Continue to The Hollywood Reporter SKIP AD
You will be redirected back to your article in seconds
Skip to main content
June 6, 2018 9:15am
Logo text

“That’s the last of my mercy. Better use it fast.”

With those words, paired with a single bullet, James Marsden’s Teddy Flood demonstrates just how much he’s changed — or been forced to change, more accurately. The gentle-hearted hero at the heart of Westworld transformed into a brutal killing machine midway through season two, thanks to Dolores (Evan Rachel Wood), who commanded the alterations in order to help Teddy survive their struggle. Even Dolores seems taken aback by how the changes have taken hold, caught off-guard in episode six, “Phase Space,” when Teddy shoots a prisoner dead in the middle of an interrogation. It’s similarly jarring to see Teddy offer a bullet to a man as a means of mercy, rather than save him from certain doom.

“The man who rode that train was built weak and born to fail,” Teddy tells Dolores, referencing his existence as a do-gooder character. “You fixed him. Now forget about it.”

'Westworld': How That Violent Season 2 Comeback Played Out

But forgetting about the Teddy who used to commute to Sweetwater by train on a nearly daily basis, picking up cans for his beloved Dolores, isn’t an easy feat — nor is it a fruitless one. Speaking with The Hollywood Reporter, Marsden says the old Teddy still exists somewhere within the current model, even if that gentler side is deeply buried beneath several layers of violent delights.

Read on for Marsden’s thoughts on his character’s arc this season, his reaction to Teddy’s apparently doomed fate as teased in the season premiere, how showrunners Jonathan Nolan and Lisa Joy are continuing to subvert archetypal expectations this season and more. 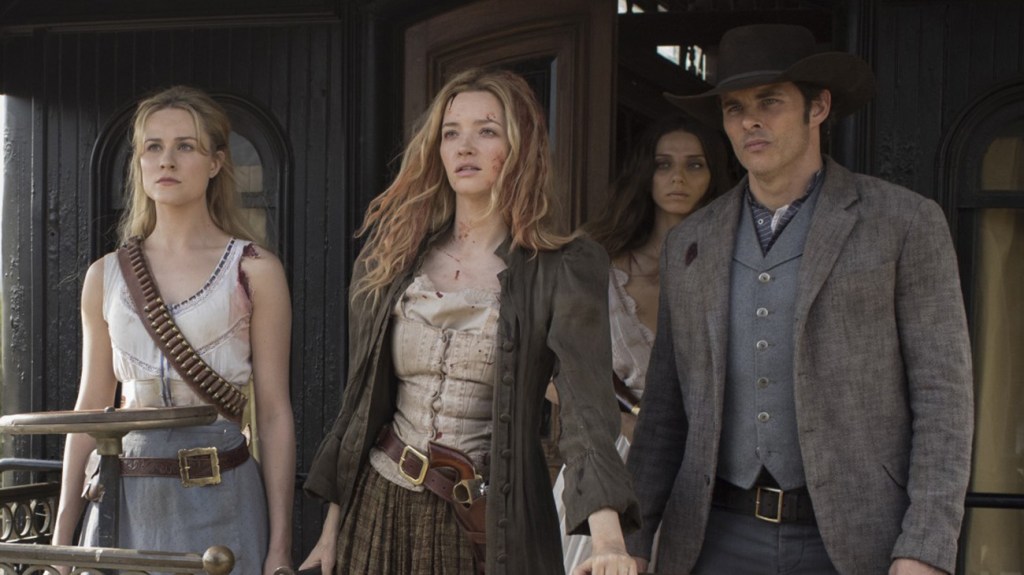 What kind of feedback have you received about Teddy’s arc this season?

The reactions have been as crazy as the journey, depending on whom you talk to. There’s a lot going on in Teddy’s head and in his programming this season, obviously. I got a text from Evan after episode five, where Dolores lures Teddy in, grabs him and changes him. She said: “OK, well, I’m the most despised person on Twitter now!” Apparently, the fans of the sweet, dedicated, loyal and peaceful Teddy were not happy to see that. But we all know if we dig a little deeper, she’s trying to help him survive. Then there’s the other group of fans who are cheering for him: “Finally, OK! Let’s see him kick some ass! He’s too nice! Let’s roughen him up!”

Right, you don’t want him to completely lose his personality and his soul. I understand the side of it that life is a little dirty sometimes and the stakes are real right now; you can’t keep getting patched up if you keep collecting bullets the way you did in the first season. But I agree with you. (Laughs.) Somewhere in the middle would be nice.

What was your experience like, learning about Teddy’s arc this season? Were you told about it upfront or did you learn more as you went along episodically?

There’s a little bit of both. Before we started shooting, I was informed of some of the arc and the changes that would be happening in the midseason, and the interesting and challenging journey that would be for me as an actor. I always thought that from the very beginning that this show has the potential to play several different characters and different levels of consciousness. You could wake up and be the professor or the sheriff. Even if there’s a feeling of loss there or a feeling of tragedy, you could become “Terminator Teddy.” There’s some excitement there as an actor.

It’s not just because you’re now playing a lethal badass, but also because it’s the challenge of playing that relationship [between Teddy and Dolores] struggling. They’re growing and changing. She’s different. He’s different. He’s awake, and they’re choosing identities that aren’t preprogrammed for them. There’s a lot of soul-searching against this deadly backdrop of survival. It was exciting to learn that at some point in the season we would be at odds about how to proceed.

In a broad, vague way, that information was given to me early on. But there are always surprises as you go along: how it goes down, when it goes down and where it all leads. A lot of that was left as a nice surprise as we went along and got the scripts. You do have to condition yourself to embrace the insanity and know you’re in great hands with these writers and showrunners. If you need to know something, they’ll tell you.

How did you react when you encountered the final scene of the season premiere: that last lingering shot of Teddy floating in the water? We’re used to seeing this character die from time to time, but was there something about this shot that felt more ominous than usual?

It was definitely a cause for concern. (Laughs.) I’ve learned to not speak in absolutes in this world. But there’s real stakes now. Upon reading the premiere episode, I wondered, “What went down? How final is this? Is it final at all?” This is a show with a lot of mystery and a lot of potential “Oh, shit, I thought it was this, but it’s actually this” moments. I did wonder, “Oh, God, what did he get himself into now? How permanent is this?” In the first season, you got a little used to the idea that he’s target practice for the guests. He’s faster than them, but his bullets don’t work on them. We left the season last year with all hell breaking loose, so when I read the episode, I wanted to see how the retelling of this unfolded as we learn how we get here. It was clear there was some drama ahead of me, but I had that lingering question: “How permanent is this?”

You very quickly become the most eager fan in the audience: “What’s next?”

Oh, absolutely. You do. When you go through this process, another thing you condition yourself to is not having all of the answers. In a movie, you read the whole script. Sure, sometimes you change things as you film; the dialogue is altered here and there. This is sort of an open-ended adventure where you don’t know exactly where you’re going. You’re told some of the main details, but not everything. I waited with bated breath to see what his fate was as well. It’s exciting, because it keeps you on your toes. You want to be involved in this world with the dawn of artificial intelligence providing so many deep, dark roads to go down. You surrender to them telling their story, and you want to be a part of it until the end. We’re fans as much as we’re part of the show. And that moment specifically? It was like, “Oh, damn. What’s going down?” 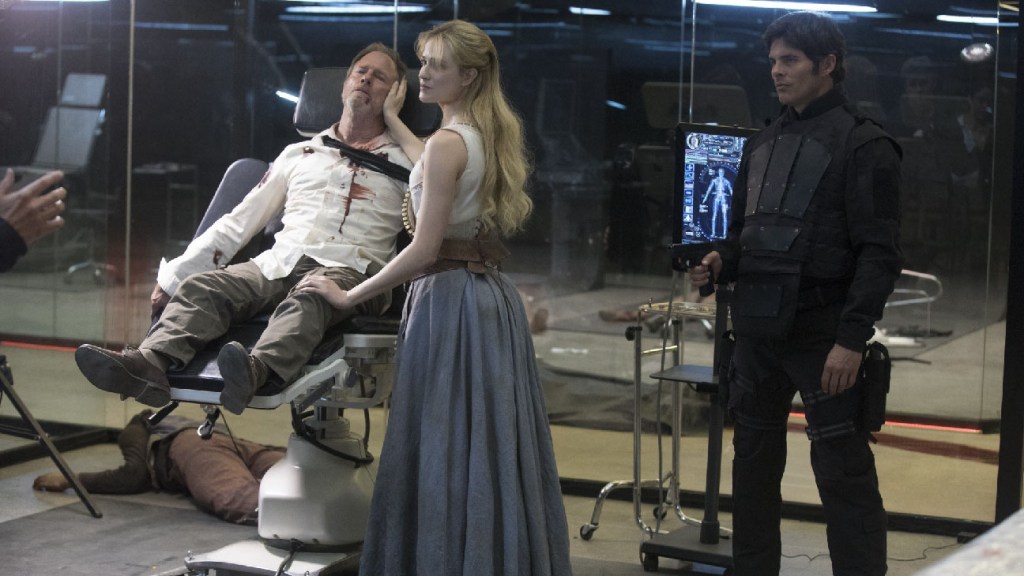 Teddy transforms in episode five. We start to see the ramifications of that change in episode six, and even more so in this past episode. As you said, part of the appeal of the show and the nature of your character is taking on different personality traits. With that said, did you feel you needed to maintain a measure of recognizability about Teddy across the two versions of the character?

That’s one of the more interesting things to me about playing this character. Underneath the programming, there’s always something with him — and you see this with Dolores, where she always flashes back to her father. She’s very hell-bent on becoming the next evolution of humans, but there’s also those flashes of vulnerability. My point is that underneath their programming, there are fragments or glimpses of what their true soul is underneath. It can be subtle and nuanced.

For me, we’re [dealing with] these archetypal characters, like Teddy, who is this classic Western hero, whose journey we have seen before. He’s the Western hero who rides off and battles the ne’er-do-wells, in protection of his love back home. He does all of that stuff to keep her safe. What we’ve done [in Westworld] is a complete gender reversal, and in that, a complete redefinition of what a postmodern hero is. Dolores is that character now, and Teddy is her right-hand man. What’s interesting to me is there are parts of Teddy that are vulnerable and have more of a conscience than Dolores has. He represents a good side of her conscience this season.

It’s a really cool redefining of those tropes, and how we define a hero. That role reversal was really interesting to me, allowing ourselves to redefine what it means to be a “male hero.” We think of these heroes as being total badasses, in control, good with guns and good at fighting — and now the postmodern hero is someone completely different. Teddy still has power; it’s just in a different way. You see that internal struggle where you see flashes of old Teddy. The soul that was really there for Teddy is having to claw its way through the programming Dolores altered, and do its best to reach up through all of that and maybe try to do the right thing. You see very few glimpses of that…

How 'Westworld' Is Putting a Major Tragedy in Motion

But you do catch wisps of it. There’s a bitterness in how he speaks with Dolores, for instance.

There’s that. It’s almost passive-aggressive! (Laughs.) There’s a sadness. I don’t think he’s completely unaware of what’s going on. There’s parts of the old Teddy that are still there. But that’s the real challenge, playing the very small nuanced moments where even if it’s just a flash in the eye, you see the old Teddy questioning this new programming. That was really interesting to play — along with finally really getting to kick some ass. But that’s easy and fun. The hard stuff is letting the old Teddy come through in glimpses.

How helpful was it for the avatar to change in this episode, with Teddy wearing the soldier’s uniform?

That always helps. It’s a little less dusty, for one. You’re actually firing 9MM Glocks. You feel like you’re wearing a full football uniform. It brings a level of intensity and invincibility that goes hand in hand with the new programming. That definitely helps the feel: a nice visual parallel with the fury going on inside of him.

We’re three episodes away from the season’s finish line. What can you say about where we’re going and where Teddy’s headed?

I can’t say much, but it doesn’t feel any less dangerous. In fact, if the curve is going one way, it’s only going up as far as the intensity, danger, and potential for catastrophe. That continues to accelerate and increase.

What are your thoughts on Teddy’s arc this season? Sound off in the comments below and keep checking THR.com/Westworld for more.