With three simple words, Westworld completely changed the landscape of its second season, bringing a familiar face back into the fold in a deadly new way: Robert Ford, played by the legendary Anthony Hopkins, or “Tony,” as he’s known around the set of the HBO drama from Lisa Joy and Jonathan Nolan (who goes by “Jonah”).

Ford first returned in “Phase Space,” appearing at the very end of the twisting hour as a digitally reborn figure within the Cradle, a virtual realm at the heart of the park. His reappearance and continued connection to the park’s chaotic events was expanded upon this week in “Les Ecorches,” an action-oriented hour in which even Ford got his hands on a firearm or two.

'Westworld': What Season 2 Just Revealed About its Digital End Game

In actuality, it’s Bernard (Jeffrey Wright) who wrapped his hands around an assault rifle, even if it was at Ford’s command. After their reunion inside the Cradle, Bernard returns to his flesh-and-blood reality with Ford’s veritable ghost in tow. “I keep telling you,” Ford says to Bernard at one point. “This is no longer my story; it’s yours.” But Ford’s actions aren’t fully in line with his words, as he repeatedly compels Bernard to make certain choices — including gunning down a hallway filled with security guards, despite an emotional Bernard’s protests against such violence.

Given recent developments, it’s no surprise that Bernard isn’t exactly thrilled about the return of Ford — even if Wright, the actor responsible for bringing Bernard to life, couldn’t have been more excited at the prospect of Hopkins’ return to the series.

Speaking with The Hollywood Reporter, the occasional Bernard Lowe (and even more occasional Arnold Weber) opened up about how he first learned about Ford’s veritable resurrection, the impact it’s having on Bernard, and what it was like to find himself stranded in the thick of the “Les Écorchés” action. 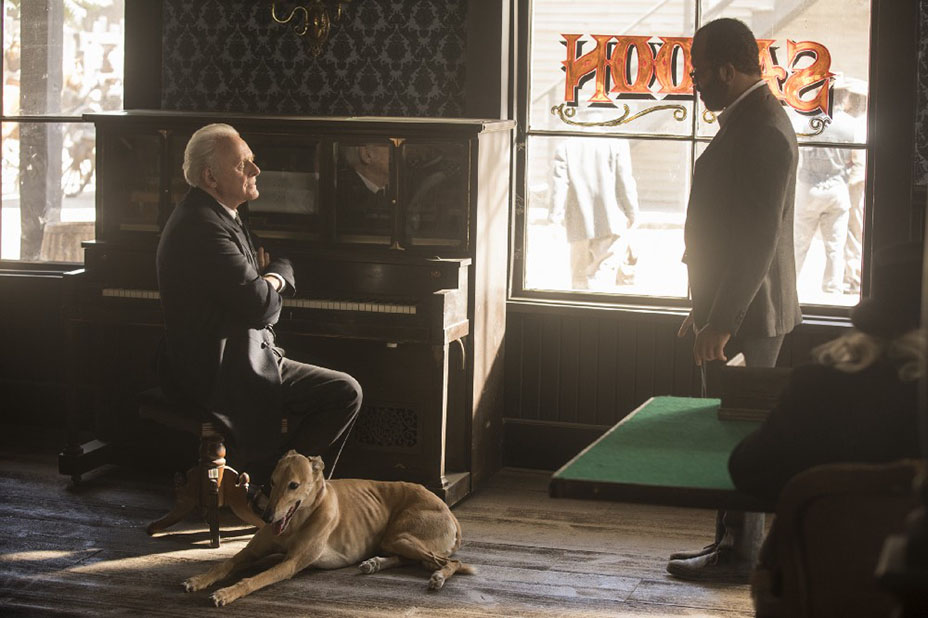 You learned early on in season one that Bernard was both a host, and that you would also be playing Arnold. Your arc this season has been very elaborate. How much were you clued in on your overall journey at the start of this year, especially in terms of tracking the different timelines?

The timelines were pretty clear in my head. They were pretty well charted out at the start of production. That said, it took a fair amount of mathematical thinking to keep track, as the narratives weave in and out of one another. That was fairly tricky stuff. As far as the overall framework of the timelines, that was pretty clear. I was not, however, given a great deal of information at the start of season two to fill me in as to where we were going. Part of the reason for that was to keep me in line with Bernard’s disorientation to some extent, I think. I think all of us have a deeply trusting relationship with Jonah and Lisa, owing to our experience working through the first season, and also out of respect for their vision. It’s a rare collaborative setting that we work within. We surrender to the limitations of what we know.

Bernard very much exists within the moment — or moments, really — of each scene. He’s trying to track his relationship on an existential level to time and space. I was right there with him. (Laughs.) But with that said, there was one element that gave me a bit more insight: working with Tony. We filmed all of Tony’s scenes right out of the gate. The first four or five weeks of filming, I had shot scenes from all over the season. I was able to fill in a few voids of information, and at least cross-pollinate information from one scene into another, to clue me in a bit more than probably was intended. I have to thank him for that.

Ford’s executed at the end of the first season, and now we know he’s not quite as dead as we once assumed. How did you react when you learned about his return to the show?

My first reaction was: “Yeah, of course! Let’s get at it!” It was such great news. Tony is the type of actor that every actor wants to work with. For me, I not only enjoyed working with him in front of the camera last season and this season, but equally I enjoyed the time we spent when the camera was not rolling. He’s great company. He occupies an almost singular space in our profession, in terms of having a career that tracks from Laurence Olivier to Westworld. That’s a pretty big sweep across the ocean. He’s got an incredible, Westworld-sized reservoir of stories about that journey, which is just fascinating. As well, he likes to dig into politics and history and the like. We have a good time on both sides of the camera.

From Bernard’s perspective, it would seem he’s less pleased about Ford’s return.

Bernard, like all of the hosts, is trying to reconcile himself with his new place within this chaotic setting. He, like everyone else, is trying to survive and trying to determine what his freedom is and how he attains it. It seems that journey circles back into Ford once more. But there are some things about that relationship that need addressing. He’s there now. As we go forward toward the end of the season now, we’ll dig down deeper into that.

We have come to know Bernard as an even-tempered and often gentle man, who is as horrified by his capacity for violence as anyone else. It’s why it’s so upsetting to watch the scene in this past episode where Ford opts to “ease [Bernard’s] conscience,” taking control and using Bernard’s body to kill those humans. It’s agonizing, really.

In addition to the turn between Bernard and Ford, this episode was incredibly action-filled as well. You had a front-row view of that violence during the scene in which Ford guides Bernard to the control room, which has descended into utter chaos. What did you see from that vantage point?

What I love about working on our show is being in a room or series of rooms with folks who are at the top of their game and at the top of their field, and are fully committed to fleshing these stories out in as dynamic a way as possible. Doug Coleman is our stunt coordinator, and among our [stunt team], there’s a group of veterans, former U.S. military service members. Many of those people playing the paramilitary types on our show are veterans, fully committed to what we’re doing, and giving their all. Combine them with the stunt guys, but also the space in which we’re operating, built by sets of designers and carpenters and electricians who are all trying to amp this thing up to the next level. That scene, like all of our scenes, is really a culmination of all of that work coming together. You’re kind of existing on these sets and within these scenes with all of these players around you who are giving you the fullness of the story at that moment. It’s fully immersive; you’re just there. We capture it on film beautifully, at times in anamorphic, and when it all comes together, it’s Westworld. There’s so much content available now. We just want to carve out our own space and do it beautifully. That’s what we’re going for every day.

What do you make of the return of Robert Ford, and Bernard’s subsequent reality? Sound off in the comments below, and keep checking THR.com/Westworld for more.