[Warning: This story contains massive spoilers for the seventh episode of HBO’s Westworld.]

Bernard Lowe (Jeffrey Wright) and Theresa Cullen (Sidse Babett Kndusen) are on their way toward a discovery. The two former lovers and colleagues stand next to each other in an elevator, traveling to a secret cottage in the park where Robert Ford (Anthony Hopkins) builds and shelters his own private hosts. Theresa attempts to explain why she’s been working against Bernard’s best interests as the Delos board prepares to oust Ford from power.

“The longer I work here, the more I think I understand the hosts,” Bernard replies. “It’s the human beings who confuse me.”

What comes across as a throwaway line becomes much more nuanced mere minutes later, as Bernard and Theresa arrive at not just the cottage but a stunning and fateful conclusion: Bernard is not a human. He’s a host, designed by Robert Ford to do Robert Ford’s bidding. “He’s been very loyal for many years,” Ford tells Theresa. Bernard is thoroughly floored by the reveal — until Ford commands him to calm his emotional affect, much as Bernard and other techs have done to hosts countless times through the series. In this cold mechanical state, Bernard carries out Ford’s next order: to kill Theresa. It’s a stomach-churning display of violence, marking not only the first time a host has killed a human on screen (as far as we know), but also a jarring shift from Bernard as a good-hearted scientist into a murderous machine.

As much as the moment is designed to leave viewers reeling, it didn’t come as much of a shock to Jeffrey Wright. The actor has known about Bernard’s secret for some time now, first learning the news after completing the pilot. For more, THR spoke with Wright about his initial reaction to Bernard’s true nature, how the reveal unfolds on screen and how it will impact the character moving forward.

Jonathan Nolan and Lisa Joy first told you that Bernard is a host after you filmed the pilot. What do you remember about those early conversations?

Well, the first conversation hinting at this was actually before that.… After we had spoken a few times and we had Skyped a few times, and I had read the script, I sent [them] a note: “I’m really looking forward to going on this journey with you in which we discover that Robert Ford is actually a creation of Bernard’s.” And he replied: “Close, colonel, but no cigar.” (Laughs)

So you were on the path.

But oddly enough, I did not at all suspect that Bernard was a host. At all! Not until after we shot the pilot. Not until we started rehearsing for the season. Lisa was hinting at Bernard’s complexity, and that “there’s going to be a lot for you to do, Jeffrey!” And I was saying, “OK! He’s obviously at the center of unraveling the mysteries here.” But at the same time, she would describe him as understated. She perceived him the way I perceived him as well: as very much an everyman window on the world of the show, on the multiple worlds of the show, in that he crosses over between the tech side and the Western side. But at one point, she said, “I need to have a talk with you. I need to have a meeting with you.” She pulled me into an office and was unusually inarticulate, because she’s normally incredibly articulate. She was kind of stuttering around for 30 or 45 seconds: “Bernard is very complex, he’s very complex.” And then she was like, “How do I say this? Well, Bernard’s a host.” And my heart stammered for a few seconds. Then I just said, “Cool!” I was really kind of floored by it, but excited as well. It added some obvious additional dimensions to the character. It made the tone of the character and his modesty and straightforwardness, it amplified it to some degree, as a foil against his secret. That he just passes through, he walks through that world, without glitter and without veneer, and just entirely under the radar.

The scene in which the reveal plays out is stunning and nauseating on a few fronts. What are your memories from shooting the scene?

What I was hoping, and I think what we all agreed that we would aim for, is kind of a clinical severity in terms of the act. The dispassion of a machine. But making the transition from what we perceive to be this full blooded everyman to that was a bit tricky. His realization that he’s been living this fraud was complicated to consider, because what does that type of almost schizophrenic breakdown…how does one play that? We were aided by the place in which it takes place, because what we play as he enters the space is a familiarity. There’s a weird familiarity with that place, in that it represents his womb. That was fun. It provided some assistance when Ford shoves the cold reality of who Bernard is into his face.

One of the promises of Westworld is that the hosts are on a journey of self-discovery, and certainly in the case of the film, it manifests in the form of hosts killing humans. Now we’re at that moment in the show, but in an unexpected way. We not only learn that someone we thought was human is actually a host in Bernard, but he then proceeds to kill his lover, Theresa. What do you think it means for the show to start fulfilling that promise through these two characters? It feels especially tragic to tell that story through the lens of Bernard and Theresa.

I agree. And I think that the absence of humanity in Bernard’s killing of Theresa is the threshold through which I think we understand that anything is possible here. We’re not in Kansas anymore. It was certainly one of the starkest choices that Lisa and Jonah could have made as a way of defining how treacherous this place is.

There’s an appropriately mechanical way in which Bernard prepares for the act of murder — taking his coat off, removing his tie, very gently placing everything on the table…

For him, I think it’s a mathematical consideration of what is the most physically efficient means of destroying this person. It’s a part of his calculus in determining how to follow the directive he’s just received from Ford. It’s down to the pure considerations of physical efficiency. “This jacket is encumbering me. The force with which I can deliver her into the wall will be diminished by 25 percent if I keep this jacket on.” (Laughs) That’s really what the thinking was. 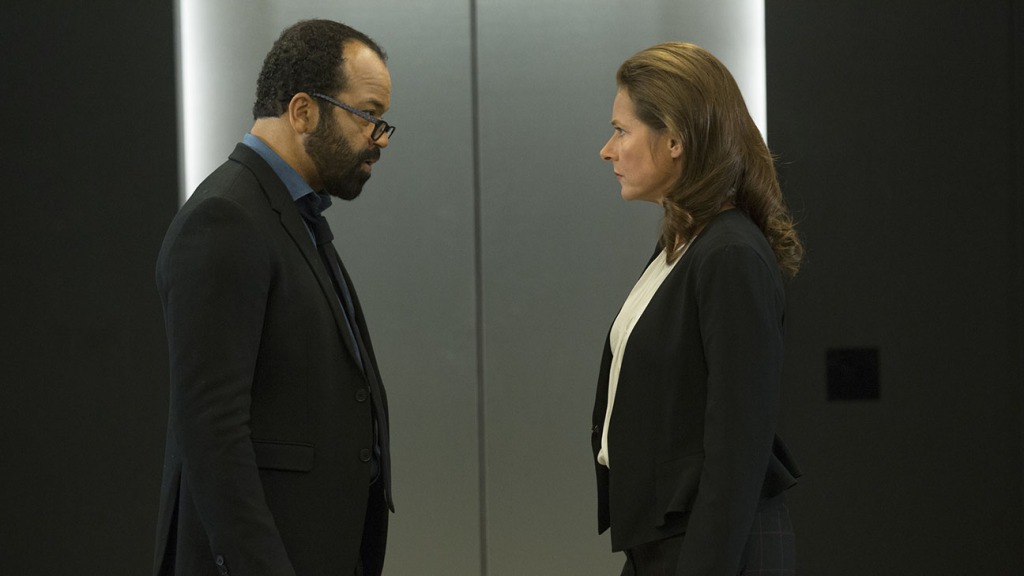 It’s a powerful scene for many reasons. It not only fundamentally alters what we know about Bernard, but it also removes a character from the board in Theresa. It’s an emotional moment for you, as you’re finally revealing this side of the character, but equally powerful for Sidse is that this is her exit.

I remember keenly that she never let on that she was only contracted for seven episodes. We each had certain secrets in our pockets that we held from everyone else in the cast. That was hers. I think she played that scene beautifully. The discovery of the schematic, the realization that she has fallen to the absolute bottom of the rabbit hole. It’s just wonderful what she does there. Again, from my perspective, I didn’t see any of that. It was my intent to be completely oblivious to all of it, which is what was called for. The truth is, I think Sidse had some ideas about how she wanted to exit stage left, but in the end, we all came to the conclusion that it would be nasty, brutish and short. That’s where we went with it.

You have had so many terrific scenes with Anthony Hopkins on this show already, and this one is another standout. There have certainly been moments of danger with Robert Ford before, but this feels like Hopkins going “full Hannibal.” What do you remember about watching him work in this scene?

The reveal that Bernard is a host is a huge moment for the show, and of course it’s fundamental for the character. Bernard has been very invested in the Arnold mystery and exploring the nature of consciousness in the hosts. Now, to learn that he himself is a host…how does this sit with Bernard, as much as you can? It’s fundamentally life-altering, to say the least.

Yeah. Life-altering, or something like that. (Laughs) I think what becomes clear is that Bernard…the journey that he’s been on toward understanding the nature of the technology and the nature of the park is as well a journey of self-discovery and we now understand that his journey is in some ways a parallel journey to Dolores’. He becomes fully immersed in wrestling with the nature of his own consciousness, much in the way that Dolores has for the better part of the season.

'Westworld': 10 Key Moments From the HBO Drama's Biggest Episode Yet