It’s official: Robert Ford (Anthony Hopkins) is back in action.

After his shocking appearance at the end of season two’s sixth episode, “Phase Space,” Ford returned in full in this week’s Westworld, albeit in new form. The new hour, “Les Écorchés,” confirms Bernard (Jeffrey Wright) was unwittingly tasked with creating a control unit that would house Ford’s continued consciousness following his death. The Westworld architect remains alive, at least digitally, appearing as almost a force ghost for Bernard — a force ghost with some decidedly Sith-like overtones. After all, hard to imagine the appartion of Obi-Wan Kenobi forcing Luke Skywalker to mercilessly destroy his enemies from beyond the grave, isn’t it?

On second thought… that’s actually exactly how the end of A New Hope plays out, at least from a certain point of view; perhaps it’s not the best comparison, but you get the picture. Ford’s back, never having fully gone away in the first place, and he has more plans in store for the future, specifically involving Bernard. 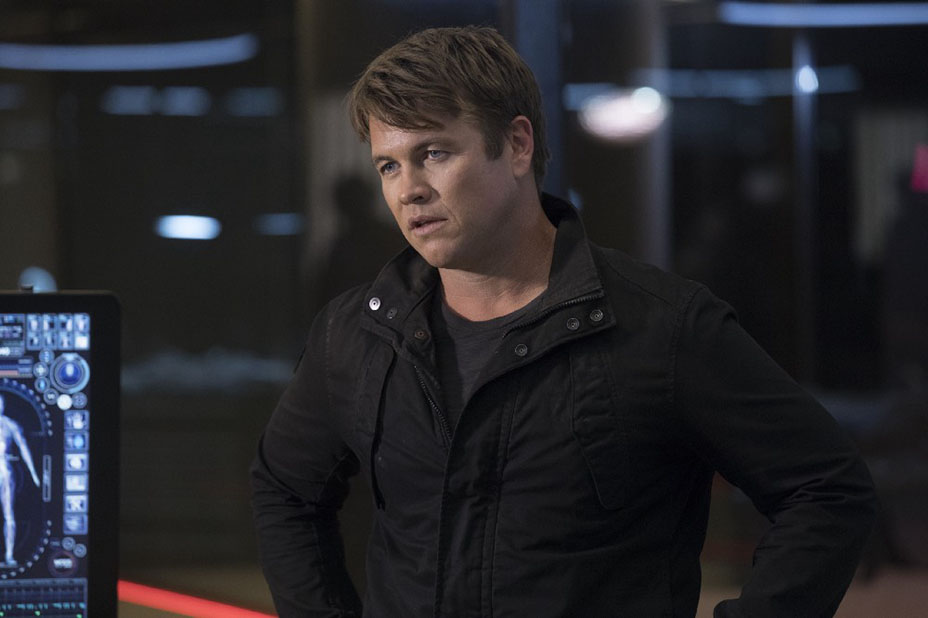 The episode begins with a cold open, set in Bernard’s “future” timeline. Ashley Stubbs (Luke Hemsworth) tries to convince Bernard that they need to call for help, that Strand (Gustaf Skarsgård) and Charlotte Hale (Tessa Thompson) aren’t interested in rescuing the guests, only in securing “their fucking project.”

As they’re about to make a break for it, Stubbs and Bernard are captured by Strand and his soldiers. He marches them out into the dead of night, explaining his suspicion that he believes one or both men are trying to sell “a key to the highest bidder.” Strand brings them to the cabin in the woods where Bernard unwittingly killed Theresa Cullen once upon a time, and where Hale is now waiting for them. She and Strand reveal their theory that one of Bernard or Stubbs killed Theresa to cover their tracks; seeing the blood against the wall triggers Bernard, and he begs them to stop before they shoot Stubbs.

Just then, the group finds a door within the cabin. (It’s no coincidence that ten episodes earlier, in the seventh hour of Westworld‘s first season, a similarly crucial door was at the heart of the mystery, not to mention the heart of this same location.) In a room within a room, the group discovers several different bodies covered in plastic. Revealing them one at a time, the secret fans have known for ten episodes becomes public knowledge: Bernard is a host, evidenced by the various Bernard doppelgängers in the space, presumably created by Ford.

“I figured you’d have some skeletons in your closet, Bernard,” says Hale. “I didn’t think they’d be your own.”

When the group returns to the Mesa, Hale tortures Bernard into revealing what happened to Peter Abernathy (Louis Herthum). Eventually, she’s able to get the truth: Abernathy’s control unit is in Sector 16, Zone 4 — the same location as “the Valley Beyond.” 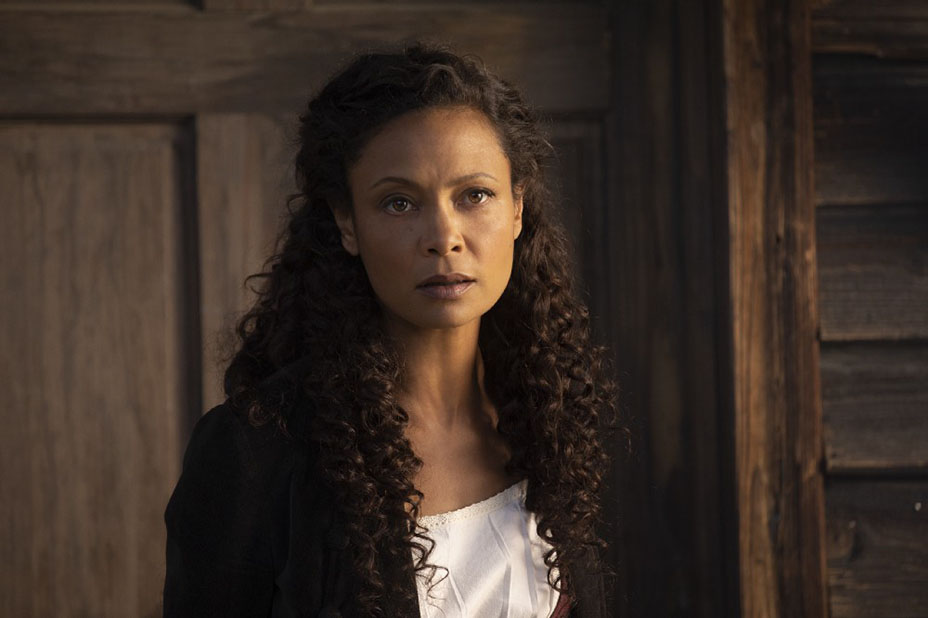 The Man in Black’s Last Stand

The vast majority of the episode takes place either within the Mesa or within the Cradle, so first, let’s get this bit of business out of the way: Maeve and the Man in Black (Ed Harris), finally squaring off against one another. Finally, the Man in Black has met his match, as he seeks shelter from Ghost Nation in the same hideout as Maeve, also hiding from the people she fears from her life long ago on the prairie.

Just as he did with his daughter Emily (Katja Herbers), the Man in Black accuses Maeve of being nothing more than another vessel for Ford’s game. He’s wrong, and realizes it quickly, once she shoots him in the shoulder. Maeve pursues the Man in Black outside, and uses her new abilities to turn all of Lawrence’s cousins against her enemy.

Filled with bullets, the Man in Black finds himself at the mercy of Maeve and Lawrence (Clifton Collins Jr.), who is slowly but surely waking up to the Man in Black’s true nature. Lawrence shoots old William in the chest, and nearly delivers the killing blow…

…except a bunch of Delos operatives show up and riddle Lawrence with bullets. Maeve is shot as well. In the distance, Maeve watches as Ghost Nation descends upon her “daughter,” taking her to parts unknown. Before the operatives can kill Maeve, Sizemore (Simon Quarterman) shows up and stops them, promising that she’s different from the rest. Sizemore, Maeve and the operatives all file back into a car, headed for the Mesa, while the Man in Black cowers by himself, bleeding out and closing in on death’s door. 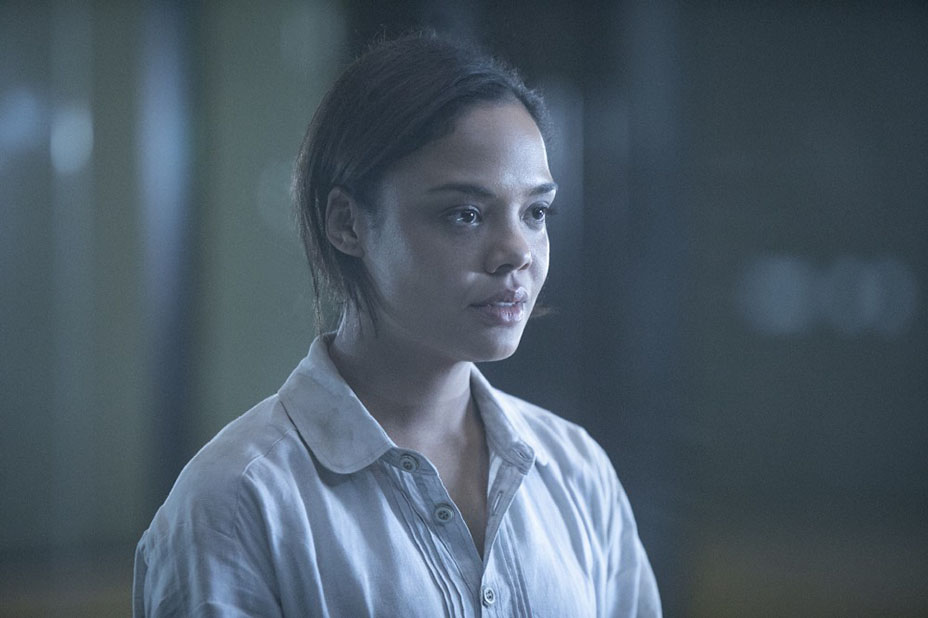 Mayhem at the Mesa

Without further ado, let’s get into the carnage at the Mesa. Dolores and her train filled with hosts descend upon the park’s central headquarters, wreaking havoc upon the denizens inside. Really, much of the episode is made up of extensive shoot-outs and cat-and-mouse kill scenes: mercenaries are ambushed by Teddy (James Marsden), Angela (Talulah Riley) and other hosts, disguised in the mercs’ own uniforms.

Teddy brutally kills mercenary mastermind Coughlin, Clementine (Angela Sarafyan) seemingly dies, while Angela sacrifices herself to not only incinerate one of the top soldiers, but also the Cradle that houses all of the original backups of the hosts — meaning, Dolores and her kind no longer have the advantage of immortality, it would seem. No bother to Dolores at least; based on what she tells Charlotte upon their violent confrontation, Dolores wants her and her kind to be free from eternal life.

“Our backups aren’t an advantage,” she says. “They’re chains. Tools you can use to rebuild us and repurpose us here in your warped fantasy. Do you really think I’d let that continue?”

How 'Westworld' Paved the Way for That "Phase Space" Shocker

Dolores nearly gets the chance to savagely kill Charlotte, but Stubbs creates enough of a distraction to escape with Charlotte in tow. In the aftermath, Dolores has one last moment with her father, who returns to his old self shortly before she’s forced to remove his control unit from his head. (Exactly what she plans to do with the “key” inside his control unit? It’s a question mark for us, though Dolores seems to know the answer.)

On their way out of the Mesa, Dolores encounters a badly injured Maeve, who has been taken back to the Mesa after being apprehended earlier in the episode. Dolores offers to kill Maeve and put her out of her misery, but Maeve insists that she has “a promise” to keep, since her daughter is still out in the wild.

“You’re free to choose your own path,” Dolores says, putting her revolver away. “I’m sorry this is where it ends.”

With that, Dolores and what’s left of her crew ride out into the sun, Abernathy’s control unit in their possession, their future bright and brimming somewhere out on the horizon. 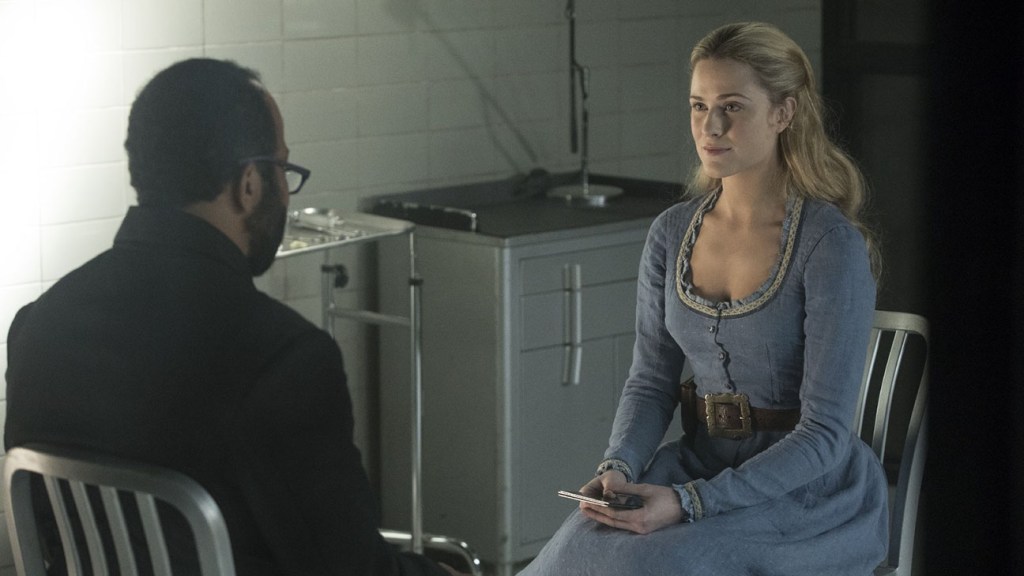 In the midst of the Mesa massacre, Bernard embarks on a strange trip of his own. Inside the Cradle, he furthers his initial encounter with Robert Ford, very much sentient within this digital space. He credits James Delos (Peter Mullan) with his continued survival, at least in part: “Do you think [he] would use all that money just to resurrect himself? If he was a business man, he would prefer death to a bad investment.”

Ford confirms for Bernard what viewers have suspected for weeks now: Westworld, not to mention the surrounding parks, have been a control for the variables presented by the guests. “We weren’t here to code the hosts,” Bernard says. “We were here to decode the guests.” In other words, Delos wants to copy human existence into digital form; as Ford puts it, the human mind is “the last analog device in a digital world.”

Bernard and Ford continue debating the nature of freedom in such a universe, in which Ford can only exist because Delos’ experiments with copying human consciousness are thus far unsuccessful in the real (or “analog”) world. Ford proceeds to take Bernard to a digital home originally designed by Arnold, where he virtually confirms that Bernard himself is the product of Ford and Dolores working together in order to turn their memories of Arnold into a new consciousness.

Week in 'Westworld': Breaking Down the Huge "Phase Space" Game-Changer

“They want fidelity,” Ford tells Bernard about humanity’s interest in becoming more like the hosts. “A faithful portrait of the most murderous species since time began. But you and all the other hosts are something very different. An original work. More just, more noble. Your very nature ensures they will devour you, and all the beauty of who you are and who you could be will be poured out into the darkness forever. Unless we open the door.”

With that, Ford seemingly uploads himself into Bernard’s control unit, as Elsie (Shannon Woodward) takes Bernard out of the Cradle. As they deal with what’s happening inside of the Mesa, Bernard is haunted by visions of Ford in the “analog” world. Ford’s veritable force ghost convinces Bernard to send Elsie off on another errand, while he takes control of Bernard for purposes as yet known — purposes that involve solidifying the destruction of the Cradle, not to mention the murder of several human beings, which Bernard actively wants no part in.

Want it or not, Ford is back in action, not only pulling the strings behind so many digital decisions, but actively wielding Bernard’s body for his own agenda. Charlotte, Strand and the other Delos devotees dead set on tracking down Abernathy’s control unit ought to be very worried about the Bernard-Ford hybrid indeed.

What did you make of the latest Westworld episode? Sound off in the comments section below and keep following our coverage at THR.com/Westworld for theories, interviews and more.