“Take my heart when you go.”

The oft-repeated phrase in “Kiksuya,” written by Carly Wray and Dan Deitz and directed by Uta Briesewitz, is as apt a description of the emotional episode as one can muster. The eighth hour of Westworld season two focuses almost entirely on Akecheta, the Ghost Nation warrior played by Fargo and Longmire alum Zahn McClarnon, offering an unexpected detour away from the main action of Dolores (Evan Rachel Wood), the Man in Black (Ed Harris) and Maeve (Thandie Newton), while not entirely free of those iconic characters.

The result: the most moving episode of the series yet, epic in scope and soul, simultaneously personal and massive in how it reframes not only the Ghost Nation corner of the park, but the show’s themes and arcs at large.

While the majority of the installment focuses on Akecheta (and is presented largely in the Lakota language as a result), it opens on the Man in Black, gravely injured after his encounter with Maeve one episode earlier. “Don’t you do it,” he croaks, bloodily coaching himself as he crawls toward a nearby river. “You’re not dying here. Not yet.” And he does’t, thanks to the arrival of Akecheta, who calmly (if lovelessly) brings the Man in Black to his camp. His reasoning: “Death is a passage from this brutal world. You don’t deserve the exit.”

Akecheta leaves the Man in Black and strikes up conversation with Maeve’s daughter, and begins to explain to her who he is and where he comes from. An extended flashback sequence occurs in which Akecheta sketches out his past, how he once lived “a warm, easy live” with his wife Kohana (Julia Jones), riding out to outskirts of the park, observing beautiful sunsets. One day, he came upon the massacre in Escalante, where he found the consciousness maze created by Arnold (Jeffrey Wright). From that moment onward, Ake became obsessed with the symbol for the maze, carving it into skins, drawing it in the ground — marking it everywhere.

Before he could understand the meaning of the maze, Akecheta’s entire life changed, as the powers that be transformed his idyllic existence into something more savage: a “strong and silent type,” someone whose brutality would encourage the right amount of fear within the park’s guests. Even in this new incarnation, Akecheta says he still felt “the presence of others, the lives I was forbidden from taking,” referring to the guests. He even encounters one in the wild: Logan (Ben Barnes), naked and crazy from exposure to the sun, after being set loose by William (Jimmi Simpson) at the end of season one.

Logan’s words “cracked something open” in Akecheta, causing him to realize that he had lived another life before his darker existence. Realizing it was not his true life, Akecheta journeyed out into the wild once again, stumbling upon the dig site that William once showed Dolores — the same place that appears to be “the Valley Beyond,” or “the Door,” as Ake comes to know it. He became obsessed with finding his way out of “the wrong world,” but not without Kohana at his side. With that in mind, Ake kidnapped “Koha” from her home, brought her out into the wild, and reminded her of their former life together through their old way of expressing love for one another.

Akecheta: “Take my heart when you go.”

Kohana: “Take mine in its place.” 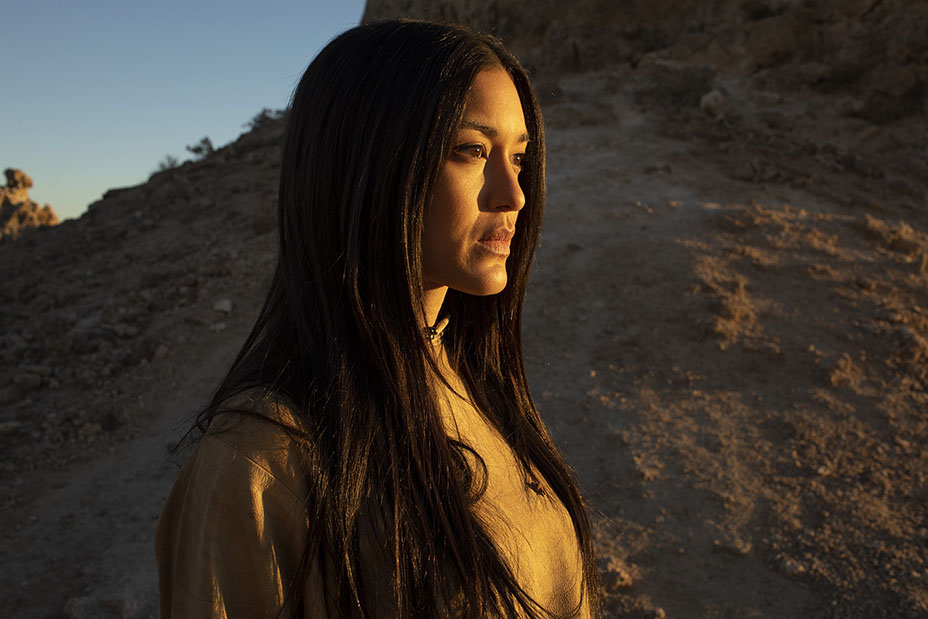 For a time, Akecheta and Kohana continue their trek toward “the Door,” but lab techs eventually discovered and apprehended Koha. Ake spent the next stretch of his life searching for his love, doing everything in his power not to die. “I feared if I died, I would lose even her memory,” he explains to Maeve’s daughter, adding that on his darkest and most wounded day, Maeve’s daughter nursed him back to health: “You gave me the strength to keep going. You saw me for who I really was.”

Eventually, Akecheta noticed that it wasn’t just Kohana who went missing, but other hosts as well, which leads him to a new idea: “I had searched everywhere for my love, except the other side of death.” With that, Ake finally allowed himself to die, and once on “the other side,” he searched the Mesa for Koha, all to the mournful tune of a cover of Nirvana’s “Heart-Shaped Box” — only to find a virtually lifeless Koha in cold storage, alongside hundreds of other decommissioned hosts.

“That was the moment I saw beyond myself,” Akecheta tells Maeve’s daughter. “My pain was selfish. Because it was never only mine. For every body in this place, there was someone who mourned their loss. Even if they didn’t know why.”

In light of this epiphany, Akecheta redirected his efforts to waking other hosts to their existence, sharing the symbol with not only his own fellow members of Ghost Nation, but others in the park — including Maeve and Maeve’s daughter. Akecheta explains that the violent memories Maeve has of Ghost Nation are not nearly as nefarious as she and we have been led to believe. Instead, Akecheta was simply trying to wake them to consciousness, thanks to the kindness Maeve’s daughter showed him once during his search for Kohana.

“I wanted to warn you,” he explains, “but in this world, it’s easy to misunderstand intentions.”

As the years passed, Akecheta’s numbers grew, and one day, he “met the man who put us to sleep in the first place”: Robert Ford (Anthony Hopkins). Akecheta and the grandfather of Westworld encountered each other in the night for a meeting of the minds, in which Ford was genuinely taken aback at Akecheta’s curiosity.

“My primary drive is to maintain the honor of my tribe,” according to Akecheta, “and I gave myself a new tribe to spread the truth: that there isn’t one world, but many. And we live in the wrong one. This will help them find the door. I believe there is a door, hidden in this place — a door to a new world. And that world may contain everything we have lost, including her.”

“I built you to be curious, to look at this empty world and read meaning into it,” Ford responds to his creation. “All this time, you’ve been a flower growing in the darkness. Perhaps the least I can do is offer some light. When the Deathbringer returns for me, you will know to gather your people and lead them to a new world. Keep watching, Akecheta, for a while longer.”

Week in 'Westworld': What's Ahead in the Ghost Nation Origin Story

The Deathbringer, it turns out, is another name for Dolores — the woman who killed not only Arnold, but eventually Ford. As before, Akecheta once again discovered the carnage in Escalante, alerting him to the heightened stakes of the present situation. He now knows it’s time to gather his fellow woke hosts and head for “the Door,” in order to move on to a better plane of existence.

With his story fully told, Akecheta and the show at large reveal that this origin was not only shared with the audience and Maeve’s daughter, but another viewer altogether: Maeve herself. In the Mesa, Maeve’s body is being studied by a scientist who confirms the theory that the so-called “witch” of Shogun World derives her powers from connecting with the mesh network between hosts — a network she’s been using all this time to watch and listen to Akecheta through her daughter’s eyes and ears.

“We will guard your daughter as our own,” Akecheta tells Maeve, knowing who he is speaking to as he stares into her daughter’s eyes. “If you stay alive, find us — or die well.”

Maeve responds with the final words of the episode, speaking in Lakota, delivering the most emotionally impactful line of the entire series: “Take my heart when you go.”

What did you think of the emotional Ghost Nation episode? Sound off in the comments below and keep checking THR.com/Westworld for more coverage.