Few things are ever quite as they seem on Westworld, but actor Ben Barnes has a different way of framing the series’ often confounding narrative.

“Our showrunners, being who they are, have found ways to subvert everything,” he tells The Hollywood Reporter. “You’re never quite sure when you are.”

Barnes, who also stars on Netflix’s The Punisher as antagonist Billy Russo, knows a thing or two about the fluid relationship between Westworld and time. As Logan Delos, Barnes’ scenes have all been relegated to the long ago past, years before Dolores (Evan Rachel Wood), Maeve (Thandie Newton) and the other hosts embark on their present quests of consciousness. At first, the murkiness surrounding Logan’s “whenabouts” wasn’t immediately clear; over the course of season one, however, fans began to suspect that the black-hat businessman and his gentle-hearted soon-to-be brother-in-law, William (Jimmi Simpson), were at the park at a moment in time long before the bulk of the action, an origin story of sorts as William was on a collision course with becoming the Man in Black (Ed Harris).

In season two, curiosities involving time remain a major factor in both William’s and Logan’s stories. The big difference this year? Viewers know exactly when William and Logan are … except for when they don’t. Speaking with THR, Barnes points to the the season premiere’s first 15 minutes, which feature Jeffrey Wright as Bernard (or at least a Bernard lookalike) at two distinct moments in time.

“You’re watching Jeffrey Wright on the beach,” he says, “and you’re watching him at an unspoken amount of time earlier running away from [the assassination of Robert Ford]. Already, you’re being toyed with in terms of when you’re watching. It’s only going to get more intriguing as it goes.”

For Barnes, the fact that the show covers a vast swath of time means he now has the ability to play Logan at multiple points in the character’s life. The notion was plain and clear in the most recent episode, “Reunion,” which marked Logan’s season two debut: one scene near the beginning of the hour in which Logan is seduced by a room filled with hosts, and another scene near the end in which Logan bemoans the fall of humanity at the hands of this revolutionary new technology. Sandwiched between those two scenes: Everything viewers saw from Logan in season one.

“It’s almost as if you’re seeing the parenthesis of the man, before and after the events of season one,” says Barnes. “You see him when he’s working for Delos, for his father. You realize that he’s the one whose interest has been piqued by this technology. He’s the one who decided that this is the most extraordinary thing for the future, and the way to move forward. And then you also see that bracketed with him after the fact, when he’s been broken by the park. He’s the first person to realize this is our doomsday. ‘These fools… they know not what they do.'” 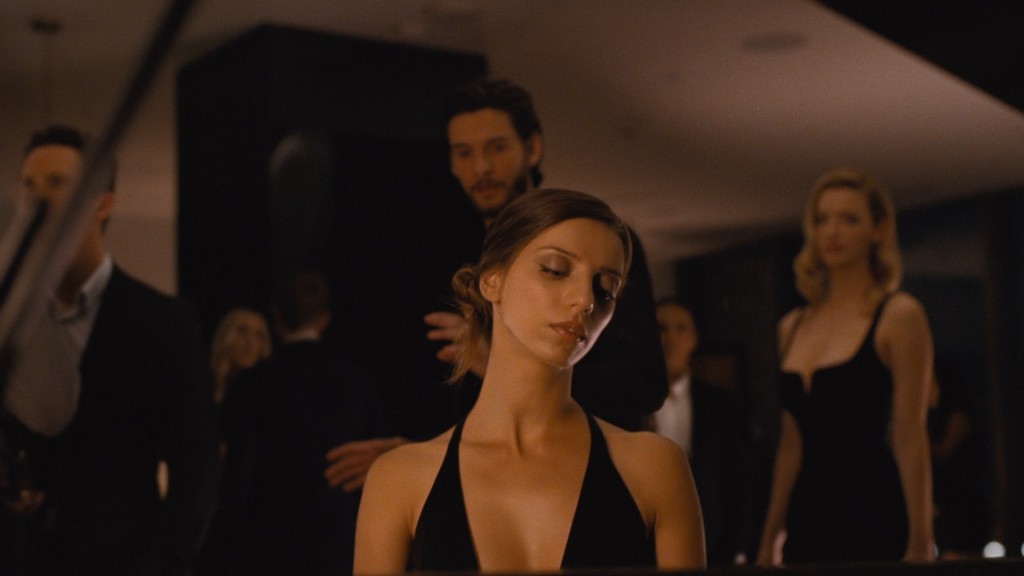 “For all of his douchebaggery in the first season, I wanted to make sure he was always truthful and never lying,” he continues. “It was his one redeeming quality. You see that highlighted and really brought to the fore in this episode. He’s someone with a mind on the future, and is quite open about things. He’s also the first to be burned by it; he’s the one who is sentient enough and awake enough to realize that this is it for everyone. He just doesn’t have the core character to be a person who would stand up and do something about it, because he was broken by William and by himself. You’ll find out later on that there are other things in his family that have broken him as well.”

“It’s not a 10-minute horse ride,” Barnes says about what happened after Logan’s final moments in season one, stopping short of confirming whether we’ll see that aftermath in season two. “He’s tied to a horse and he’s slapped off into the desert, and he can’t get off. He can’t get out of the sun. He can’t eat. He can’t drink. He’s been beaten. William held a mirror up to him and said, ‘By the way? You’re not this powerful thing you think you are. You’re not untouchable. You’re vulnerable and you’re pathetic.’ He knows that about himself deep down, I think, and for someone to say it back to him? It’s not something he’s capable of dealing with. Add to that what happens to him after he rides off into the desert — whatever that might be.”

The inner nature of Logan was at the core of his first season-two episode, and to hear Barnes tell it, we haven’t seen the last of the man’s post-park experience.

“I felt honored that the people who make this show trusted me so much to deliver something entirely different from what was asked of me initially,” he says. “They cast me to play this naughty and mischievous punk, to add a bit of fun and flavor to the proceedings while everyone’s struggling with the nature of their consciousness. And then they turned around and said, ‘Hey, we want to see a completely vulnerable and broken and slightly crazy version of that man. We want to scoop out the center of this person.’ It was really fun to do.”

What do you make of Barnes’ role as Logan this season? Let us know in the comments section and keep checking THR.com/Westworld for more coverage.