Continue to The Hollywood Reporter SKIP AD
You will be redirected back to your article in seconds
Skip to main content
March 19, 2018 10:09am
Logo text

At the end of the first season of Westworld, several characters reached the center of the maze. At its heart: not a wheel of cheese, but something even more delicious — consciousness.

With self-actualization firmly on the minds of the hosts at the heart of Jonathan Nolan and Lisa Joy’s heady HBO series, season two looks to expand upon its thematically rich exploration of what it means to be alive. In a new interview, the showrunners offered some curious insight about their creative process, including the fact that they have given unofficial titles to each of their seasons… titles that are telling about what’s on the given season’s mind.

“We think of our seasons as discrete components in the series, to the point where we’ve named our seasons,” Nolan tells EW. “The first season was called ‘The Maze.’ The second season is called ‘The Door.'”

Right away, possibilities emerge for what “The Door” might represent, given what we learned in the first season — lessons learned both within the context of the world in which Westworld exists, and lessons learned about the way the story is being told by its creators.

As a starting point, there’s the most buzzed about surprise from the first season finale: Shogun World, the theme park both Maeve (Thandie Newton) and viewers alike learned about for the very first time in the tenth episode of the series. In her escape attempt, Maeve comes upon a room where several hosts are engaged in swordplay, a sight that’s very unfamiliar given the wild west palette of the series up to this point. Does “The Door” refer to a way into Shogun World? For what it’s worth, at Comic-Con in 2017, HBO’s Westworld activation included a pulsating door marked by the Shogun World logo. Perhaps it was an early tease at a literal door we’ll see featured in season two.

That doesn’t look like anything to me. #Westworld #SDCC pic.twitter.com/ZGg4wAy8QH

Outside of Shogun World, there’s already one door that’s played an enormous role in the Westworld narrative: the one found in the cabin in the woods where Robert Ford (Anthony Hopkins) kept host replicas of his own family. In one of the most shocking sequences of the series, Bernard (Jeffrey Wright) and Theresa (Sidse Babett Knudsen) explored the cabin to find out what exactly Ford was planning in secret. Here, Theresa discovered a door that led to a subterranean laboratory — but at first glance, Bernard couldn’t see the door. This was the final clue before the official reveal that Bernard was actually a host, confirming the theory many fans held onto all along.

Unless there’s something specific to explore further in Ford’s cabin, it doesn’t feel especially likely that this particular door will stand right at the heart of season two. But a similar door? Given the various outposts all around the park, it’s incredibly likely that one or more hosts could come into contact with brand new doors — entrances and exits toward the great unknown — and will have an easier time seeing them now, assuming they start to realize the nature of their true existence ala Maeve, Bernard and Dolores (Evan Rachel Wood).

Whatever literal doors exist in season two, they will all be built around a metaphorical idea, one that speaks to Nolan and Joy’s vision for the HBO drama’s sophomore run. According to Nolan: “If the first season was a journey inward, this is a journey outward. … This is a search for what else is beyond the park, and what else is in the park. Are there more parks? How big is the park? What’s beyond the park?”

'Westworld' Season 2: All the Details (So Far)

The human characters on Westworld should know most of the answers to these questions, given their lives in the outside world. But with the show so focused on the hosts, it could be a while before they as characters and we as viewers step through the proverbial door and finally come face-to-face with the answers everyone is seeking.

For what it’s worth, there’s one theory about the door we feel comfortable enough to shoot down at this early point. Whatever the door is, it probably won’t involve this guy: 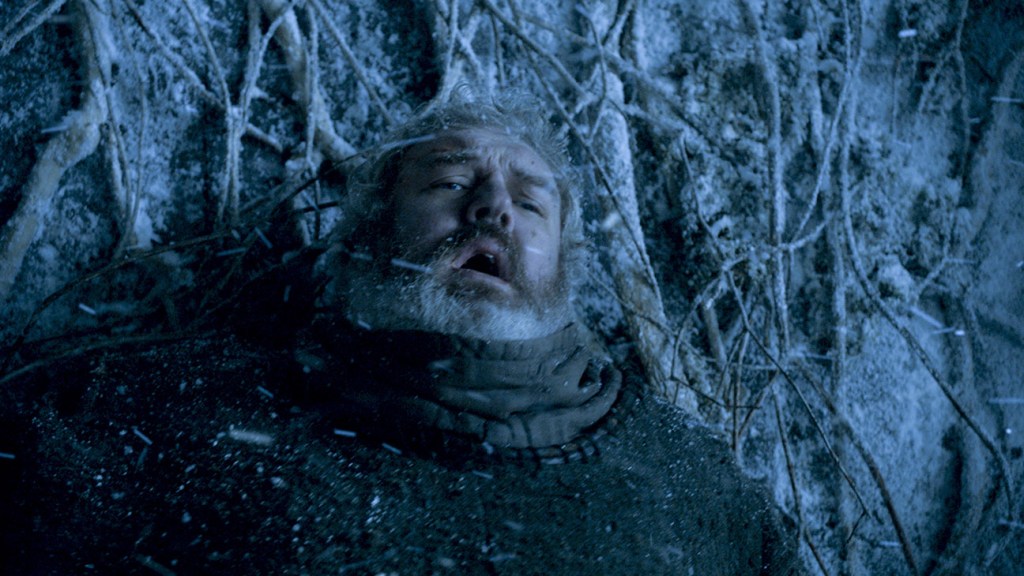 Emphasis on probably. After all, this is Westworld; very little is off the table, even a surprise Game of Thrones connection. (Don’t forget, the original feature film included a park called Medieval World. Westeros World is more realistic than you might think!)

What are your theories about what “The Door” means for season two? Sound off in the comments below, and keep checking THR.com/Westworld for more coverage.