For some fans, it’s not enough that Westworld deals in the tension between human sentience and artificial intelligence. There are also questions about time — not of the traveling variety, necessarily, but still an idea that’s bound to cause a glitch or two.

The second episode of HBO’s alluring new series introduced William (Jimmi Simpson) and Logan (Ben Barnes), two human guests with very different ideas about how to approach Westworld. William is a pure newcomer, arriving in Sweetwater for the very first time and witnessing all the action with virgin eyes and a white hat. But Logan? He’s black hat all the way. He’s paying $40K per day to indulge his wildest fantasies, shooting and sleeping with anyone and anything he pleases.

“This place is the answer to that question you’ve been asking yourself: who you really are,” Logan tells William as they roll into Sweetwater. “And I can’t f—king wait to meet that guy.”

So, what will that guy look like, whenever William arrives at his true form? It’s anybody’s guess, but some people think we’ve already met that guy… 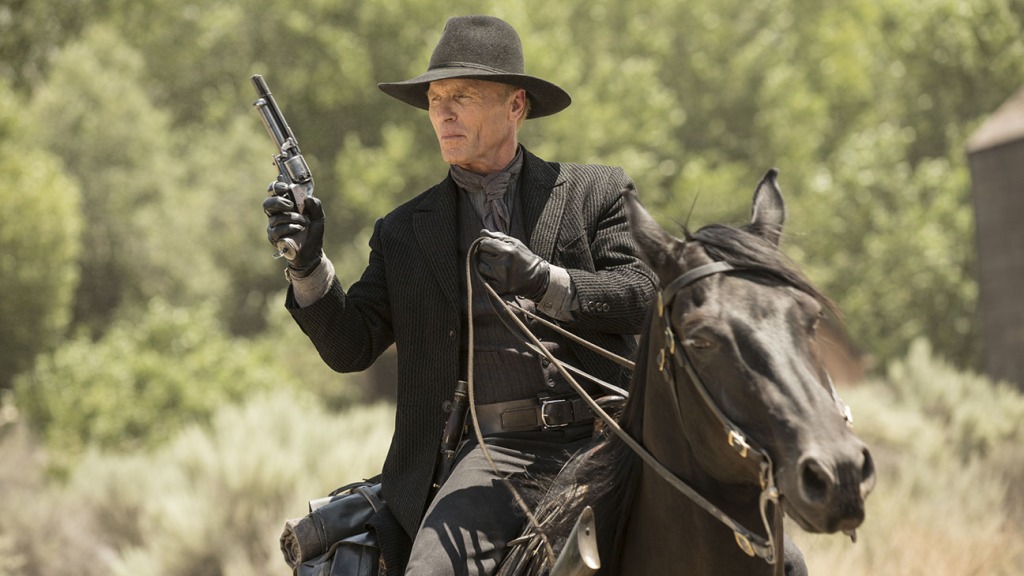 …the Man in Black, played by Ed Harris.

It’s one of the wildest Westworld theories out there right now: William and the Man in Black are the same person. How’s that possible? Is William a secret host, unaware of his true form, only to learn the secret whenever he encounters his older self? That’s a high-concept possibility, but there’s perhaps a simpler answer, even if it requires some mental gymnastics to keep stories straight.

According to the theory, William and Logan’s story is playing out in the past, while the Man in Black’s story is playing out in the show’s present timeline. In the second episode, William and Logan are not seen interacting with any of the hosts from the premiere, save for two: Clementine (Angela Sarafyan) and Dolores (Evan Rachel Wood). Dolores is the oldest host in Westworld, which would explain her appearance in the past. As for Clementine, the book is wide open on her; she could be any age, for all we know. There’s also the matter of William and Logan’s arrival in Sweetwater. Normally, Teddy Flood (James Marsden) arrives in town by train, but he was conspicuously absent from Logan and William’s train car. Is that because Teddy doesn’t exist yet or at least does not yet operate on this familiar loop? In terms of performance, both Simpson and Harris are playing their characters with stiff lips — and not just in the sense of boasting true grit. There’s literal stiffness to their mouths, which could be nothing or could be a mutual acting choice if they’re playing different versions of the same character.

It’s far from a closed case, the way that fans cracked a certain USA Network show’s twist very early on a few months ago. But it’s an intriguing possibility, one that viewers would be wise to start tracking as Westworld continues. Keep an eye on William and the Man in Black. Are they in the same scenes together? Is William interacting with versions of characters that couldn’t exist in the past or interacting with characters we know are operating in the show’s version of the present? It’s right there in the opening line of the show: “Have you ever questioned the nature of your reality?” It’s worth questioning William’s reality right now, ahead of the show’s third episode.

What if the theory pans out and William and the Man in Black are indeed the same man? Then William’s journey from literal white hat to literal black hat should be a turbulent one to watch.