Fans of HBO’s new sci-fi Western experiment Westworld were treated to something old and something new Sunday at the show’s New York Comic Con panel.

The gathering kicked off with a screening of the new series’ second episode, “Chestnut,” which HBO released on its digital platforms Friday ahead of the normal Sunday airtime, as a means to sidestep the presidential debate. Viewers who already watched that episode nevertheless put their eyes on something new: a massive trailer previewing the season ahead, featuring cannibalism, robots removing their own faces and experimenting with their circuitry, some of the hosts violently rebelling against humans (watch out for Maeve) and Ed Harris’ Man in Black declaring himself the “proper villain” of Westworld.

Evan Rachel Wood on 'Westworld' Violence Against Women: "Wait for the Context"

The panel previewed the show even further through a conversation with co-creators and showrunners Jonathan Nolan and Lisa Joy and castmembers Thandie Newton, Jeffrey Wright, Jimmi Simpson and Ben Barnes. Nolan and Joy kicked things off by explaining their inspirations from the 1973 Michael Crichton movie and that they were most excited to explore the idea of life from the perspective of a new emerging consciousness.

The episode that screened heavily features Newton’s character Maeve in a couple of incredibly intense sequences, with Maeve starting the process of learning the truth about her existence and world.

“What’s fascinating is pulling back these layers that could be going on and on forever,” said Newton. “As an actor, the challenges of playing this role are immense. But it’s also the most satisfying, the most gratifying thing.

“There are subtle changes in what we’re doing,” she continued, speaking to playing multiple characters within the same character. “We get to show our range as actors and how much we can respond to different direction. Seeing it onscreen, building a jigsaw which the audience has witnessed … and then maybe we’re going to see what happens when these hosts piece together these nightmares they’re having, which feel like memories. They’re so immersive, these dreams they have. Once they have a level of freedom … it’s terrifying, but also incredibly liberating. The unknown is a very liberating place. Being able to not only play the robots, but also the wild and feral craziness of becoming conscious.”

The relationship between Wright’s character, scientist Bernard Lowe, and Anthony Hopkins’ Robert Ford, the visionary responsible for the park, was explored next.

“He deeply respects Ford,” Wright said of his character. “He’s kind of the Walt Disney-Colonel Kurtz grandfather of the park and of the science. At the same time, Bernard is a little more … maybe because of certain things going on in his world, he’s a bit more sensitive and empathetic toward the hosts, and curious about the possibilities the science represents in terms of sentience. Ford sees them as tools and that’s it. We send them out, bring them back, the guests use them for their indulgence, and that’s it. Ford is obviously a very isolated guy, maybe a bit misanthropic. His relationship to these things lacks the elements of empathy and sensitivity that Bernard brings to it. There’s a tension there we’ll explore as we go forward.”

Wright added about Bernard’s emotional attachment to the hosts: “He may be looking for something. We’ve seen his son, and we understand he means something to him. There may be an attempt for him to find humanity where there may be a void. That’s why Ford tends to caution him. He realizes that there are dangers in going too far. Perhaps that’s why he’s shielded himself. He realizes this is an illusion. Stay within the bounds of the video game. Don’t do more than that, and you’ll be okay.” 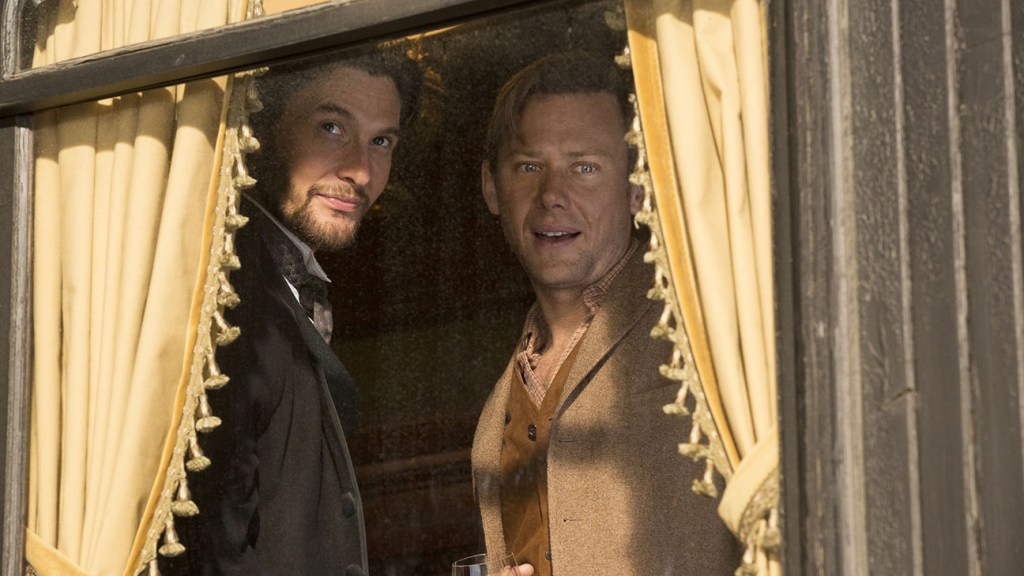 The episode introduces two newcomers to Westworld: William (Simpson) and Logan (Barnes). Barnes teased that the season will reveal his character’s darker impulses: “It’s Shakespeare. It holds a mirror up to humanity. It takes these perfect creatures to show you just how flawed you are. This is the safest environment to embrace those flaws and turn them up to 11 and see what you’re made of — and in this case, push and prod William to see what he’s made of. He’s on a bit of a Grand Theft Auto mission of indulgence. He wants to see how naughty he can get.”

Nolan said that he and Joy played video games as research for the show, which he thinks in its own way is a bigger industry than film and television.

“How happy was my husband to say, ‘Honey, it’s research, you have to play Red Dead Redemption with me,'” Joy joked about working with Nolan.

“I’m happy to report that my wife is the most boring Grand Theft Auto player ever,” Nolan sniped back. He added that he was interested in non-playable characters, and spoke with the makers of BioShock about all the work that was put into these figures that typically goes largely ignored by players.

Nolan also said Person of Interest, a show that leaned heavily on artificial intelligence, helped inform the work on Westworld: “It feels like I’ve found my subject, the thing that I’m most interested in. The concept of Person of Interest, distributed A.I., will appear first. But anthropomorphic A.I., artificial intelligence hobbled to have to look and act like us, was fascinating to me.”

On the subject of the show’s use of music, Nolan liked the idea of a player piano as the first version of the hosts: a machine created to evoke human emotion. “It was a great excuse to use contemporary music on our show,” he said. “It’s very powerful. Everything comes to a song with a preexisting relationship. It allows you to short-hand an idea. And it’s here to stress the idea that this is not a Western. It takes place somewhere else.”

Digging deeper into some possible speculation, there’s a moment in the episode where Dolores (Evan Rachel Wood) says what might be a trigger to Maeve: “These violent delights will have violent ends.” Nolan and Joy sidestepped the question of that phrase’s importance, but Joy insisted that the phrase will certainly emerge again moving forward.

“They have such a brilliant and articulate story,” Simpson said of the showrunners‘ secrecy on-set. “As the performers, you only know what they let you know. It’s only enough to play the scene with the most clarity.”

Wright gave full credit for the show’s success to Nolan and Joy’s ability to thread “the tapestry of our characters and stories to mathematical precision. We are partying our asses off with this show. It’s the most gratifying thing as an actor to find words that are so satisfying and beautiful and clever.”