With those two words, Westworld viewers finally came face to face with Emily (Katja Herbers), daughter of the Man in Black (Ed Harris). As of “Vanishing Point,” two other, related words come to mind: “Bye, Dad.”

Season two’s penultimate episode aired on Father’s Day, which turned out to be dark timing indeed as the Man in Black, fully in the mouth of madness on his search for the Door, killed his daughter in cold blood. Convinced she was a host, the Man in Black gunned down Emily and a small army of security operatives, refusing to back away from the quest laid forth by Robert Ford (Anthony Hopkins). It’s only when he sees his profile key clutched in Emily’s cold, dead hand that the man occasionally known as William seems to realize what he’s just done — and even then, it’s not clear that he fully grasps the situation.

What’s next for the Man in Black as he continues trekking toward his goal? The answer awaits in the season finale, “The Passenger.” For now, there’s still the matter of saying goodbye to the tragically fated Emily, played by The Leftovers and Manhattan veteran Herbers. Read on for her take on how the death of Emily came together, and why she feels it’s a fitting end for the character. 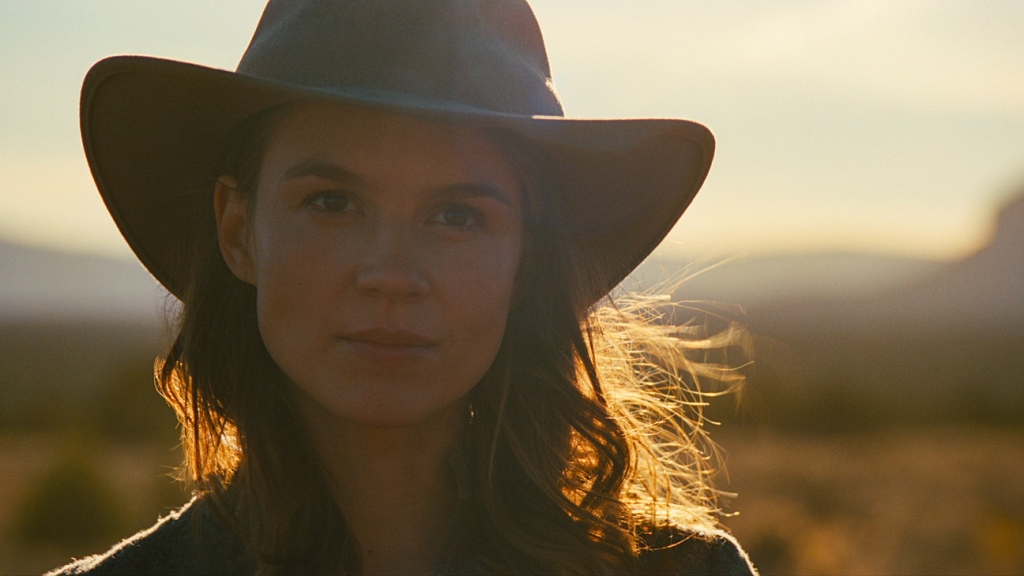 What was your reaction when you learned about Emily’s fate?

I was pretty heartbroken. But I found it to be an amazing arc to have played, and an amazing one for Ed Harris… for the Man in Black to kill his actual daughter? I don’t think it gets any bigger than that. I’m very excited for what it means for him, and also for my arc, actually. I think it’s pretty perfect. I’m just heartbroken. I’ve loved working on the show. I loved my character. I would have liked to be more involved, but…

But with the way the show plays with time, there’s always a chance we could see Emily again, right?

I mean, it’s possible. It’s possible. I guess they copied my person and my data [through William’s project], right? So I guess I’m somewhere. … Everything’s possible.

Westworld has such a nebulous relationship with death, so it’s always worth approaching these things with some caution.

That’s what I’m holding on to. (Laughs.)

Were you told early on about Emily’s death or was it something you learned when you read the script?

I knew that it was going to happen around episode six. I always knew my [character’s] goal was that she had felt so incredibly guilty about her mom, and now she’s read his profile. So I knew Emily wanted to go to Westworld, get her dad out of Westworld and lock him up — to get him certified as insane. I knew that’s why I was there all along. I always knew that trying to make peace with him was a tactic. I interpreted it as her having a very clear idea. She knows exactly who he is. She needs to get him out of the park, so she tries different angles. I don’t think there could be a bigger moment for the Man in Black than to kill his own daughter. I’m really excited about the storytelling.

It was pretty shocking!

Did you see it coming?

No! My jaw was on the ground, the same as Emily after her father guns down the soldiers. That’s an incredible expression of shock on your part.

She’s read his profile, but she didn’t think he was that insane. It’s just another level. I don’t think she can grasp it. That’s how I played it. I didn’t think he was going to kill me. I couldn’t get my head around what had just happened. That’s what I tried to play.

'Westworld' Bloodbath Sets the Stage For a Deadly Finale

Emily is clearly capable and can handle herself in the park. It’s hard to imagine she was going to reach for something, if it was ever a consideration that she would spur her dad into pulling the trigger…

Right. I think maybe she needed to take it a bit more seriously that he kept addressing her as “Ford.” I didn’t take it so seriously. I’m just thinking, “Wow, you are out of your mind. We need to get you out of the park.” I never thought through what it could have actually meant — otherwise I never would have reached behind my back. (Laughs.)

The buildup to the death is very intense. The power dynamics ebb and flow as Emily and her father relive the most painful moment of their life, and then he starts dismissing her as “Ford,” and she reveals her true motivation. What was it like, playing that out?

It’s really so wonderful getting to act with Ed Harris. I would recommend it to anyone. (Laughs.) If you ever get the chance? Do it, just go in there and act! Everybody knows he’s a good actor. Look out for his stuff; he’s good. We really didn’t have much time to map it out. We had to shoot all of that in one day, so it was a lot. We figured it out as we went along. Ed was always so present. I had to do a lot of talking, and he had to do a lot of listening.

There’s one moment where you grab his face as he’s laughing. Was that spontaneous or rehearsed?

How about shooting the actual shooting?

I’m so happy I only had to do it once. That was one of the most painful things I ever experienced, and I’ve had surgery on my knee with bad [anesthesia]. They put on all of these squibs, all in my jacket. Maybe 40 or something. They told me it really wasn’t going to hurt… but it hurt! (Laughs.) It was a lot. I was a little disappointed they didn’t use the slow-motion take. There’s a slow-mo version of all the blood squirting out of me. Maybe that’ll be on a DVD someday, for the sick people who want to see that.

It’s a great episode for you beyond what’s happening in the park, as we get to see Emily and her father’s relationship in the outside world.

I really loved that we got to do that, and that we got to see the Man in Black in his home life. I loved that we could see this loving relationship between them, to counter what we see in the park. I think that makes for so much of her anger, that she never saw that he was gaslighting her mom all along, and that she took sides with her dad, when she should have been helping her mom. I think she experiences a lot of guilt. I was really happy that I got to show some of that dynamic. I really do think you see a loving relationship between these two people. You also see the enormous wealth, just how insanely rich these people are and the power that surrounds this family.

It really does add to the level of tragedy surrounding Emily’s death at her father’s hands, when you see them in the flashbacks, and how close they were.

Absolutely. That’s what made me so excited about getting to show that side. I can imagine if one person in your family is an addict — luckily, I don’t have that — but you really might bond in this different way, because you basically have a child who needs your care. We have a child, and she’s my mother, and she needs care. It made for an even stronger bond between them… but it turns out that her problems were his doing.

What did you make of that Westworld shocker? Sound off in the comments below and keep checking THR.com/Westworld for more coverage.