[Warning: This story contains spoilers for the second episode of HBO’s Westworld.]

For a show that’s set in a world where humans are encouraged to live out their wildest Wild West dreams, Westworld certainly knows how to craft a nightmare or two.

Take the harrowing sequence toward the end of “Chestnut,” the HBO science-fiction drama’s second episode. After suffering a series of perceived malfunctions, including recurring visions of a previous life she does not fully comprehend, Sweetwater’s main madame Maeve Millay (Thandie Newton) wakes up on an operating table, right in the middle of a surgical procedure.

“Isn’t that just one of the worst things imaginable?” Newton tells The Hollywood Reporter, reflecting on the scene. “It’s right up there with waking up in a coffin underground. It’s one of those hideous things you hope never happens to you: mid-operation, you wake up. Her waking up was a result of the sloppiness of the experts, when they’re not dealing with actual human beings.”

Evan Rachel Wood on 'Westworld' Violence Against Women: "Wait for the Context"

Newton compares the scene to the death penalty — specifically, real stories of executed prisoners she’s been reading about in Just Mercy: A Story of Justice and Redemption, a New York Times best-selling novel about the United States prison system, written by Bryan Stevenson. She says: “I’ve read quite a lot about the death penalty and how barbaric it is. Every time I read about someone who has been executed, it’s a botched execution, and it happens again and again. It’s supposed to be a humane way of dying. That’s the whole point — it’s supposed to be humane. One guy that I’m reading about in Bryan’s book, it took him almost an hour to die. I feel like the word ‘humane’ needs to be re-thought quite seriously. If that’s supposed to be our standard for goodness and ethics, we need to change it.”

As Maeve awakens in this strange new world, she hears her surgeons talking shop in vulgar terms. (“No wonder we have a fly problem,” one of the operators says as he cleans out Maeve’s abdomen.) Newton feels the surgeon’s casual nature reflects the show’s greater themes of humanity’s increasing desensitization to violence, vulgarity and other disturbing forms of stimuli … and, really, all stimuli in general.

“We have an ability as humans to turn our empathy on and off,” she says. “We are fed so much visual stimuli, and it’s at the point where we have to be told if it’s real or not. We can find ourselves watching a horrific execution on television, and you might think that it’s fiction, and as a result, you won’t feel anything. But if you’re told it’s real, that it’s actually a snuff thing you just saw, then what? You feel delayed concern? We have been programmed, and we are being currently programmed, to turn off our sensitivity. Sensitivity is one of the things that keeps us alive. Our sensitivity to noise, our sensitivity to danger … we’re turning it off. Let’s hope we never find ourselves in a situation where we have to be all eyes ears and senses alerted, because there’s something f—ked up going on and we need to look after ourselves.” 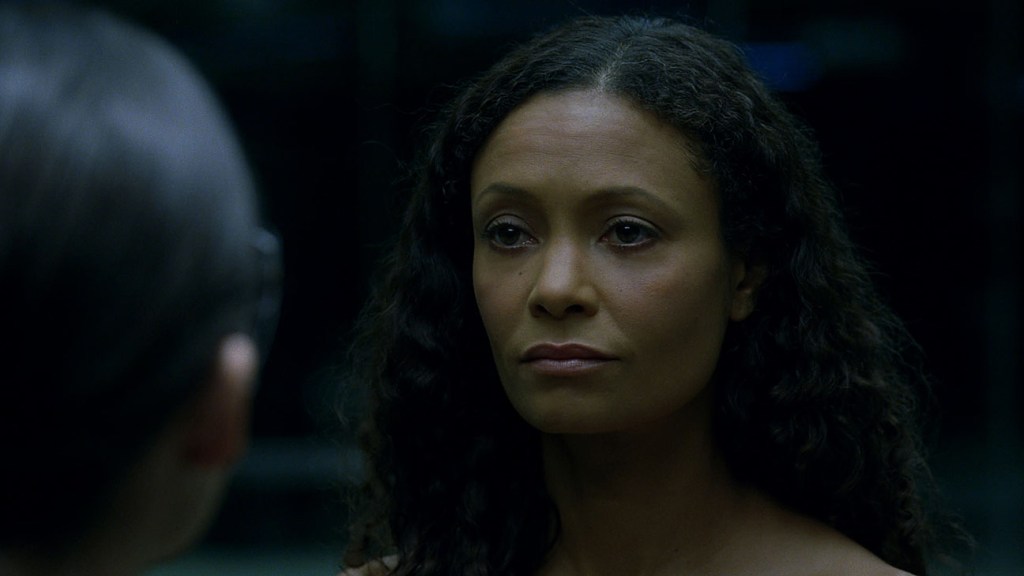 Newton’s view of the scene, which sees Maeve wandering through an impromptu behind-the-scenes tour of how the Westworld sausage gets made, falls in line with how showrunners Jonathan Nolan and Lisa Joy view the HBO show’s use of violence. According to Nolan: “The sort of disposable and repeatable nature of the violence in our show, in which hosts can be brutalized, victimized, killed, then reset and put back into their world, it presents two ideas. One: Wow, that’s f—ked up, and I hope they get a chance to escape, or that the guests at least get some comeuppance. But also, there’s a strange kind of strength in that. There’s something that [one of the robots] says in a future episode: ‘I’ve died a million times. I’m f—ing great at it. How many times have you died?’ That question, to me, the idea that the hosts are simultaneously the perpetual victims of this place but also that it gives them a certain strength and marks them as qualitatively different than us, is very exciting on a character level.”

'Westworld' Shows Off "Something Quite Original," Previews New Season at NYCC

“When you realize that the people involved in the show care a lot, that they really care about the robots and the characters and humanity, that’s why they’re revealing this stuff,” says Newton, echoing her support for Nolan and Joy’s vision of Westworld‘s violent world and how it relates to our own. “You could be on the dark net for two minutes and you would see shit going down that makes Westworld look like a tea party with Clifford the big red dog. … Do you know what happens in the world? Do you understand what has to happen for you to cue up your iPhone f—ing 7? Do you understand the cost to other people in the world? You think these robots are being treated badly? Look what’s happening in the world.”

Newton boils her views down even further, riffing on the very first line of the series: “Question the nature of your f—ing reality — because your reality is tied to every other human being’s reality.”

Westworld airs Sundays at 9 p.m. on HBO. What did you think of episode two?