Continue to The Hollywood Reporter SKIP AD
You will be redirected back to your article in seconds
Skip to main content
May 28, 2018 10:15am

“We each deserve to choose our fate. Even if that fate is death.”

Wise words indeed, as Thandie Newton’s Maeve not only articulates her character’s current outlook on the hosts’ individual journeys toward consciousness, but quite possibly the show’s own philosophy on the subject as well. In the riveting “Phase Space,” the sixth hour of the HBO drama’s second season, the book on Shogun World closes, ending a bold new chapter in the Maeve storyline and paving the way for what’s coming next.

At the onset of her story in the episode, viewers watched as Maeve surveyed the carnage of an unseen samurai battle, bloodied blade in hand, dozens upon dozens of corpses in her field of vision. Once again looked upon as a “witch,” Maeve stands idly by while Musashi (Hiroyuki Sanada) takes on his old rival in single combat. Later, Maeve, Musashi, Akane (Rinko Kikuchi) and the rest arrive at Snow Lake, where Sakura (Kiki Sukezane) is laid to rest — the most important part of her, at least. The late Sakura’s hometown becomes the final parting of ways between Maeve’s group and Akane’s group, an end to the show’s time in Shogun World, at least for now.

What did the show gain from Maeve’s Shogun World sojourn, exactly? Quite a lot, according to Newton, who tells The Hollywood Reporter that her character’s arc in the faraway park speaks not only to the story of Maeve, but the story of the hosts at large: “There’s a parallel experience between what she went through and what’s been going on with these other AIs. There’s a betrayal, that not only is her story her story, but countless others in the park.

“We’re seeing how these characters are also breaking free from their loops,” Newton continues, speaking about the Shogun World hosts. “Movements grow because when one person speaks the truth, it then inspires others to come forward. In some ways, I feel like this is another wave to the feeling of revolution that lies within Maeve, seeing others who have been similarly abused and lied to, and are similarly desperate to break out of the trauma they’re experiencing. It differs to Maeve’s storyline, without a doubt, because in Shogun World, with Akane, it’s [a parallel] with Clementine. She’s not dreaming about the daughter she has, necessarily — though maybe she is — but it empowers Maeve to go forward and conquer in her own way. That’s the big impact on Maeve: It’s yet more reason to liberate not just her daughter, but others who have been similarly lied to.” 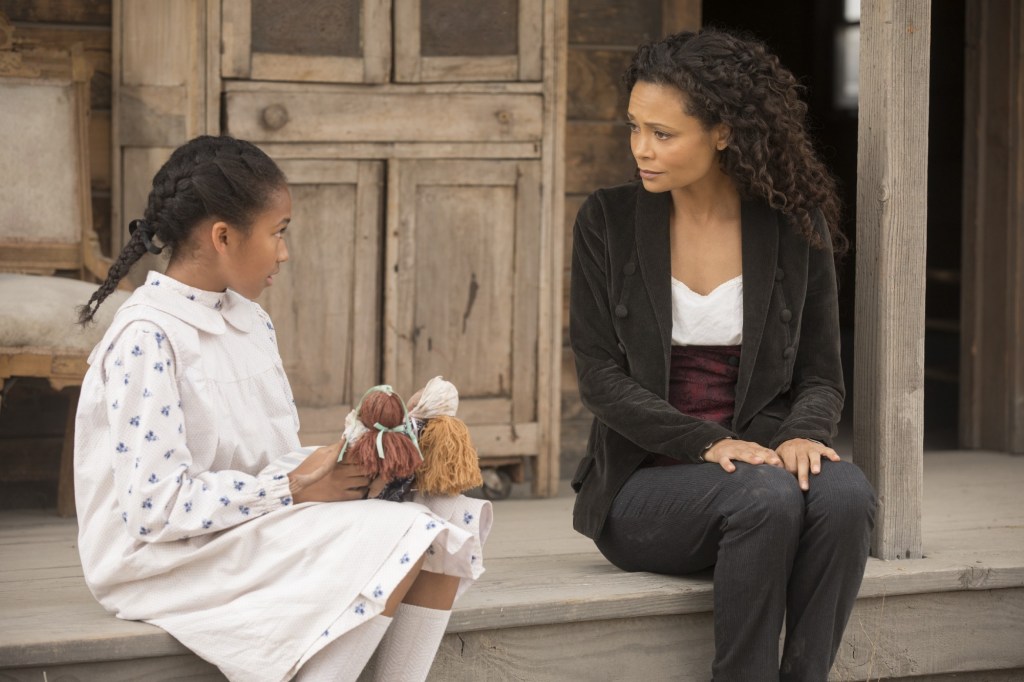 Upon leaving Shogun World, Maeve reunites with the daughter she’s sought all season long — only to find that her daughter has a new mother, much in the same way Clementine (Angela Sarafyan) was replaced by a new host in the first season. The reveal doesn’t stop Maeve from acting to protect the young host she views as her daughter when members of Ghost Nation ride upon the homestead, ready to enact the nightmare scenario Maeve has suffered through so many times already. Running away with her “child,” Maeve encounters Akecheta (Zahn McClarnon) and manages to speak in the host’s native Lakota (another impressive showing from Newton, who previously told THR about what was involved in learning to speak Japanese).

Why didn’t Maeve simply stop the Ghost Nation warriors with her “new voice,” which doesn’t require much of a voice at all? It’s a question for another time, as Maeve has more pressing matters on her plate — not only rescuing her “daughter,” but coming to grips with her own role in liberating the rest of her species.

“At the beginning of the season, [Maeve] doesn’t give a shit about liberating other robots,” says Newton. “[Shogun World] definitely helps shift that perspective. You have [Evan Rachel Wood’s] character, Dolores, whose only interest in other robots is to serve her purpose. She’s not interested in liberating others; she’s only interested in liberating others if they will do what she believes is right. Maeve isn’t into that. She’s into self-realization and self-liberation, and if that happens to chime with others? Great. But hers is definitely more of the hippy strand.”

The hippy strand continues in the next episode of Westworld, “Les Ecorches,” directed by Nicole Kassell. Let us know what you thought of this week’s installment in the comments below, and keep checking THR.com/Westworld for more.

How 'Westworld' Paved the Way for That "Phase Space" Shocker