The creative minds behind Westworld are keeping their thoughts to themselves, at least as far as tipping off any secrets about what’s coming up in the new season of the sci-fi series.

It’s safe to say Dolores (Evan Rachel Wood), Maeve (Thandie Newton) and the other hosts will greatly advance their journeys of consciousness and self-discovery, now that Robert Ford (Anthony Hopkins) is dead and the park has fallen into disarray. The story will expand to the point that at least one other park will come into focus: Shogun World, first teased in the season one finale. Flashbacks will exist, affording the younger version of William (Jimmi Simpson) and Logan (Ben Barnes) another story in this universe, if not another trip to the park. Beyond that? Lips are sealed.

That is except for one very intriguing detail: “The Door.” It’s the secret name of the show’s second season, as revealed by creators Jonathan Nolan and Lisa Joy. Indeed, the pair identified “The Maze” as the unofficial title for the first season. “Everything in the park is code,” someone utters early on in the season two premiere, and those words of wisdom extend to the meta narrative surrounding the show’s creation, secret season titles included.

Welcome to 'Westworld': Inside the HBO Drama's Season 2 Hollywood Premiere

In the weeks ahead, Westworld fans who like to decipher the show’s clues will be looking for answers about the true nature of “The Door,” and how it will be literally and figuratively rendered. Certainly, the new season will provide countless hints along the way. For now, let’s engage in a different but related exercise: combing through the archives of season one for clues about future season titles.

For instance, we first hear the phrase “the door” all the way back in the second episode, “Chestnut,” as William arrives at the park for the first time. After selecting a white hat, William is sent off to discover Westworld, walking through a door that leads him into the train car, which leads right into the town of Sweetwater. Whether or not this is the same door at the heart of season two, it’s at least an early instance of the word that will come to define the next batch of Westworld episodes.

Are other words with looming importance buried deep within the sprawling first season? Maybe, maybe not. With the premiere itself looming but not yet available for wide consumption, there’s no reason not to spend some time speculating away. Here are some buzzwords from the first season that could come to define the series as it grows and expands: 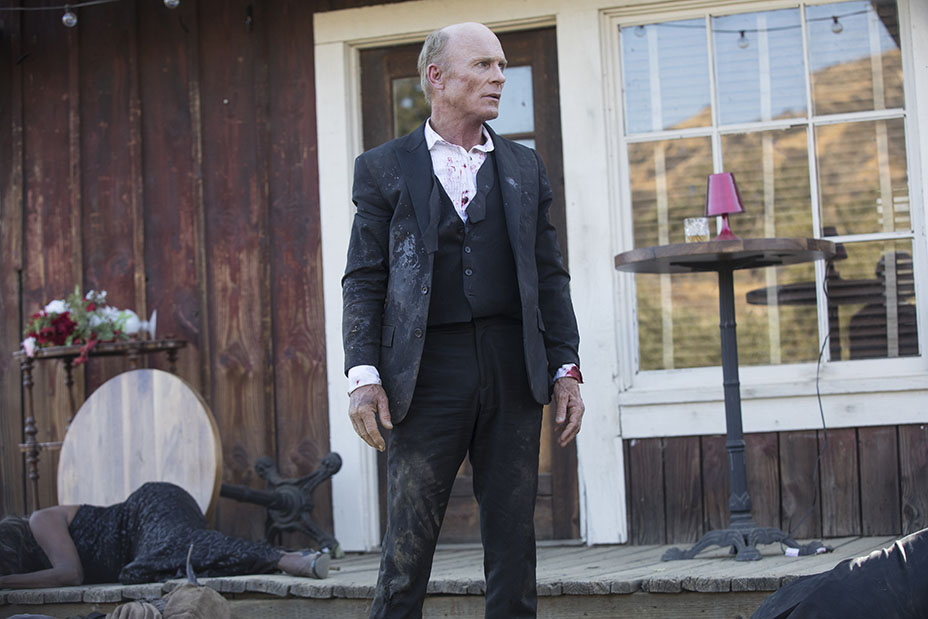 “Some people choose to see the ugliness in this world. The disarray.” It’s among the first lines uttered in Westworld, as Dolores guides us through her programmed view of the world around her. She chooses to see the beauty; at least, it’s what she once chose. The woman seen at the end of season one likely sees the world differently now. Should the park descend into further chaos and delve deeper into the dark depths of human nature, “The Disarray” could speak rather well to a season of choice.

Within the aforementioned quote, Dolores talks about “this world.” Elsewhere in season one, she and Teddy (James Marsden) talk about the greater world and their shared desire to run away together “some day.” If the hosts successfully conquer the parks in season two, it’s reasonable to guess that they will turn their gaze to the world beyond their own. A season of Westworld that exists largely outside of the park — or a season focused on the hosts escaping the park for the wider world — could be defined under such a wide-sweeping word.

'Westworld': Where Everyone Left Off and What's Next in Season 2

“Evolution forged the entirety of sentient life on this planet using only one tool: the mistake.” Wise words from the late Robert Ford, uttered to his friend and colleague (and secret creation) Bernard (Jeffrey Wright) early on in season one. It seems like a mission statement for the series: Transformation and advancement are made possible by making mistakes. A season falling under this subtitle could focus on the human faces of Westworld coming to genuine grips with the mistakes they have made in their treatment of the hosts; likewise, some of the hosts might even ponder their own mistakes, should someone like Dolores dive too deep into her Wyatt-inspired notions of vengeance against mankind.

Ford and Arnold developed the hosts by channeling the Julian Jaynes theory of the “Bicameral Mind,” which posits consciousness as a pyramid — which feels like an abundantly rich name for a season, given what it could entail. It speaks toward consciousness, of course, right at the core of the show’s thematic territory. It also speaks to a physical object and place, much like “The Maze” and “The Door.” It also could point us in the direction of another park. “Egyptian World,” anyone?

“An old friend once told me something that gave me great comfort. He said Mozart, Beethoven and Chopin never died. They simply became music.” These are among Ford’s last words, right before he’s shot in the head by Dolores in front of a packed crowd of Delos board members. Music has a central role on Westworld, thanks to the powerful and experimental score from Ramin Djawadi. As of the show’s most recent episode, “The Music” takes on even more meaning, as a lyrical analog for “death.” When the series’ final season inevitably comes — hopefully not for a long time — “The Music” would be a more than apt way to play out the final notes of Westworld.

What are some of your predictions for future season names? Sound off in the comments below and keep checking THR.com/Westworld for more coverage all season long.