“You only live as long as the last person who remembers you.”

These are the wise words of Akecheta, “the first of us,” as he’s described by a fellow member of the Ghost Nation tribe all the way back in “The Riddle of the Sphinx.” The fourth episode of season two features Akecheta’s second full appearance in Westworld, having debuted two episodes earlier in “Reunion,” albeit under very different circumstances: clad in business attire, face to face with Ben Barnes’ Logan Delos, doing his level best to convince the narcissistic rich kid into investing in the park’s future.

Fast-forward a few weeks later, and Akecheta once again stands front and center in Westworld, even sharing screen time with Logan again. This time, the circumstances could not be more different, as the painted Ghost Nation warrior stands over a physically and emotionally naked Logan. Both men wear their souls on their sleeve in the moment, and it’s Akecheta who gets the opportunity to express his inner self over the ensuing hour: “Kiksuya,” written by Carly Wray and Dan Deitz, easily the most emotionally and thematically rich episode of the series’ 18 installments.

Wray, Deitz, director Uta Briesewitz and showrunners Jonathan Nolan (who goes by “Jonah”) and Lisa Joy are among the many individuals responsible for bringing “Kiksuya” to life, though it’s the central actor who is likely to be best and most immediately remembered from the outing: Zahn McClarnon, late of FX’s Fargo and Netflix’s Longmire, the performer tasked with bringing Akecheta to life. Speaking with The Hollywood Reporter, McClarnon opened up about how he first became aware of his central role in the episode specifically and the season at large, what to expect as Akecheta’s journey continues moving forward, and more.

'Westworld': A Nightmare Becomes Something Beautiful in "Kiksuya"

How did you learn about “Kiksuya” and your central role in the episode? Did you sign on for Westworld knowing you would take center stage later in the season?

Jonah and Lisa did explain it to me when I first started. They said they were going to dedicate a full episode to Ghost Nation. I wasn’t sure they would dedicate it quite so much to my character at the time. They did inform me they were going to explore Ghost Nation and give the audience an idea of where they came from and their whole storyline. It was pointed out to me at the beginning.

What was it about their pitch, and about Westworld overall, that drew you to the story?

Jonah and Lisa’s visionary and imaginative storytelling. I was a fan of the first season of the show. It’s top-notch storytelling. I don’t see a lot of television out there that compels me to actually want to be in it. It’s hard to turn down job offers, obviously, but when something like this comes along, it’s just a privilege to be a part of it. Everyone on the team is exploring these philosophical ideas about consciousness and identity and free will. I find it to be so compelling. It’s the kind of television that makes you sit down and need to think about it. It’s not the stereotypical, cliched detective story. Anything different from normal television is something I want to be a part of. It’s something that was very easy to say yes to.

Wray co-wrote this episode, and also co-wrote the second episode of the season, which is the first appearance of Akecheta, albeit in a very different circumstance. She said even then, you were greatly interested in getting under the hood of Akecheta, learning who he was internally. What were you wondering about the man?

Watching the first season and watching how well-written all the characters on Westworld are, I was very interested to see where they were heading with the Akecheta character and Ghost Nation, and how they were going to explore that. It’s a bit unusual to most shows, though. You walk in, and there isn’t a lot of backstory [available], especially in episode two. In the process of acting, you want to grab on to anything you can in order to express your character. It’s a little bit different and unique with the Westworld process; it’s a bit of a blind- faith process. They give you enough to hit your mark and have an idea of what this character is about, trying to stay as honest as possible with the information you have received. It’s a little different, a very unique style of getting information. You don’t have much on the page. It was a different process to navigate, but a good process. It brings different traits to your character, because you only have exactly what you need. 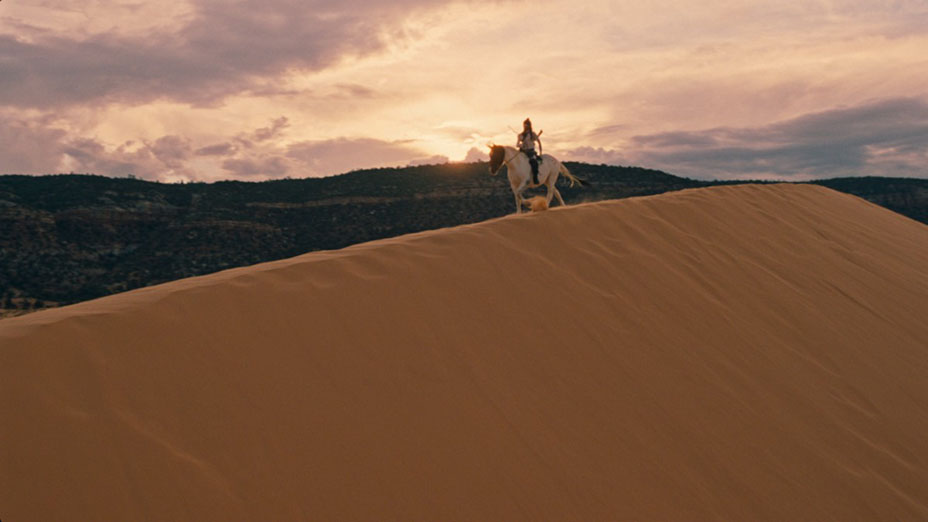 Speaking of “as honest as possible,” Wray mentioned she and co-writer Deitz wanted to make sure this episode was culturally authentic and responsible, and that you were involved on that front. Can you speak to that experience?

First of all, Ghost Nation is a fictionalized tribe, coming from the mind of Dr. Ford. It’s more of an idea of what the creator of these robots and AIs thinks a tribe would be, so it’s not actually based on an actual tribe, even though we used the Lakota language. I’m very familiar with that culture, because I am a Lakota and a Standing Rock Sioux. I was able to bring my culture, growing up on and off a reservation and surrounding reservations, spending most of my life around Indian people. I was able to bring those cultural aspects and my experience to the episode. But it’s a fictionalized tribe, so there’s a bit of freedom because it comes from someone who created Westworld and someone who thinks of what a tribe would be. So you can almost get away with as much as you want. (Laughs.)

We brought on Larry Pouier as a Lakota adviser, and we had Cordelia White Elk, who did a phenomenal job with the language. I’m not fluent in the language, but I grew up around it. My mom is halfway fluent and I was able to contact her to see if things sounded right. They were very specific about all of that stuff, Carly and Jonah and Lisa. They wanted to get the language especially right. They were very open to Larry’s points of view and my points of view. I find that’s the case nowadays in most productions. They want to get things right, especially when portraying a specific tribe. It’s not like the old days, when they’re making stuff up and casting white people as natives. They’re bringing real natives in for native parts. It’s a beautiful thing. We’ve progressed quite a bit.

How intense was the makeup process?

That was probably one of the most difficult parts of the job, to be honest with you. It was about a two-and-a-half-hour process. It’s a mixture of glue and paint, so it’s extremely uncomfortable. But it does get you into that head space that you’re outside and in the sun with this paint on you that’s cracking, and they need to touch you up every five minutes because there’s paint cracking on your face. It’s probably the most difficult part of the job, getting that done every morning. I was very happy on the mornings I didn’t have to wear the paint. (Laughs.) Getting the stuff off was extremely hard. I would wake up in the morning and still have paint in my ears. It was pretty tedious. But I kept thinking about what someone on The Hobbit or Star Trek or something like that goes through, with four to six hours of prosthetics. I had it pretty easy; all they had to do was slap it on.

Week in 'Westworld': What's Ahead in the Ghost Nation Origin Story

There are so many beautiful shots of the landscapes throughout the episode, and there’s a recurring image of Akecheta on his horse, looking out at the dunes. One can imagine what’s on his mind in those moments; what was on yours?

First off, the locations really were absolutely beautiful. Being in that setting helps an actor out quite a bit, just looking out at the pristine beauty of Utah and where we were. One of the main themes I tried to keep throughout my performance and my thought process was the awakening, and the existential crisis Akecheta was going through and trying to understand the loops he’s going through. There’s a lot of loss and love throughout the episode. That was pretty easy for me to get to, especially with playing opposite a beautiful actress like Julia Jones (Kohana). There’s a drive in trying to reclaim what was stolen from him and his people. There’s one scene where he starts trying to override his programming. It’s a scene where he’s about to scalp the miner. You see those locations, and it was very easy for me to look around and get into that character.

Moving out of “Kiksuya,” Akecheta and Ghost Nation have arrived in a major way. What’s next?

Hm. How do I answer that one without giving anything away? (Laughs.) Akecheta is on a journey. He’s woke. He’s looking for that “door.” That’s what you’re going to see in these next few episodes.

What are your expectations for Ghost Nation moving forward? Sound off in the comments below and keep checking THR.com/Westworld for more.