On FX’s What We Do in the Shadows, created by Jemaine Clement (based on the 2014 film he wrote and directed with Taika Waititi), three vampires who once set out to conquer America have found themselves living lazy and beleaguered lives in modern-day Staten Island. It’s something like Three’s Company by way of Dark Shadows: While werewolves, ghosts, witches and trolls lurk outside, the bumbling bloodsuckers are often too caught up in their centuries-old pettiness to notice.

For two seasons, Natasia Demetriou has brought her distinctly British sense of humor to the character of Nadja, the strong-willed and dim-witted woman of the house. Demetriou spoke with THR about the brilliance of dumb comedy, acting alongside the scene-stealing doll that shares her likeness and how Nadja would be holding up during quarantine.

Were you a fan of the movie before the show?

I was such a big fan of the film. I remember seeing the trailer for it and thinking it was the best idea for a comedy. It came out around the same time as Twilight and True Blood, when vampire culture was hitting the mainstream and everyone was obsessed. I thought, “Yes! You’ve got to parody it, it’s genius!” And I would have jumped at the chance to do anything with Jemaine and Taika, even if it was just cleaning the house.

Were you into vampires?

I was obsessed with Twilight. I love the very, very serious drama of Bella and Edward. They were the most serious people in the world, with the worst senses of humor.

Is there a lot of improvisation on set?

We do a lot of improv. The scripts are there, and they’re great and amazing, but in the heat of the moment we might say something no one thought of or [find] the funniest way to [deliver a line]. It’s definitely a healthy mix.

How much of the transformation into Nadja comes from stepping into her wardrobe?

It’s definitely a look. The costumes are so heavy and make you stand up straight. Nadja’s not a modern woman — she’s definitely 800 years old. She has these very long, pointy nails, so I’m acting with nails. And I channel my dad and my Greek relatives. Everything with them is incredibly serious and dramatic. 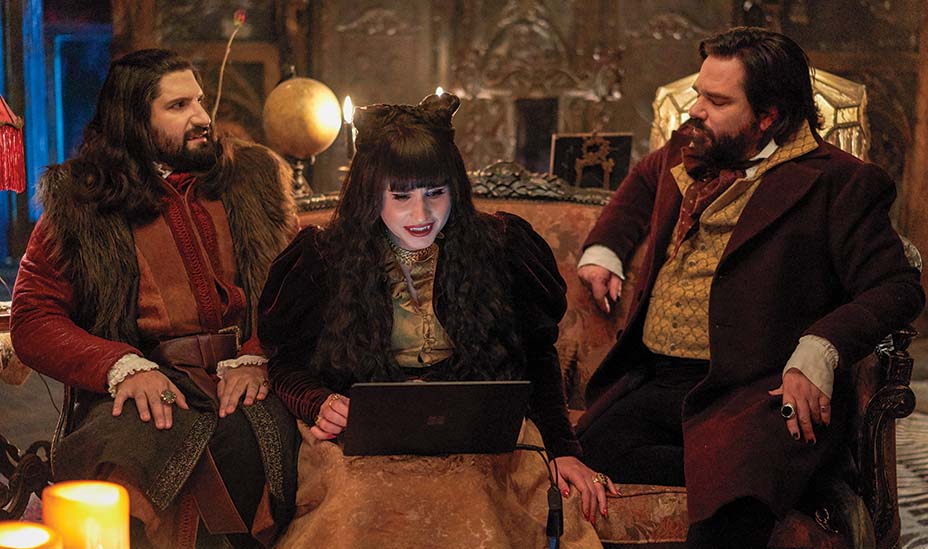 What’s it like being on an American series with such a British comic sensibility?

I feel lucky that we have people like [executive producers] Paul Simms and Stefani Robinson. We’re all on the same wavelength. It’s a shared love for this kind of comedy. The only weird thing is certain words in the script … What are the words they use all the time? Like, “buddy.” “Dude.” (Laughs.) I sound mad when I say that. My absolute favorite thing is slipping in references to old British comedies no one in America would know about.

A lot of the humor comes from these very stupid characters, and the show doesn’t attempt to be super serious, either.

I’m so overjoyed by it. Everything we do is to be funny and to make us laugh. Obviously, there are sweeter, softer moments, but there’s no point or message to it. I love comedies that broaden horizons, but what I love about the show is we don’t have that burden. And quite often I think, “I cannot believe I just said that.” So many jokes about farts, so many sperm innuendos. I don’t want to simplify it or put it down by saying it’s stupid. There’s a lot of effort and time and talented writers and producers that go into making it so stupid.

Is there a supernatural element or stunt you were really excited about this season?

All of the harness work is wild. You’re like, “I cannot believe it’s 4 o’clock in the morning and I’m upside down above a row of houses in Toronto.” And the doll … I can’t believe someone made it for me to act with. I dropped so many hints about taking it home with me, all of which were seriously ignored. I’m really gunning for a spinoff with Nadja and her doll: Nadja and Her Doll Take Manhattan.

As we look ahead to how scripted TV will respond to the pandemic, I have to ask: How would Nadja be dealing with all of this?