[This story contains spoilers from the “Personal Jesus” episode of ABC’s Grey’s Anatomy.]

ABC’s Grey’s Anatomy continues to use its platform for social change.

While wrapping up its domestic violence storyline — and a week after changing the portrayal of trans characters on TV — the veteran medical drama used Thursday’s episode to explore unconscious bias when a black 12-year-old boy named Eric is shot by police.

As it turns out, the youngster was attempting to break into his home after forgetting his keys. While reaching for his cell phone, police shoot the kid in the neck — thinking he was a black kid in a wealthy neighborhood who had a gun.

“It became very clear to me as I’m raising my 4-year-old black son that he will have different experiences in life no matter how much I’m in an upper-socioeconomic part of society. No matter what school he’s in or who his friends are, he’s still going to be seen as black boy and black man and that will alter his experience from other social groups,” episode writer Zoanne Clack tells The Hollywood Reporter.

Clack, a former ER doctor who started on Grey’s as a writer on the show’s second episode (ever), saw the episode as an opportunity to explore the conversation she has with her son when they pass police on the road — and do so overtly, a change from how the veteran Shonda Rhimes-produced drama has explored the subject in the past. 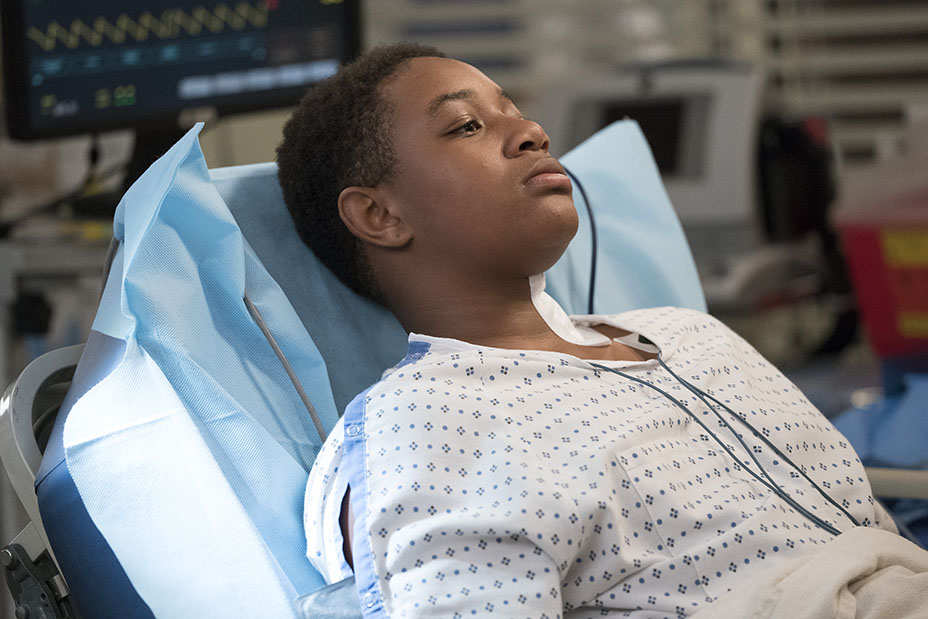 “On Grey’s, we’ve been portraying other-than-white groups in a very good light and trying to change the basic attitude of unconscious bias. But to go in there and talk about it in such a straightforward fashion was a brilliant opportunity,” she says.

During the episode, Jackson (Jesse Williams) becomes one of the first doctors to attend to Eric after an angry Ben (Jason George) brings him into the ER. Jackson is there when the boy’s upper-class family arrives. He instantly takes offense to the police calling the kid a “perp” and handcuffing him to his bed. “Your co-worker shot a kid in the neck for no reason; you need to figure out a new way to do your job,” he tells them, before sharing a deeply personal story with ex-wife April (Sarah Drew). Jackson then explains that he grew up in a wealthy neighborhood and was constantly stopped for what police thought was being in the wrong place — and at one point was frisked just because he was carrying a stereo home.

For Vernoff, who worked on the first seven seasons of Grey’s before coming back as showrunner for season 14, the scene between Ben and Bailey was the one that has stuck with her the most amid all her work on the show.

“I don’t think there’s one single scene that has had more impact on me personally and professionally than when Tuck puts his hands on his head and has to practice what he’ll say when stopped by police,” Vernoff says through tears. “It has changed my understanding of our fundamental differences and privileges. That I don’t have to have that conversation with my child and Zoanne and a respected and loved couple like Bailey and Ben have to have that with their children? It’s devastating. And it has made my understanding and empathy for parents going through that so much more real. My hope with this episode is that we can help change that. Zoanne said to me repeatedly in the process [of writing this episode] that she wanted to talk about unconscious bias and the fact that it does exist and that it is changeable. If we would acknowledge that it exists and stop denying it exists, there are methodologies to change this.” 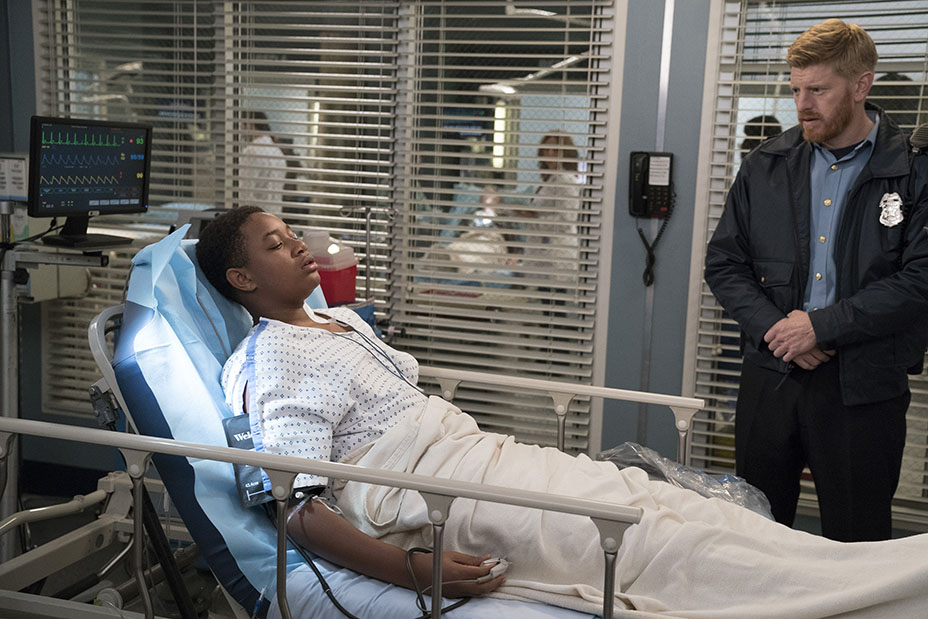 For Clack, who has seen her share of unconscious bias and gunshot wounds in the ER during her medical career, incorporating Ben and Bailey’s scene with Tuck was important — and something she pitched from the start. “I’ve always known that I have to give that talk to my son and it is part of my life,” says Clack, who drew on personal experience for the scene. “My son is adopted and I went to an adoption camp where there were several multicultural adoptions. There’s a lot of tension between black families and white families, though it’s not overt. The time we came together was during teachings about having the talk and white families having to experience what they thought they’d never have to experience because it wasn’t in their experience and they weren’t as aware as they should have been about what their black child is going through. I thought having the talk would be something that Ben and Bailey would be going through, too. As physicians, you’re higher up in the social strata and you’re not thinking that you’re in the hood or in circumstances where there are cops with guns who may be against you. Being on the road, driving while black and walking while black can be a problem. That was turning point for me and something that needed to be addressed.”

Vernoff said she wanted to drive home the scene’s importance and opted to air it without any music behind it. Both she and Clack stressed that awareness is the key to changing unconscious bias.

“As long as it’s sitting there and you don’t know it, it will continue to be passed on,” Clack says, while giving Vernoff credit for empowering the writers to lean into topical subjects. “It’s not something you can blame yourself for; it’s society. Black men are being portrayed more often as criminals on the news and in the media; it’s everywhere and it is part of growing up. When I was researching implicit bias, I found Project Implicit online. It’s enlightening because it’s for race, gender and sexuality. It explores how you feel in a split second vs. how you feel when you organize thoughts and answers. It was enlightening that people can still harbor these thoughts.”

Vernoff, who has been outspoken about Hollywood’s history of sexual harassment, sees a parallel between the industry’s “reckoning” post-Harvey Weinstein and unconscious bias.

“What we’re saying is if unconscious bias exists in all of us, the police are the focal point of this problem in the country because they’re carrying guns. There are police departments in our country where chiefs have acknowledged implicit bias exists and put new protocols and training in place — and radically decreased the number of shootings and the number of shootings of black men,” Vernoff says. “We in Hollywood are getting that message with #MeToo and Harvey and the impact of naming the problem, admitting it’s a problem and now taking measures to solve it. It feels like real change. We have to name the problem and put systems in place.”

In a larger sense, Vernoff made it a point to take on topical subjects when she returned ahead of season 14. She told the writers that it was a priority to make Grey’s funny — “like a rom-com again,” she says — while also keeping the show’s famed melodrama and romance. “We wanted to make it like the Shondaland rollercoaster [seen in the title card after every episode],” Vernoff says. “This is the saddest and most difficult episode of the season to process. And next week is also a really powerful and topical episode. But the one right after that is straight-up comedy. I don’t know that I’m able to separate my art from the issues that interest me and make me feel and think deeply. Those things merge in every conversation we have in the writers’ room.”

Sums up Clack: “This year we are tackling these issues head-on. Having been here for every season, we’ve always dealt with them unconsciously by generally portraying the antidote to these misconceptions by portraying people as people with regular problems and not having everything based on race and how that affects you or how angry people are in the world. We had an unconscious bias story last season so we’ve been tackling these subjects, but this year we’re speaking up about them and tackling them head-on.”