The NBA is throwing up bricks in national TV ratings over the first quarter of the regular season. A combination of big stars being absent from national telecasts, a marquee team mostly missing from the league’s two biggest broadcast partners and the fall of a recent dynasty have all factored into the drop. But there’s still time for the league to find its touch.

Through Dec. 6, viewership on the NBA’s three national TV platforms — ESPN, TNT and NBA TV (which is jointly owned by the league and Turner Sports) — is down 14 percent compared with the same period in 2018. ESPN is averaging a little less than 1.5 million viewers per telecast, down 16 percent year-to-year.

TNT, at 1.3 million viewers per game, is also off by 16 percent, while the more lightly viewed NBA TV has ticked up by about 17,000 viewers. Local ratings also have declined some, but not as steeply. NBA telecasts on teams’ regional affiliates are off by about 7 percent.

The league has faced something of a perfect storm of conditions contributing to the declines, says Horizon Media analyst Wes Morse. They range from injured stars being held out of nationally televised games, to the lack of a clear-cut favorite — a la the Golden State Warriors in recent years — to Fox’s Thursday night NFL games siphoning viewers from TNT’s NBA telecasts on the same night.

“Turner in particular is suffering just from their schedule featuring a lack of premier talent in their games due to injuries,” Morse notes. The small-market New Orleans Pelicans have been featured in four TNT broadcasts so far, in anticipation of No. 1 draft pick Zion Williamson making his league debut. Williamson, however, has yet to play following a preseason injury; those four Pelicans games have averaged 1.13 million viewers, 13 percent below TNT’s average so far.

“Some of the biggest names in basketball are not playing right now, and for a league driven by star power, missing so many top players is hurting ratings,” says Andrew Selepak, professor of sports media at the University of Florida. “Fans are not interested in watching backups.”

ESPN and TNT, like the rest of the cable ecosystem, also have suffered subscriber losses in recent years, which NBA commissioner Adam Silver has pointed to as a cause for the declines.

Also worth noting: The LeBron James-led Lakers, typically among the NBA’s biggest draws, have only been on TNT and ESPN a combined four times so far — and have accounted for the most-watched NBA telecast on both channels. (In contrast, the team has been on NBA TV seven times, drawing seven of the channel’s eight-biggest audiences so far.)

Given the unique set of circumstances the NBA has faced this season, Morse expects the league’s TV ratings to rebound somewhat in the early part of 2020, when it has the sports landscape more to itself. He adds, “It’s still very much in demand from an advertiser perspective.” 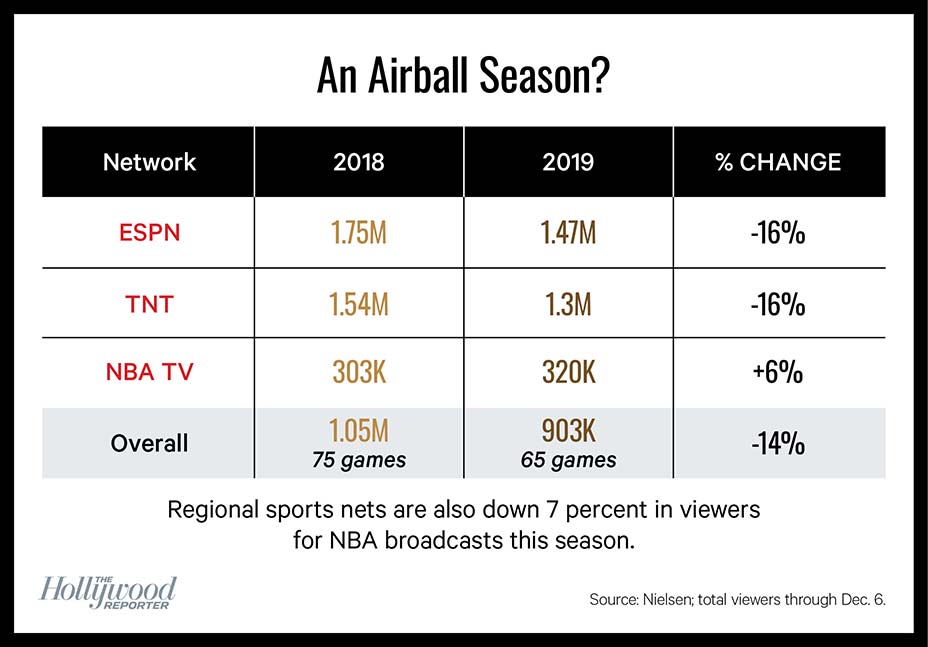