With two very funny and very experienced Hollywood heavyweights leading the cast, it should come as no surprise that the feeling on the set of Searchlight’s Downhill was one its young star Julian Grey described as “so much fun.”

Working with Will Ferrell and Julia Louis-Dreyfus meant improvisation was a daily occurrence, a prop or two may have broken in the name of art and keeping a straight face was a real test of dramatic will, Grey explained Wednesday on the SVA Theater red carpet for the film’s New York premiere. The energy was often high, but the cast and crew behind the film say that that wasn’t just due to the comedic skills of its stars.

In fact, Grey says audiences shouldn’t expect hours of laughs when they go see the film, an adaptation of Ruben Östlund’s critically acclaimed and award-winning Force Majeure. The story deals in as much American comedy as “very serious” and “heartbreaking” subject matter, the actor told The Hollywood Reporter.

“We usually are against — coming from the indie film world and art house world — remaking things,” Downhill producer Stefanie Azpiazu said at the event. “And so when the idea came up, I think we wanted to bring a different element to the story, and I think that even though they have the same inciting incidents and a lot of similar scenes, they explore different things and exist on their own.”

“It’s fun to watch it, but yet at the same time, it’s a movie that will leave you something to think about,” star Giulio Berruti told THR. “And that is, to try to be more empathetic with other people, especially the one that you claim you love, rather than focus on yourself.”

Downhill traces a family’s increasingly strained dynamics after a man runs from an approaching avalanche, leaving his wife and two sons behind. Elements of comedy were reflected on- and offscreen during filming but so were the narrative’s messages of empathy and thinking about others, thanks to leading actress and producer Louis-Dreyfus.

Berruti said that although he was “super nervous” the moment he walked into his audition with the Veep and Seinfeld star following a taxing 12-hour flight from Italy, “she made me feel so relaxed, so calm and so welcome.” Star Zoe Chao felt similarly about Louis-Dreyfus, who made wearing multiple hats “look easy.”

“If you asked the veterans on our set who came from France, Ireland, Germany, Austria, the U.S., they all said by the end of our production that it was the best set they’ve ever been on and I think that speaks a lot to her leadership,” Chao said at the premiere.

Taking on the title and responsibilities of both a leading actress and producer isn’t new for Louis-Dreyfus, who did double duty on Veep and The New Adventures of Old Christine. But Downhill marks her first producer credit on a narrative feature.

“It’s a different kind of mountain to climb — pardon the metaphor,” Louis-Dreyfus said while speaking to THR at the premiere. “It took a long time to get this movie done. Film can sometimes be a much lengthier process than television, which is much more fast-paced, and so that was something that I had to adjust to and steel myself for — to keep pounding away at it. Because there were moments where it was discouraging.”

Her one prior producer credit on a feature-length film was for the 2015 documentary Generosity of Eye. The more personal tale explores how her father, William Louis-Dreyfus, who died in 2016, turned his substantial art collection into a pillar of education after donating it to the Harlem Children’s Zone. Her relationship to Downhill was different, with the chance to produce the adaptation coming on the heels of her work on Searchlight’s Enough Said.

“They’d just seen the film in Cannes, they’d spoken to Ruben Östlund, the director and writer of the original Force Majeure, and he was very interested in an American adaptation,” Louis-Dreyfus said. “So they screened it for me, and they asked me would I be interested in developing it and that was for me an opportunity not to be missed. There was too much goodness there not to take advantage of this.”

Louis-Dreyfus, who originally optioned the material, may have faced some different challenges steering the big-screen dark comedy set “in a place where no one spoke our language,” according to producer Anthony Bregman, and every day off they were skiing with an instructor, said Grey. Her fellow producers Azpiazu and Bregman, a professional duo for 20 years, said, however, that nothing about what she did “felt beginner-like.”

“Some producers in this business are producers in name only, but she was someone who was an absolutely essential part of it and a dream to work with,” Bregman told THR. “All the things that she’s been involved with, whether she’s credited as a producer or not, she takes ownership of. And she took ownership of absolutely every aspect of this, whether it was the creative, the business, the diplomacy or the mechanics of it.” 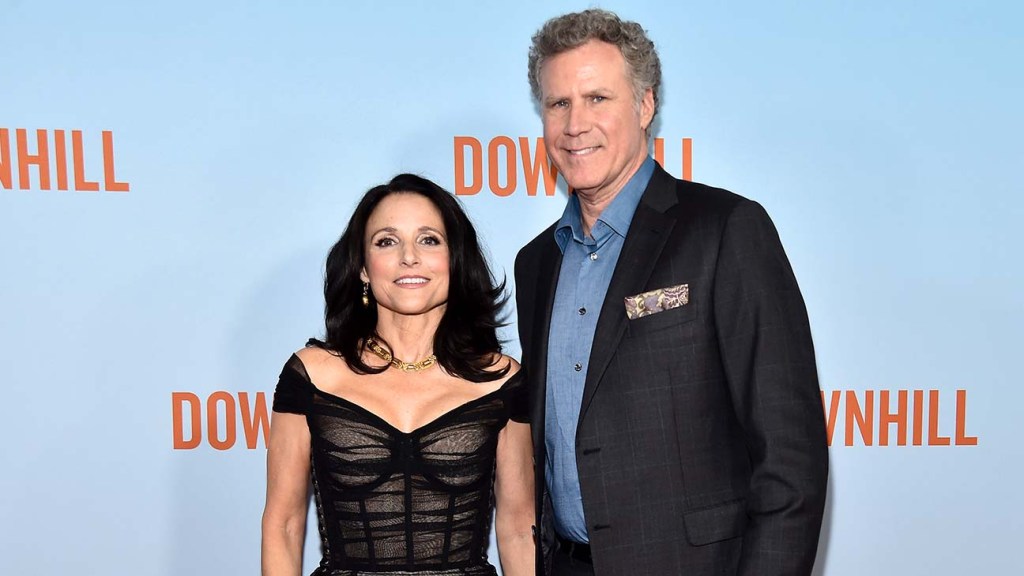 Co-star Ferrell is also no stranger to wearing different hats, with recent producer and executive producer credits on everything from Succession and Hustlers to Vice and Booksmart. His was the kind of “energy and wisdom” that the project benefited from “without having to pay him what producers are paid,” Bregman joked.

Speaking to his experience working with Louis-Dreyfus, Ferrell told THR that what audiences know about her as a comedic actress only scratches the surface. And although just being “the hired actor” — instead of dealing with script and notes meetings or studio calls — was a luxury, watching his co-star lead proved to be a real learning experience.

“She’s so smart, she’s so great with story, and she’s such an excellent leader,” Ferrell told THR. “That was fun to watch — how intuitive she was, how open she was to other ideas but also assertive. To go like, ‘You know, I just think we should do it this way, let’s move on.’ I really learned a lot from her.”

Actresses are known to make the transition from star to producer, with Bregman noting that women are already more represented in the field of producing than some other big-screen disciplines. But actors specifically moving into the space is about people who are no longer interested in asking for permission.

“As a producer, you’re not given permission to do it. You’re the one doing it,” Bregman said. “So you don’t have to hold your hand up, and no one can keep you out of it. So the idea of more women actresses moving more into producing comes with the idea that they don’t want to raise their hand and ask for permission anymore.”

Azpiazu said she completely understands why more actresses, including Louis-Dreyfus, are taking on more leadership roles in film.

Louis-Dreyfus helped create both a mindful set and nuanced female characters while acting and producing in Downhill, and for that supporting actress Chao is hugely appreciative.

“It’s really reassuring for me coming up in this business to know there is a leader like Julia at the top who is as kind as she is talented, but also so smart and so intentional,” Chao told THR. “She is showing me the way, and I think this business really needs women like her to tell stories.”