Will Ferrell and Molly Shannon kicked off 2018 as local TV hosts Cord Hosenbeck and Tish Cattigan to host live coverage of the Rose Parade. The satirical Funny or Die broadcast streamed live on Amazon Prime Video on Monday morning.

Playing fictional local TV hosts who have covered the annual event for the past 25 years, the Saturday Night Live alumni put on their best smiles and laughs to share fun facts about the floats while evoking their positions’ signature banter. “It really is an army of people making these floats,” said Shannon of the flower-covered creations, and Ferrell added, “I wish I could get them to clean out my garage! My garage is so dirty — I have so much stuff, I don’t know where it comes from. I may be a hoarder!”

Throughout the broadcast of the annual Pasadena event, Ferrell and Shannon, seated with headsets in their rose-decorated announcement booth, occasionally tossed the coverage down to their correspondent on the ground, fellow SNL alum Tim Meadows. Here, Meadows actually worked at SNL but doesn’t like to talk about it. When Ferrell pushed him to share an anecdote of working with John Belushi, Meadows clarified, “I was like 12 when he was on the show.”

Between floats, the duo poked fun at the numerous marching bands, skewered the inaccuracies of some parade participants’ historical uniforms, lamented fantastical floats’ unrealistic premises, reminisced about their past years covering the event and pondered the possibility of a high school named after Donald Trump.

“Do you think anyone will ever name a high school after Donald Trump? He’s so polarizing — can you imagine?” asked Shannon. Ferrell concluded, “Not a public one, but one that you could buy a high school degree from without going to class, for sure.” The two later joked of dismissing their biased fact researcher and did their best impression of Trump’s Apprentice catchphrase “You’re fired!” — a line they attributed to comedian George Carlin.

Other notable moments of the broadcast included the hosts’ wild screaming when Earth, Wind & Fire emerged from inside a float of The Forum (“Even though that song is called “September,” I can hear it any month of the year!” said Ferrell), singing the Farmer’s Insurance theme song five times in a row (“Can you sing it like you’re gonna cry?” challenged Shannon), and ubiquitously plugging Amazon Prime Video offerings (Quantico! Sneaky Pete! The Grand Tour! The Marvelous Mrs. Maisel! Now on Amazon Prime Video, included free with your Prime membership!).

The parade traveled its usual route, which “stretches fives miles down Colorado Boulevard, and then nobody knows what happens after that,” explained Meadows. Shannon then asked, “Is that true? No one knows what happens at the end of the parade?” Meadows just shrugged, “I don’t know. I’m just out here making stuff up like you guys.”

An hour after the event wrapped its live coverage, the special event collected nearly 2,000 reviews — half of which gave the broadcast only one star on Amazon. Though some of these highlighted technical difficulties, most users’ reviews either did not realize that the show was a satire or were adamant against its tone, advising Amazon to instead strictly follow the traditional local broadcasts that the event was parodying. “The Rose Parade isn’t something to poke fun at!” said one user, while another noted, “The non-ironic KTLA stream was much more entertaining.” The broadcast had an average of less than two stars just before the parade ended, but it has since jumped up to three stars. 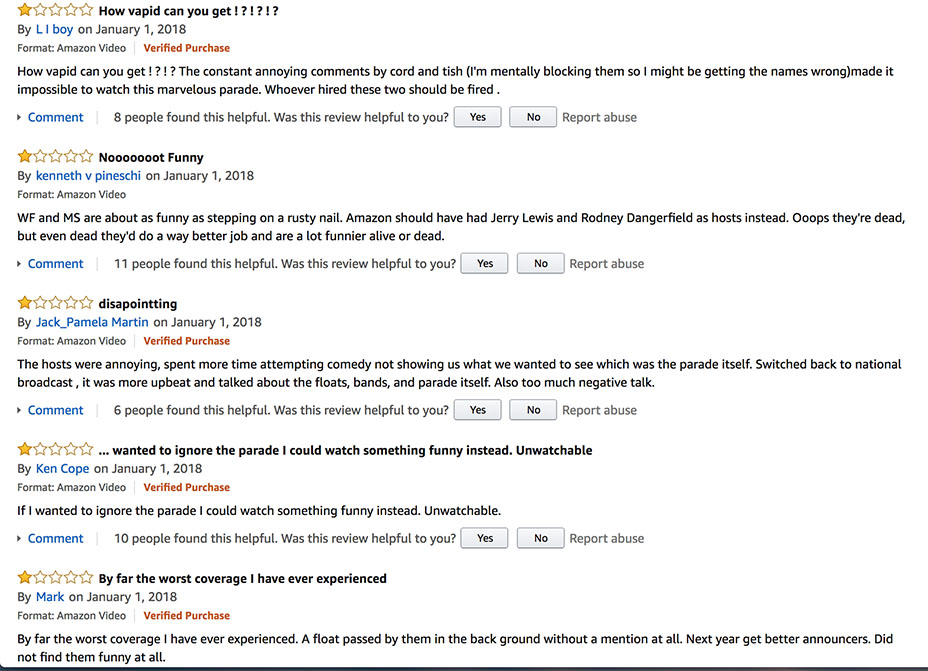 Critics’ Conversation: The Exhilarating Stupidity of Netflix’s ‘The Circle’