[This story contains spoilers from the first season of NBC’s Will & Grace revival.]

Will & Grace capped off the first season of its NBC revival with happy news all around — except when it comes to Will and Grace.

Thursday’s season-ender left best pals and roommates Will Truman (Eric McCormack) and Grace Adler (Debra Messing) potentially adding another descriptor to their relationship: siblings. After losing their respective spouses, Grace’s dad (Robert Klein) and Will’s mom (Blythe Danner) found themselves single and enjoying one another’s company so much so that they decided to announce a quickie engagement. And they weren’t the only ones with good news: Jack McFarland (Sean Hayes) also accepted his new boyfriend’s proposal after a whirlwind trip to Ibiza, Spain.

Both of the newly engaged couples told Will and Grace, rather harshly, that their impending nuptials and decisions to be happy and in love were motivated by the desire to not turn out like Will and Grace — alone and in what they collectively deem to be in an unhealthy relationship. Even Karen Walker (Megan Mullally) called off her long-term affair with her lover (Alec Baldwin) to keep her marriage somewhat of a priority.

Suffice to say, Will and Grace did not entertain the image of being siblings and the finale left the pair questioning themselves, each other and the decisions they have made to get them to this point. With the comedy already renewed for two more seasons (through 2020!), Will & Grace creators and showrunners David Kohan and Max Mutchnick tell The Hollywood Reporter that anything is on the table when it comes to the starring pair’s dynamic when the show returns. “It’s all thrown into question,” says Kohan.

When you started out with the revival, did you have a clear vision of where you wanted the season to end up?

David Kohan: It all started with this idea that we wanted to pay tribute to Bobbi Adler — to Debbie Reynolds — at some point and go back to the house. From there, it evolved into a conversation about how Will’s father is no longer with us — Sydney Pollack, the actor who played him, is no longer with us — and at some point, we want to acknowledge that as well. Then we said, “Hey — they’re single! And Will and Grace are too close and in a relationship that they’ve often referred to as incestual — what happens if we literally make it that?”

Max Mutchnick: We were telling a story about Grace’s family and the only actual hurdle for us, as far as that went, was recasting the part of Martin Adler, because [the original actor who played him] Alan Arkin was no longer going to be available to us. The Alec Baldwin story really was a separate thing entirely, and we melded the two of them together. We were doing the Debbie Reynolds tribute story, the finale and the introduction of Grace’s new father, played by Robert Klein, and we feel like we hit a homerun with the chemistry of Robert and Blythe and Debra.

Kohan: We shot the two-part finale over the course of 10 days in January. There were a few schedules that needed to be accommodated. We knew at the beginning of the season the people that we wanted to write for — so much of this has been planned out. You can’t go to an actress as busy as Blythe Danner and say, “Hey, do you want to come play next week?” We would have shot the finale in November if that was when everybody was available.

Mutchnick: It was a little spotty because we had so many different actors with so many different schedules. Baldwin was such a big get for us, that we had to make sure we built the week around his time and the time that we had with him. For the most part, all these actors want to come and play with the actors that are on Will & Grace, so it has never really been a struggle to schedule.

Mullally had joked that her scenes with Baldwin might get you into trouble with broadcast’s standards and practices. What was the set like when they were filming their “no touching” sex scene?

Kohan: They rehearsed it and figured out what looks the best. It started off with them closer together and the farther apart they were, the funnier it got. When they were doing their simulated “I won’t touch you, but let’s have sex” bit, it went on and on and it kept getting funnier for the audience. The real question was: What’s going to be acceptable and what’s not? How far can we go?

Mutchnick: I thought the scenes between the two of them were some of the funniest we’ve ever done in the entire run on the show. What was funny about the making of those scenes was the legal representation from NBC that was on the set watching the scenes play out and deciding at what point can we imply a certain behavior before it gets too much for primetime TV. We can walk things up to a line, and then we are not allowed by FCC regulation to cross them. (Laughs.) 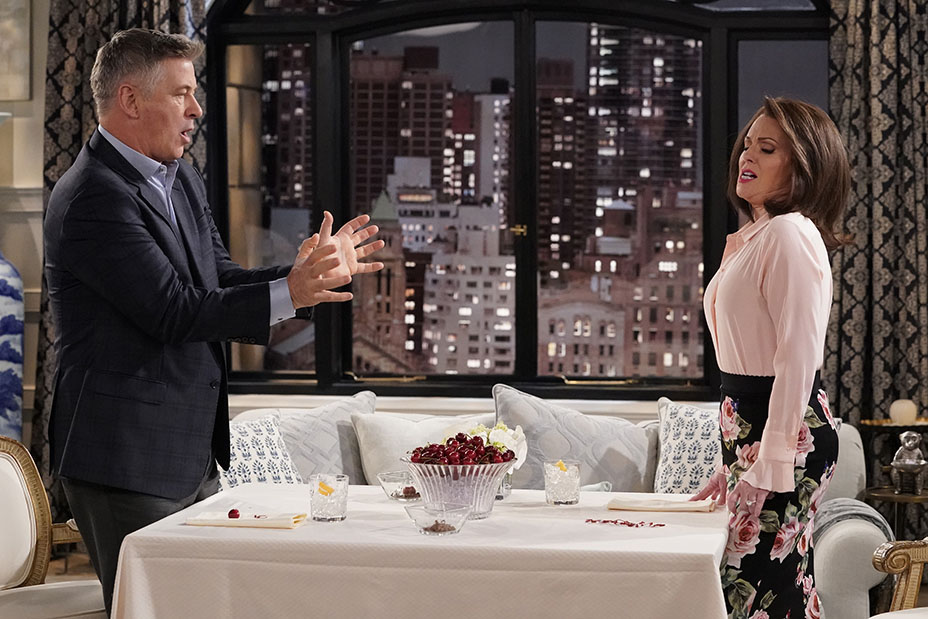 You leave Will and Grace in a state of existential crisis. How do you describe what is going through their heads at the end of the finale?

Mutchnick: We always write ourselves into a corner. We go on a holiday and then we come back and go into a story camp and figure out how we’re going to write ourselves out of that corner. The relationship between Will and Grace is fraught and problematic on paper, but it works for them in practice. As they get older, I think they have to figure out more involved, complicated ways to justify why they continue to spend their lives with each other.

Kohan: They had just made their peace with each other. Grace said, “Look, I am in this situation and I am happy, and I don’t have to apologize for my contentment with this unconventional situation.” Will had kind of gotten there by default as well and now, suddenly, it’s all thrown into question. They are thinking: “Everybody seems to be doing things in reaction to what our life is, maybe we are deluding ourselves.” So, who is going to take some kind of rash action? But it also seems at the point where you are middle-aged and thinking, “I want to do something. I want to leave my mark. If I’m not going to have kids, what am I going to do? It can’t just be inertia that takes me through the next 30 years. I need to make some kind of move here in my life and it has to happen soon.” So, that’s where they are.

How does having the two-season renewal give you confidence to, maybe, take a hammer to what viewers have grown accustomed to from the show?

Mutchnick: When we get confidence we don’t necessarily say, “Let’s blow it all up.” But I do know what you’re saying. Having two seasons is a really wonderful gift that NBC gave us and we get to relax — well, we’re never relaxed — but we get to open ourselves up because we know we’re going to be here. We want to try to tell the most interesting stories that we can about these characters.

Are Messing and McCormack worried that Will and Grace might not be in the best place, together, when you return?

Kohan: There is a trust with the actors. The attitude from their perspectives is that they know that there has to be twist and turns and that things have to change. It can’t just be stasis for them, because the show will get stale and they will feel it — and they don’t want that at all. They trust the direction that we take. Eventually, they are always a part of the decision. They’ll weigh in if they have an issue, but right now they don’t seem concerned. The attitude is more, “I wonder what’s going to happen.” Which is our attitude, too. 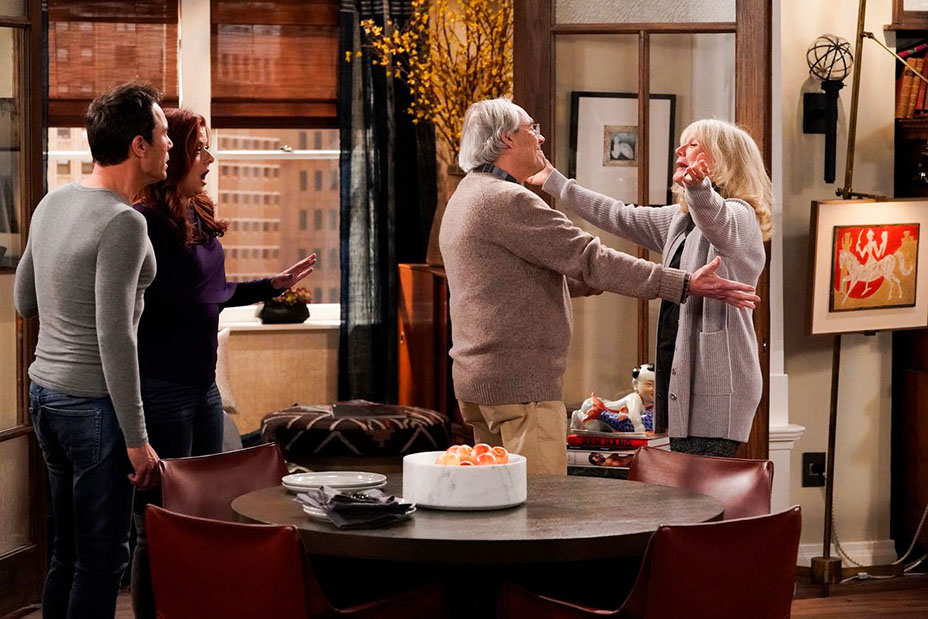 If they are indeed on the road to becoming step-siblings, will Klein and Danner be returning next season? And does the same go for Jack’s fiance Estefan (played by Brian Jordan Alvarez) — are these weddings pushing ahead?

Kohan: In some form! Either they’re happening or they’re not, in which case, both are stories, right? We’re planning on them returning.

Mutchnick: We always want these characters to live on. Once they’re on the show and when they fit in as well as they do, we hope to see these people over and over again because we feel like the audience likes it as much as we do.

This season was very topical and relevant. What did you learn about what worked, and maybe what didn’t, and how will you apply that going into next season? Will you continue to rip from the headlines and be as political?

Mutchnick: Well, last week we learned that if we fully support Trump, we will get 18 million viewers to watch the show. But overall, I think the lesson is always the same. The shows that are the most entertaining and the most relatable are the most satisfying on every level.

Kohan: We really do ask ourselves the question, “How would the characters respond to this?” That is the question that we put first. If it would have impact on these people then yes, we will tackle it.

Mutchnick: I think we will get ourselves into trouble if we start to write from a place of what’s going on in the news. It’s better for us to stick with these four characters and how old they are and what they have to wrestle with emotionally. And if they cross paths with stories that involve politics because of their character traits, then so be it. But it’s never going to be motivated in the direction of: What’s on the cover of The New York Times?

You mentioned the 18 million viewers who tuned in to the premiere of the Roseanne reboot. Is there room for all these revivals on TV? Do you see it as welcome competition to remain topical?

Mutchnick: I think the more, the better. If there are more sitcoms out there that are doing well, that audiences are watching on network television, that’s only good for us. I don’t think that we should have any problem with anybody else doing well. The more the merrier.

What did you think of the Will & Grace finale? Sound off in the comments below.