Grace Adler came forward with her #MeToo story on Will & Grace, and for the second week in a row, the NBC sitcom revisited the past in order to tell a crucial story for the present.

The character, played by star Debra Messing, revealed that her father’s friend had sexually assaulted her when she was 15 on Thursday night’s episode of the second season of the revival. The episode, “Grace’s Secret,” brought to the surface a decades-long secret that Grace finally spoke out loud to her father, Martin Adler, played by returning guest star Robert Klein.

The powerful reveal, delivered with an emotional performance by Time’s Up activist Messing, was a direct response to the #MeToo movement and, specifically, the testimonies that were given by Bill Cosby’s accusers.

“This episode was an outgrowth of what was going on with the Bill Cosby case,” co-creator Max Mutchnick tells The Hollywood Reporter. “The conversation started when we began hearing some of the testimony from the women that had been assaulted by Cosby. We were very taken by the raw coverage of these stories and what made them so potent was the fact that we were hearing the specifics about what had happened to these women.”

In the first celebrity trial of the #MeToo era, Cosby was ultimately sentenced in September to three to 10 years behind bars for drugging and sexually assaulting Andrea Constand, one of the 60 or so women who came forward to accuse the former Cosby Show star of drugging and violating them over the past five decades.

“They weren’t being told in dark corners,” Mutchnick said of the testimonies from the Cosby accusers. “They were being told publicly and they were loud and proud, and because of that, I think they helped a lot of women. We came into the room and started talking about, ‘How can we write to some of this in the show?'”

David Kohan, the other half of the Will & Grace duo, tells THR that “before the year even started, I remember [Max] saying something along the lines of, ‘Grace probably had a #MeToo moment.'”

When it came time for Grace to share her moment, the female lead of the revived comedy did not hold back any details on the Nov. 1 half-hour.

“It was hot so I had to have my hair up and it showed off earrings that I borrowed from mom that made me feel really grown up,” Grace recalled to her father, who was at first in denial about what he was about to hear about his friend, Harry, who had since passed away. “And then at the end of the day, Harry called me into his office. I walked in. He shut the door. He closed the blinds. And then he pushed me up against the wall. I tried to scream but he told me, ‘Quiet.’ Then he started kissing me and touching me and then he pulled down my pants and put his fingers up —”

The inclusion of those details was the source of many conversations that Mutchnick and Kohan had with their writers. “There was a lot of discussion in the room about how far we would go,” says Mutchnick. “But we were always on board with getting specific. We knew that we were not going to tell the story in broad strokes. There was never going to be a line where Grace said on this sitcom, ‘He touched me down there.’ It was always going to be something specific and graphic and we just had to figure out how far we wanted to take it and what felt right for the show.”

Ultimately, Kohan says they decided to make the scene as graphic as the assault was for Grace. “What was the situation? What happened to her? And if you say what happened to her, then you have to describe what it is,” he says.

One line, however, was added to the script after Christine Blasey Ford delivered her riveting testimony before the Senate Judiciary Committee on Sept. 27. When Martin Adler tries to dismiss his daughter, he tells her, “Maybe you’re misremembering.” Grace replies adamantly, “No. I remember. I remember every single thing that happened that day.”

The first draft came in before Brett Kavanaugh was ultimately sworn in as a Supreme Court justice. That line, says Kohan, was “a definite response to what we had heard” in the aftermath of the testimonies. “There is something so upsetting and condescending and minimizing about somebody saying, ‘Hey, I believe this happened to you, but maybe you’re misremembering the person,'” he says. “It’s so incredible and that is basically the lie that people have to believe if they say, ‘I’m going to believe Dr. Ford but I’m also going to believe Brett Kavanaugh.’ Of course, it’s absurd. For an entire political party to try to walk that tightrope is insane.”

Still, though the co-creators said they knew it was time for Grace to tell her story after hearing all the brave testimonies from women against their accusers, they say they were sensitive to “not take over in this space, because it wasn’t our story to tell in a way.” The episode was written by Suzanne Martin, and when it came time for the table read, they listened to Messing as she lent the scene further authenticity.

“There were moments after the run-through where she said, ‘This feels too fast for me’ or ‘This turn doesn’t feel authentic.’ Whatever it was,” Kohan recalls. “She had her instincts about how this would come out and how it would play, and it was little moments here and there where she said, ‘I don’t think she would say this in this moment.'”

In the end, Grace’s confession leads to a breakthrough moment with her father. Grace reveals, to viewers only, that the only person she told was her late mother, and that second reveal leads to a moment of tribute as Grace visits the resting place of the late Bobbie Adler, who was played by the late Debbie Reynolds. Last season, the show dedicated an episode to Reynolds, who died in December 2016.

“I’ll go on record saying that what Debra did the week that she made this episode is that she showed everybody she is the best leading lady who has ever starred on a sitcom,” Mutchnick raves. “When you consider the scope of what she is able to play inside one episode, it’s absolutely remarkable. We both have such an immense amount of respect for her. And to her credit, she nailed it on the first take. I’m more in awe of her these days than I really have ever been.” 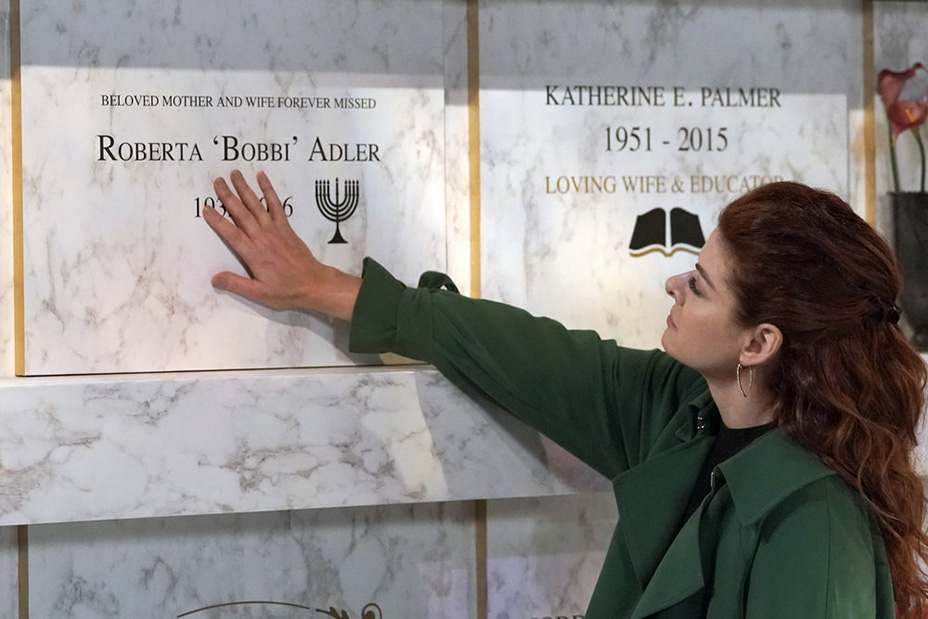 Why 'Will & Grace' Revisited Will's Coming Out Episode 18 Years Later