With only three episodes left until Will & Grace bows out for a second time, the NBC revival on Thursday paid tribute to another iconic comedy when it transported its foursome to re-created sets from I Love Lucy.

In the episode, titled “We Love Lucy,” Grace (Debra Messing), Karen (Megan Mullally) and Jack (Sean Hayes) each claim that they could best portray Lucille Ball’s Lucy Ricardo, and they ask Will (Eric McCormack) — who plays Desi Arnaz’s Ricky Ricardo in all the reimagined scenes — to be the judge.

“When you do something that either pays tribute to or parodies something in the past, the question is always: How do you make it relevant for an episode today?” Will & Grace co-creator David Kohan tells The Hollywood Reporter of conceiving the idea with Max Mutchnick — an installment the pair calls the most production-heavy and technically challenging feat they’ve ever attempted. Mutchnick adds of the tribute twist, “Once we made the decision to actually have the characters talking about the show I Love Lucy, it came together. We could have Will and Grace talk about how they felt about I Love Lucy. Once we did that, and Karen and Jack walk in and weigh in on how they felt about the show, we knew that was the way that we were going to find the episode that we wanted to write.” 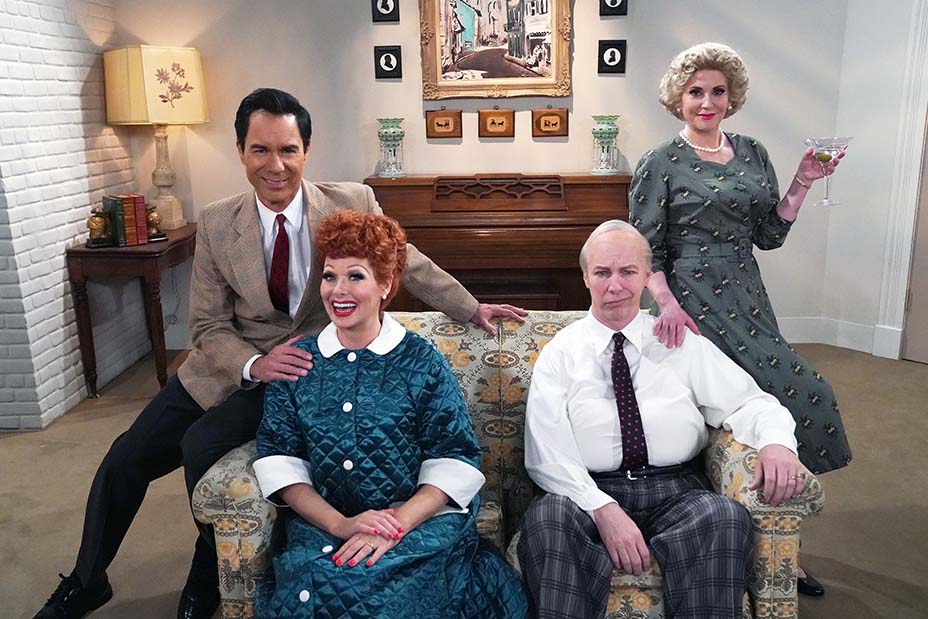 A tribute to the 1950s sitcom was a 20-year fantasy for star Messing ever since Will & Grace‘s original run. But it was a special request from Bob Greenblatt when the former NBC Entertainment chairman first met with Kohan and Mutchnick years ago about bringing back Will & Grace — which will wrap its three-season revival run on April 23 — that prodded the idea into becoming a reality.

“Bob is a world-class executive in that he’s a writer’s dream — he doesn’t get involved in your process. So when he does ask for certain things, you want to deliver them,” says Mutchnick of the meeting. “He said, ‘You should do something that speaks to the relationship between your show and I Love Lucy, and the way that the shows have a similar foundation.'”

When the episode announcement came during the third and final season of the revival, the actors only had a typical week to prepare. Messing tells THR that receiving the script was “scary and intimidating,” but that the tribute was a miraculous accomplishment. “It was the first time in history that [Ball and Arnaz’s daughter] Lucie Arnaz and her brother [Desi Arnaz Jr.] had given permission to anyone to recreate the iconic scenes from I Love Lucy,” she explains. “We all immediately felt overwhelmed and emotional. Everyone in the crew was walking around kind of stunned.”

The episode flashes back and forth between present-day in Will and Grace’s apartment to several famous I Love Lucy scenes in fantasy sequences — which were recreated frame-by-frame and line-by-line as Messing, Mullally and Hayes alternate characters around McCormack’s steady Ricky Ricardo. When not playing Lucy, the actors take turns as the Ricardos’ neighbors, Ethel and Fred Mertz. “Vitameatavegamin” called upon Messing’s physical talents when Grace gets her turn as Lucy; “Chocolate Factory” sees Jack as Lucy and Grace as Ethel (originally played by Vivian Vance), with special guest star Arnaz playing the role of the See’s Candies foreman; and the “Grape-Stomping” sequence played out with Karen as Lucy, along with guest star Leslie Jordan. 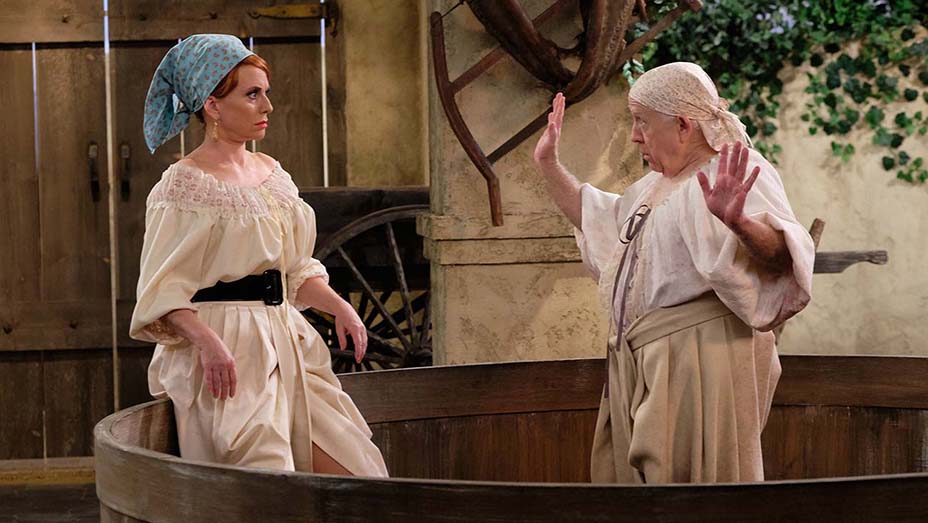 Achieving the authenticity Kohan and Mutchnick wanted required every department — from production and wardrobe to hair and makeup; to props, set design and postproduction — to bring their A-game. Those teams created 45 custom-made costume pieces; built exact replicas of the Ricardo apartment, candy factory, Italian wine vineyard and television studio from the Vitameatavegamin commercial; and brought in 14,000 pieces of the same milk chocolate-covered buttercream from See’s Candy, 1,200 pounds of black grapes for wine-stomping and 48 bottles to match the original Vitameatavegamin prop. Each actor spent three to five hours in the makeup chair to complete their transformations.

“The crew was the most amazing thing — how each department really took this seriously and made it a point of pride to do the best possible job of recreating it that they could — they found the original-shaped Vitameatavegamin bottles on eBay,” notes Kohan. And while Mutchnick says it was “thrilling” to see the exact set replicas, having Lucie Arnaz both appear in and anoint the episode was the icing on the cake: “It was Lucy, as well as her daughter and her daughter’s child, so Lucille Ball’s great-grandchild was on the set and that was incredible.”

And there was an added layer of significance, given that this passing of the comedy torch from one iconic sitcom to another was coming so close to Will & Grace nearing its series end. “I don’t think about the legacy of the shows as much as I think about the relationship of the art form, and this way of performing and the performing art of doing a four-camera comedy,” says Mutchnick. “It takes such an expert level actor and comic to be able to do what the company of I Love Lucy was able to do and what our cast can do. It’s just so, so tough, and I have a lot of respect for the actors who are able to do it and to do it as well as the original four and our four.” 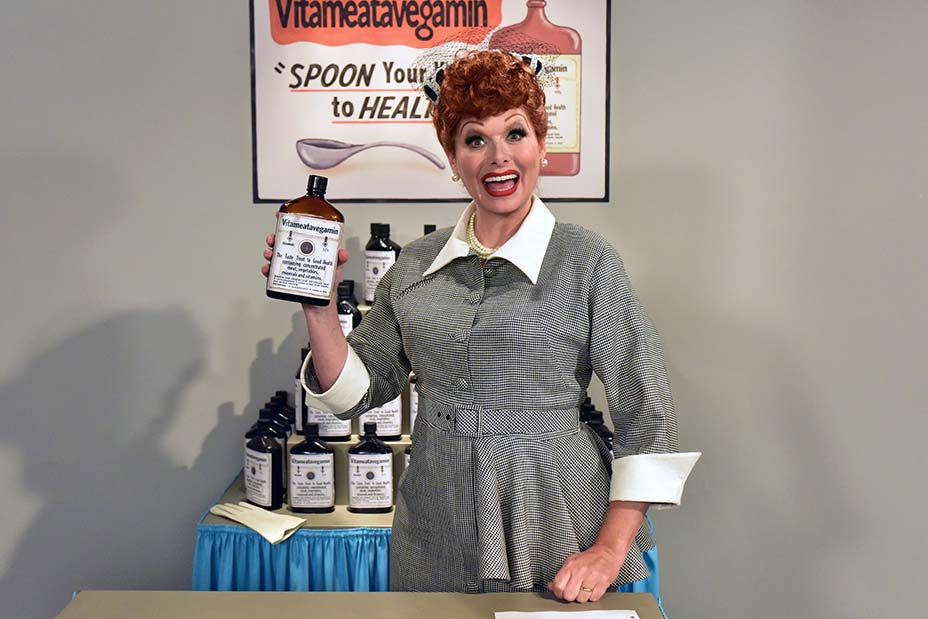 When it came time for Messing to step into Lucy’s shoes, honoring the star’s legacy was certainly top of mind. “My whole life, I have dreamt of playing her, and I also swore to myself I would never play her because she’s untouchable. There is no one who even comes close to her,” says Messing, Will & Grace‘s own redhead with a fearless knack for physical comedy. “And here we are where I’m told, ‘Guess what, you’re doing it and you’re doing the seven-minute Vitameatavegamin scene.’ It’s like doing an opera!”

The actress analyzed the “Vitameatavegamin” and “Chocolate Factory” scenes over and over again, listening to them on headphones to learn the musicality of Lucy’s character. She looked at every pause, noting things like when Ball’s eyes would grow bigger or when she would physically recoil and, of course, when the drunkenness kicked in during the commercial taping.

“I just fell in love with Lucy when I was young,” says Messing. “She taught me what I think is funny. In a way, she helped create my comic sensibility. She certainly inspired and put that hunger for physical comedy in me. Growing up, I was just like, ‘I want to do that. I want to play and I want to be praised and I want to be naughty.’ She was always getting into trouble; she was ambitious and trying to have experiences that she wasn’t supposed to have as a woman, or as the wife of Ricky. There was something subversive about her and I think that’s what really set me on my path. In retrospect, I now recognize that most choices I’ve made in my career have been in search of a little bit of that subversiveness.” 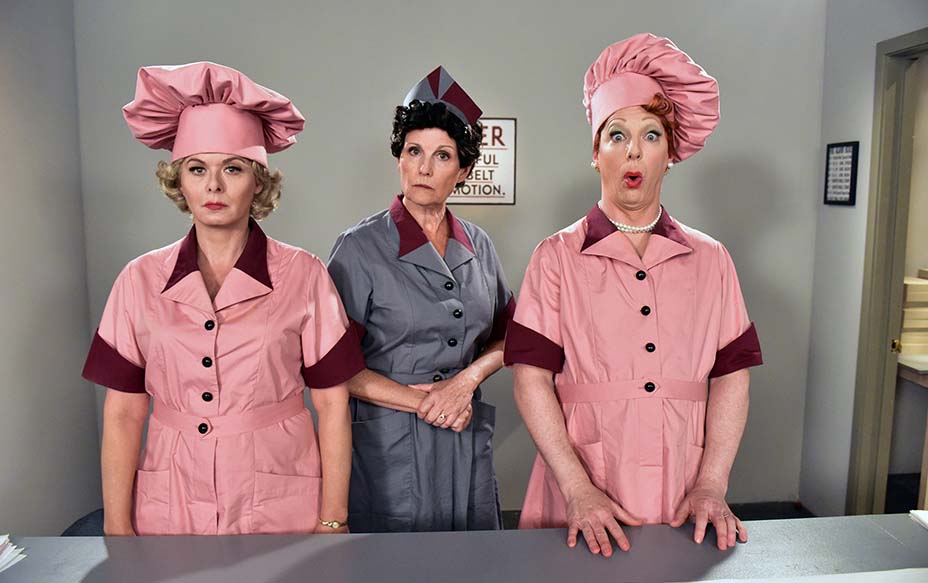 The result of Messing’s preparation surpassed Kohan and Mutchnick’s expectations when it came time to film. “It was incredible to watch Debra Messing do the Vitameatavegamin monologue and get the very similar laugh spread that Lucille Ball got,” says Mutchnick of the live studio audience reaction. “We didn’t clock the way that the laughs were done originally and we didn’t fill anything in. If there was a new laugh, we let it be. But they were almost pound for pound the way they lined up — the way that audience laughed was the same way that our audience laughed.”

Though Messing’s transformation into Fred (originally played by William Frawley) took the most time — “Fred really was the one that put me over the edge,” she says with a laugh — seeing her reflection in the mirror as Lucy had her fighting back tears. “It just felt like the greatest gift we could be given,” she says. “It felt like a privilege that we could only have dreamt of and talked about as a fantasy — and here we were, we were actually doing it.”

'Will & Grace' Cast Toast End of 3-Year Revival: "What a Miracle"