NBC’s Will & Grace paid tribute to the late Debbie Reynolds on Thursday night, and while the touching episode was bittersweet for everyone involved, the half-hour was especially poignant for Reynolds’ TV daughter, Debra Messing.

“It was very important to Debra Messing that we address both the character, Bobbi Adler, and the woman, Debbie Reynolds,” Max Mutchnick, alongside his co-creator and co-showrunner David Kohan, told The Hollywood Reporter recently at PaleyFest. “We loved her and miss her. She was a fantastic part of the show and she would have been a part of the revival, but, you know, such is life.”

Reynolds, who appeared in 10 episodes of the show’s original run (watch a clip below), died in December 2016. A photo of her and Messing in character has been featured in Will Truman (Eric McCormack) and Grace Adler’s (Messing) apartment on the new episodes, and Grace opened up about the loss of her mother when consoling Karen Walker (Megan Mullally) after the death of Rosario (Shelley Morrison). But Thursday’s show brought Grace, with Will in tow, back home to Schenectady, New York, to honor Bobbi’s dying wish: that the entire family celebrate her birthday.

The trip home saw Robert Klein step in as Grace’s father, Martin Adler, as the comedian took over the role from Alan Arkin after he was unable to return for the revival. Returning guest star Sara Rue and Mary McCormack played Grace’s sisters.

The episode, titled “One Job,” kicks off a two-part finale to the revival season of the beloved sitcom that stars the foursome of Messing, McCormack, Mullally and Sean Hayes, who plays Jack McFarland. The revival, a hit for the network amid TV’s reboot frenzy, has already been renewed for two more seasons.

In addition to Alec Baldwin returning as Karen’s lover Malcolm Widmark, the final episode, titled “It’s a Family Affair,” will also welcome back Blythe Danner as Will’s mom, Marilyn Truman. Sydney Pollack, who played Will’s father during the show’s original run, also passed away when the show was off the air in 2008.

“Debbie’s loss was obviously a loss to the whole world,” Messing told THR, “but she played my mom and I felt very close to her and her loss was really, really hard. Especially when we were referencing her in the show.”

Not only was Bobbi’s birthday a central plot point, but several portraits, including an oversized picture in the family room, adorned the house during the dinner table scene with the Adlers and Will, who were all clad in party hats as they laughed, cried and fought their way through the visit. “It was a little bit sad rehearsing because of the big portrait of Debbie on set,” director and producer James Burrows tells THR, referring to the script as “funny and bittersweet.”

Though Mutchnick and Kohan have been paying tribute to Reynolds all year here and there, it was Messing who specifically asked for something more.

“I just said, ‘Please, please. We have to honor her.’ And they did,” says the actress of what the creators and writers came up with. “They wrote the episode and I think it’s beautiful and hilarious. They did right by Debbie.”

The episode also held a personal meaning to Hayes, who told THR that his own mother passed away the night they filmed: “Isn’t that crazy? I say that because of the coincidence of it, and I thought that was really special for me.”

The two-part finale caps off a successful and yet political return for Will & Grace. Right out of the gate, the premiere and its “Make America Gay Again” message took direct aim at the Trump administration and, in the 14 episodes since, there has been no shortage of jokes and jabs aimed at the president and the state of the country. But having the constant thread of Karen as an avid Trump supporter and a March 15 episode that tackled both red and blue hypocrisy — with its ripped-from-the-headlines cake plotline with a twist — has helped infuse some balance. 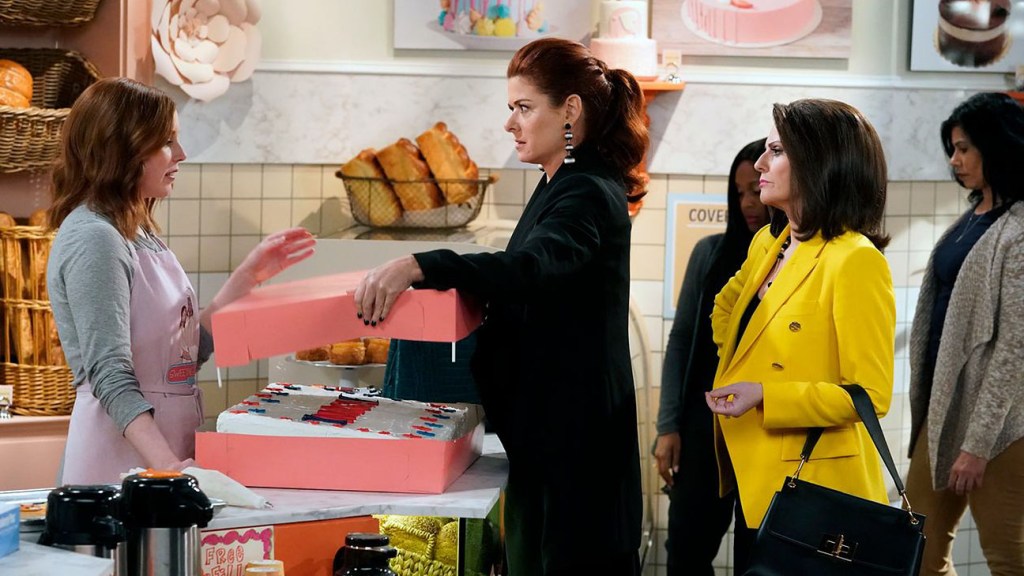 “Everything is political now no matter what you do — being a gay show on network television is a political act,” says Kohan. “Having Meghan Mullally’s character of Karen Walker on this show is a political statement, too. I’m glad that we get a little bit of everything in the series,” Mutchnick adds.

Admits Burrows, “We’re a lot more political than we ever were, but there’s a lot of low-hanging fruit.”

But has the show become too political? Messing and Hayes say it only feels that way because there is so much to address in the current climate.

“This isn’t new. We always pushed the boundaries, we always had very provocative humor,” says Messing, while also agreeing with Burrows. “I feel like we’re doing what we always did, we just have more fodder these days. There’s a lot more happening in our country to talk about.”

Adds Hayes, “The characters in the show are living the same lives as the audience, so anything that affects America at the time or in the world is going to be talked about on the show.”

McCormack, however, took his explanation one step further.

“The first couple years we did the show, Bill Clinton was in office,” the actor explains to THR. “I remember a distinct moment when 9/11 happened and we all looked to Max and David and said, ‘Well, the characters live in New York, what are we going to do?’ And the decision was made that Will & Grace is not the show to try to give some message, so we kept it lighter.”

The actor continues, “I think this time around we thought, ‘We can’t.’ These characters have been living in New York and in this country — they are almost 50. It’s time for them to have a say, and that say needs to be funny as well, but it can’t just be light.”

'Will & Grace' Revival Renewed for Season 2 at NBC

Jean Bentley contributed to this story.