With a career that has spanned more than 50 years, Oscar and Golden Globe wins and iconic performances across the stage and big and small screens, F. Murray Abraham has earned some R&R — but he’s not taking it.

Following a string of recent appearances in film and TV (Homeland, The Good Fight, The Orville, Disney+’s Lady and the Tramp, the third How to Train Your Dragon film), Abraham stars in the new Apple+ comedy Mythic Quest: Raven’s Banquet, from It’s Always Sunny in Philadelphia creators Rob McElhenney and Charlie Day (as well as series writer Megan Ganz), which debuts Friday on the tech giant’s streaming service.

As CW Longbottom, a onetime Nebula Award-winning sci-fi novelist who now serves as the narrative lead on the massively popular (and eponymous) Mythic Quest video game, Abraham serves as chief scene-stealer on the new series, a considerable feat considering the company on the call sheet. Eccentric, often drunk and definitely not politically correct, CW is a unique presence in a show that focuses on the more millennial/Gen X sensibilities of video game development, which is something Abraham is proud of.

The Oscar winner, in a very candid conversation with The Hollywood Reporter, discusses his new role, how the script won him over, honing in on the “flamboyance” of the character and how little interest he has in slowing down anytime soon.

How’d you end up on Mythic Quest?

It’s the nature of the beast. When people offer you scripts when you’re 80 years old, you really do look at them. I’m one of the lucky ones, and I work all the time. This one, it’s nothing but fun, man. Really, because it talks to where I come from. This guy, I don’t feel I know him, but, in fact, off the page, I do know him. I believe what he does and says. He has certain problems, but I, too, like wine. I like women. I don’t mess around, I’ve been married for almost 60 years. Married in Las Vegas, can you imagine? $16. The point is, I like wine, I like women, I love literature and I love to work. I think this guy is representative of a whole generation of older people who are not even able to recognize the concept of retirement. We’re not talking about retiring. We’re talking about the next step and the fact that this show offers a communication between several generations. There are four different generations of actors in this series. I think that’s extraordinary. And they seem to respect each other and like each other. That has a great value these days.

Were you into the show as soon as you read the script?

Absolutely. You can see the writing. It’s fun, he’s an interesting character and he seems genuine. But also, there aren’t many opportunities to play this kind of creature. He’s not a caricature. That’s the trick: To make him as outrageous as he is and still real. I’m thinking about the character in My Favorite Year played by Peter O’Toole [the exuberant actor Alan Swann, a role for which O’Toole was nominated for an Oscar]. That character seems outrageous, but at the same time it’s absolutely believable. Don’t you think?

I’ve never seen it, but I take your word for it.

(Laughs) Thanks for your honesty, man.

CW is one of the zanier characters on Mythic Quest, but he also seems like a real person. You mentioned My Favorite Year. Did you have any other inspirations for this character?

I was into that whole period. I loved the outrageousness of so many people, the flamboyance. I think we’re missing some of that now. Everyone’s playing things so close to the chest. It’s like a television idea that you have to talk low and quiet and not make big gestures. I don’t think that’s true, and in this show I’m allowed — and encouraged — to do that. I think that people should take that opportunity to express themselves and not be afraid. This man is not afraid!

I’m gathering that! CW is a bit of a fish out of water in that he works at a video game studio and doesn’t know much about video games. Is that similar to you? Are you familiar with games?

Well, you know, the stuff from the old days. Pinball machines is where I come from, Pac-Man. It’s much more complex now. It’s much more interesting. Anyway, I’m learning.

Were you familiar with Rob McElhenney’s work in the past and on It’s Always Sunny in Philadelphia?

Oh, that’s a great show! How could you not? Do you know Philly?

Was the opportunity to work with Rob something that weighed into your decision?

Absolutely. We talked on the phone for a while. He’s not only persuasive, he’s honest. He’s legit.

I mean, the idea that you were willing to say that you didn’t know my movie reference, it raises you in my estimation, frankly.

Who’s willing to admit they don’t know what they’re talking about? Good for you, man. 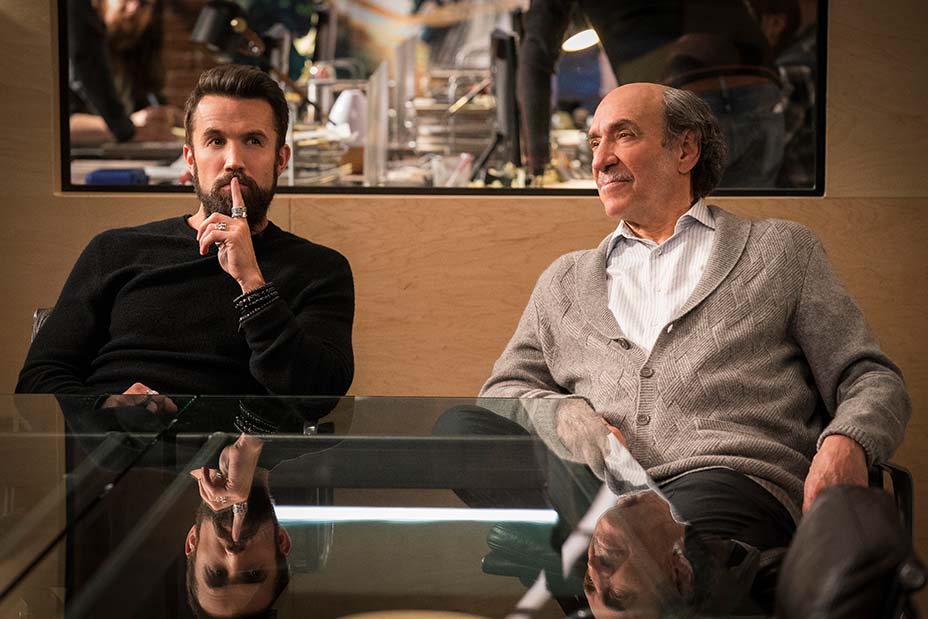 You’ve done quite a bit of TV work in the past few years: Homeland, The Good Wife. What do you look for in a project, and what about TV roles is appealing?

Television has gotten better, for one thing. I love the theater, but you can just do so much of it off-Broadway before you realize you have to do something else. You have to expand. The theater is essential to my life because of the contact, of course, with the audience. It’s me and them. I have to balance it with this new technology, and that I think specifically describes my character’s relationship in this series to people in the 21st century. It’s my insistence on maintaining a relationship with my past and a desire to know something about my future.

Are you familiar with performance capture? Many actors relate it to black box theater. One of your co-stars, Ashly Burch, has done that work in games before. Did you talk to her about it?

No, but I’d really like to know more about it, because I’m a great fan of hers. Tell me what it means.

Basically, they wear Lycra suits on a soundstage and their performance is picked up by technology that captures their movement. That’s how they render the characters in the video games.

You’ve been acting for over five decades and have won an Oscar. What’s it like working with younger actors who are a bit less experienced?

(Laughs) It’s really funny to hear you say “less experienced,” because my experience is about 55 years, but theirs is extensive. I wish you could come on the set and watch them work, because I’m learning so much from them. They’re ready to do it right now. They just walk in and they’ve got it. It’s an extraordinary experience. It’s lightning quick. I come from a place where you have three to four weeks of rehearsal. Even though I’ve done a lot of TV, it’s still a learning process, and it’s admirable.

Any plans to slow down?

No! Slowing down is dead. Give me a break. Fucking retirement? Jump off a cliff! I’m not ready to fucking retire.