It’s no secret that sci-fi and superhero stories are largely the domain of male characters, even in the era of Wonder Woman and the first female Doctor Who.

A new study suggests the gender gap in onscreen representation in superhero and sci-fi films and TV series can have real-world effects on even the youngest consumers of such media. Teenage girls are less likely than boys to describe themselves as confident, brave and listened to, and nearly two-thirds of girls 10-19 say they don’t see enough role models or strong and relatable characters of their own gender onscreen.

The study, titled SuperPowering Girls and conducted by BBC America and the Women’s Media Center, says better onscreen representation can help close the confidence gap for girls and allow them to see themselves as leaders and heroes. It was released Monday on the heels of New York Comic Con and the debut of Jodie Whittaker as the 13th Doctor.

“There’s something sort of elemental to sci-fi [and] fantasy, magic storytelling that just feels really resonant as girls and boys are forming their ideas of who they can be,” Sarah Barnett, general manager and president of BBC America, told The Hollywood Reporter. “I think ultimately the role of a superhero is an expression of power that is very important in shaping boys’ and girls’ ideas of who gets to inhabit the power situation and how. For us, it felt like the right space to explore for the study.” 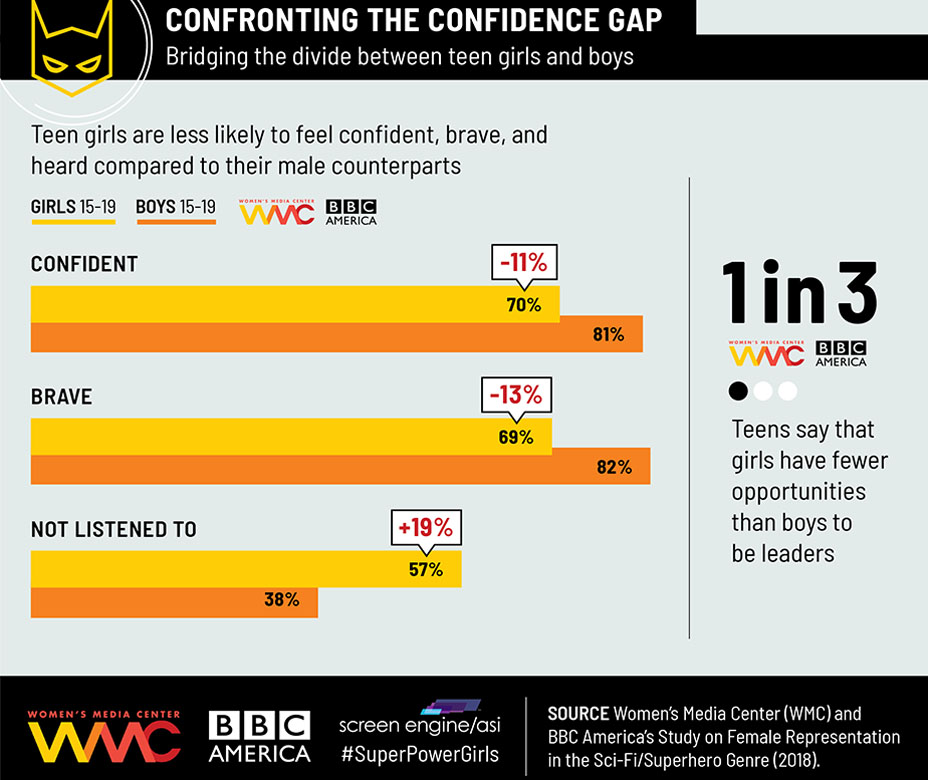 The study notes that while majorities of both boys and girls describe themselves as confident and brave, there’s a significant gap between genders. Most significantly, a majority of girls surveyed — 57 percent — said they’re not listened to (the percentage was even higher among girls of color than their white counterparts), compared to 38 percent of boys.

Just more than a third (34 percent) of teen girls — and almost as many teen boys, 28 percent — said girls have fewer chances than boys to be leaders.

“It was really surprising, for me, the fact that boys as well as girls, teenage boys and girls, both recognized there are fewer opportunities for women and girls,” Women’s Media Center president Julie Burton told THR. “That’s at a young age, and that’s setting the track for their whole future of what they choose and what they think they can be. But the fact that boys were recognizing there’s a gender difference in opportunities is extremely powerful. …

“That was depressing news, but hopeful. The recognition is the first step to trying to make adjustments and change.”

The good news is that images of female heroes can be powerful as well. In the study, three-fourths of girls 10-19 said their favorite female superheroes make them feel strong, brave or inspired. And nearly six in 10 say watching female heroes makes them believe they can do anything — with girls of color more likely to strongly agree with that statement. 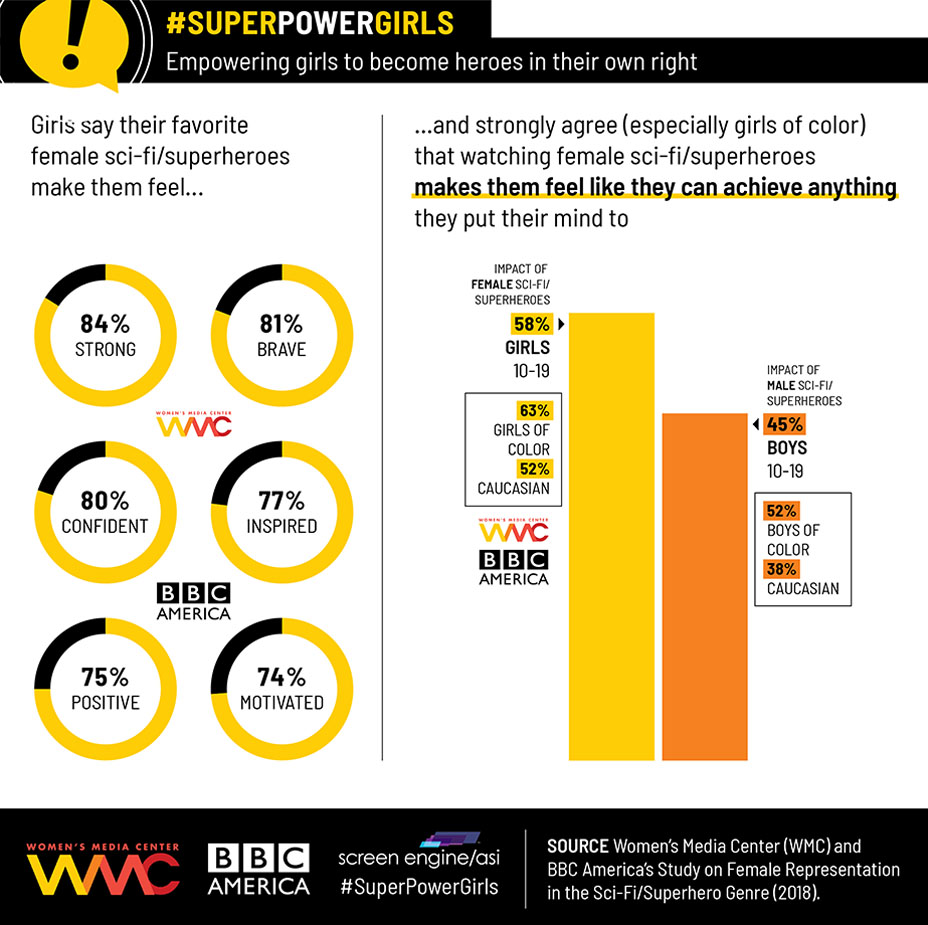 “The biggest takeaway for me from this was first of all that affirmation of ‘if you don’t see it, you can’t be it,'” Barnett said. “If there isn’t representation of women in these roles, young girls and young boys don’t see the opportunity, and boys don’t see women as naturally in these positions of the hero or the one with power.”

That can extend to career paths as well. Boys are much more likely than girls to express interest in STEM careers, perpetuating a gender gap in those fields. Burton argues that representation in media can help close that gap.

Burton also believes better onscreen representation is just good business, a point the study backs up. Not surprisingly, 85 percent of girls 10-19 want to see more women as superheroes and sci-fi protagonists — but so do a large majority of boys (69 percent) and more than 80 percent of parents of kids 5-9, regardless of their children’s gender.

Much of the superhero canon was created by and targeted at men and boys, but Barnett sees the playing field slowly leveling. She said there’s still a ways to go, however, to get to a place where something like BBC America’s breakout series Killing Eve, featuring two complex women characters at its center, becomes the norm in superhero storytelling.

“There have been stories since time immemorial of male heroes saving the world. … Because of that bedrock of the male hero, we can introduce nuance, we can introduce vulnerability, we can introduce darkness, all sorts of twists on what that means,” Barnett said. “Then you look at women in the space of superhero representation, [and] there isn’t yet enough of a bedrock, a foundational solidity of women saving the world. …. There isn’t yet enough of an assumption that women can solidly occupy this position of hero, of being the savior.”

Burton and Barnett hope the study and others like it to come, will help spur the industry to be more inclusive, both in front of and behind the camera, in telling sci-fi and superhero stories.

“We continue to pay attention and encourage stories that are fresh and are representing the lived experience of all of our audiences,” Barnett said. “It’s exciting. I think there are these moments where people collectively start to see things a little differently. It’s not easy, and it’s not quite as quick as some of us would like, but I do think they’re exciting moments, and I think this is one of them.”