On May 17 at 9:30 a.m., WWE executive Stephanie McMahon and her husband, Paul Levesque — better known as the fearsome wrestler Triple H — walked into a conference room on the 44th floor of 21st Century Fox’s Manhattan headquarters. They were there for a pitch meeting with Fox leadership, who were eager to acquire WWE’s programming, which includes the weekly Raw and SmackDown Live.

Both shows have been fixtures on NBCUniversal cable networks, and NBCU was fully expecting to keep things that way with a new 10-year deal worth $360 million, sources tell The Hollywood Reporter. But Peter Rice, chairman and CEO of Fox Networks Group, knew that NBCU’s exclusive negotiating window was due to lapse at 4:59 p.m. ET on May 16. By the end of the meeting, the two sides had shaken hands on a five-year deal for SmackDown worth $1.025 billion.

WrestleMania 38: Where to Watch "Stone Cold" Steve Austin's Return to the Ring Online

How the deal — which is not yet final but expected to close soon — went down says a lot about the importance of wrestling and other live events to network strategy, especially as the Murdoch family prepares to launch “New Fox” after most of its assets are sold to Disney or Comcast. Sports will become an integral piece of the new company, which will include sports cable nets FS1 and FS2 and the Big Ten Network.

A week after Fox’s WWE handshake, rival ESPN closed the second half of a deal with the UFC — a five-year, $150 million annual linear pact that followed another streaming agreement to put 15 mixed martial arts events a year on ESPN+, the Disney-owned network’s nascent OTT service. All told, ESPN will pay UFC $1.5 billion over five years.

At the WWE meeting with Rice were Fox Sports executives Eric Shanks and Larry Jones and Rupert Murdoch, Fox’s 87-year-old patriarch. CEO Lachlan Murdoch joined the meeting on the phone. Along with McMahon, WWE’s chief branding officer, were co-presidents Michelle Wilson and George Barrios as well as CAA’s Nick Khan and Alan Gold, a partner at EMC (the investment advisory part-owned by CAA). When they walked into the conference room, they saw an enormous TV screen projecting a shot from WrestleMania 34, with wrestler Ronda Rousey lifting the 256-pound Triple H in a fireman’s carry. That photo — displayed with the Fox Sports and FS1 logos superimposed on it — served as an icebreaker for a negotiation that would last two and a half hours.

The deal first sparked into life when Rice phoned Khan (repping WWE) weeks earlier and asked to meet immediately should NBCU not exercise an option to retain SmackDown, which averages 2.6 million viewers a week on USA. NBCU had the right to match any offer of $200 million or less per year, but decided not to pursue SmackDown and focus instead on keeping Raw, which averages 3 million viewers and features A-list superstars including John Cena. Fox came in with $205 million, but the company was offering more than cash. The elder Murdoch insisted NBCU was “embarrassed by your product.” Fox, he said, would fully embrace WWE, with SmackDown promos airing across sports programming every night of the week, along with a weekly studio show on FS1. More than that, the deal, Lachlan Murdoch told McMahon during a private call at the end of the meeting, would herald the marriage of the Murdochs and the McMahons, rebel outsiders who had built media empires. (McMahon’s father, Vince, took over WWE from his father in the ’80s.)

That pitch sealed the bargain. Starting in October 2019, Fox will air SmackDown for five years, if the deal closes as expected. NBCU will retain Raw, paying $265 million per year, sources say, with the two deals valued at $2.35 billion over five years — a massive increase from the $130 million per year that NBCU currently pays for both programs. 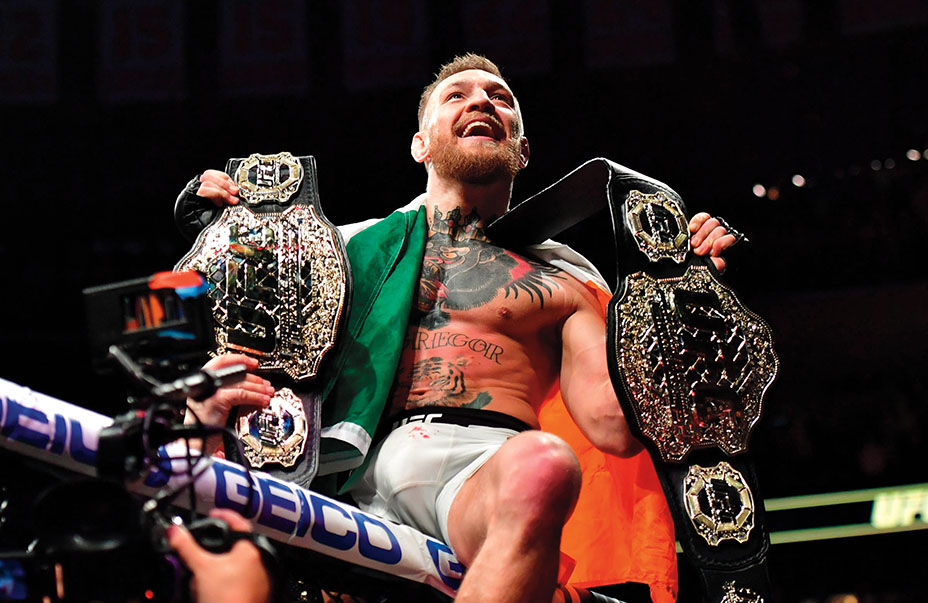 Four days earlier, and a mere two blocks north of Fox headquarters at Radio City Music Hall, Stephanie McMahon, Rousey — recently defected from UFC — and female wrestlers Charlotte Flair and Nia Jax participated in NBC’s annual glitzy upfront presentation. McMahon, 41 and a mother of three daughers. extolled WWE as a bastion of female empowerment and wholesome family entertainment. It was the most prominent placement yet for WWE at NBC’s annual pitch to Madison Avenue buyers. As McMahon spoke, a wrestling ring containing Rousey, Flair and Jax rose from the depths of the Radio City stage.

“We could not sell UFC” at Fox, says a former staffer. “And wrestling is family friendly. If you have wrestling you can find cash. I think it’s a big win for Fox; it’s a great trade-off.”

The deals mark a shift for both companies. ESPN needs to find an audience for its streaming network and stanch loses from cord-cutting. Newly minted ESPN president Jimmy Pitaro noted that his “top priority at ESPN is audience expansion [and] how we can be more relevant to more people, especially the younger generation? The median age for UFC is 35 years old. Combat sports in general are interesting to us. We want ESPN+ to be the destination for combat sports.”

The deals are an enormous markup for WWE and also a significant increase for UFC.

But with sports rights climbing ever higher, is the scramble for rights at networks beset by dwindling appointment viewing sustainable? Fox will finish the 2017-18 television season down double digits among total viewers and the advertiser-coveted adults 18-49 demographic. ESPN’s ratings have fallen with its subscriber base, which is now about 89 million, down from 100 million in 2011. (Technically, WWE is not a sport, since the outcomes are scripted and the performances rehearsed. But like UFC, it is at its core a live-event company with a robust pay-per-view and media rights portfolio.)

“I think that the theory that live entertainment and live sports rights have a ceiling is something media companies want to believe,” says Mark Shapiro, co-president of WME-IMG, which owns UFC. “They want to believe that it’s getting under control, that the leagues are going to get a comeuppance and things are going to level off. It’s not happening. Live sports and live entertainment are more important than ever before. Other television fare just doesn’t offer the same engagement.” 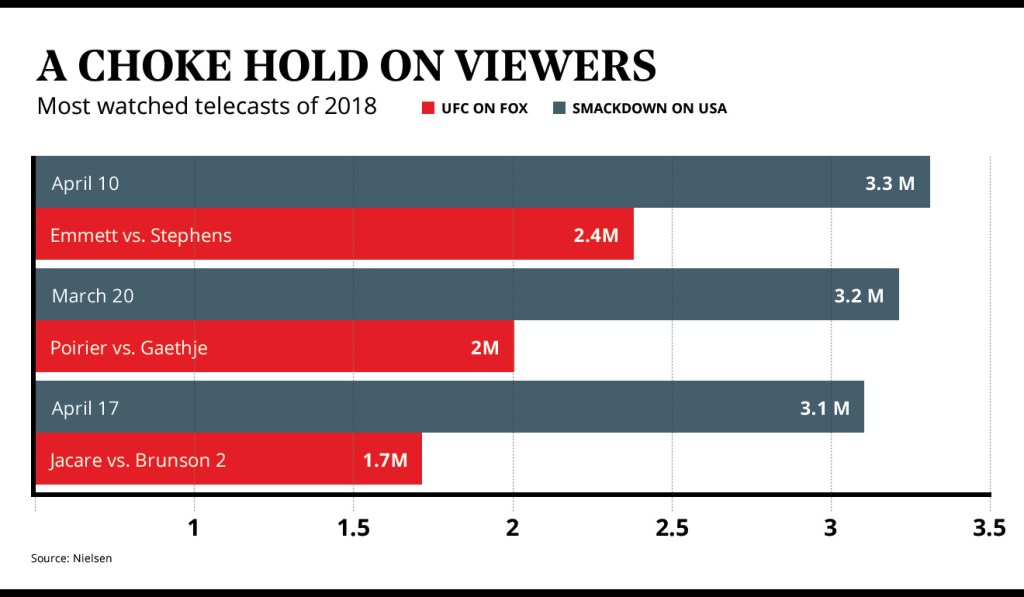