The truth is still out there, and Fox appears determined to find it. Little more than a year after the brief-but-successful return of The X Files, the network has firmed up plans for another limited revival.

Fox announced Thursday that The X-Files will return for the 2017-18 broadcast season with 10 new episodes. Stars David Duchovny and Gillian Anderson are both signed on to reprise their respective roles as FBI agents Fox Mulder and Dana Scully. Creator and executive producer Chris Carter is on board as well. Fox executives have been vocal in their interest to produce more X-Files since last year, but scheduling conflicts held up any official renewal.

“Iconic characters, rich storytelling, bold creators — these are the hallmarks of great TV shows,” FBC president David Madden said in a statement. “And they are some of the reasons why The X-Files has had such a profound impact on millions of fans worldwide. Chris’ creativity, along with the brilliant work of David and Gillian, continue to propel this pop culture phenomenon, and we can’t wait to see what fresh mysteries Mulder and Scully uncover in this next chapter of The X-Files.”

Pricey as the vintage TV property may be, the 20th Century Fox TV production remains a favorite at both the network and the studio. Its revival averaged a 4.8 rating among adults 18-49 and 13.6 million viewers in live-plus-7 ratings, making it the No. 3 scripted show for the season behind Empire and The Big Bang Theory. Fox says an average 16 million viewers watched once multiplatform views were tallied.

When 'The X-Files' Became A-List: An Oral History of Fox's Out-There Success Story

For those keeping track, The X-Files is the clear ratings winner in Fox’s streak of revivals, outpacing both iterations of 24 — the 2015 event series and just-concluded spinoff Legacy — and the current brief stint for Prison Break.

More X-Files will be a much-needed shot in the arm on the drama front. Fox still has Empire, of course, but freshman Lethal Weapon is the only true breakout in its new class. (It has been renewed alongside Star and Lucifer.) The recently departed Bones is expected to be joined by several hourlong series that won’t return to the lineup next year. On the pilot front, options are relatively slim. Two of Fox’s six drama pilots (Neal Baer’s The Beast and Matt Reeves’ The Passage) have been pushed off-cycle. Remaining in contention are its Behind Enemy Lines reboot, a college sexual assault project, an Emily VanCamp medical entry and a Marvel take on X-Men. (Already picked up to series is Seth MacFarlane’s hourlong space dramedy Orville.)

The 2016 run of The X-Files was billed as self-contained, but the choice to end the episodes with a cliffhanger implied that additional episodes were an inevitability. It certainly helps matters that Duchovny’s latest full-time gig, NBC drama Aquarius, has since been canceled. Anderson, however, still has British import The Fall and Starz’s upcoming American Gods adaptation.

Production for the new X-Files episodes is set to begin this summer. In the meantime, there’s this new teaser art, below. 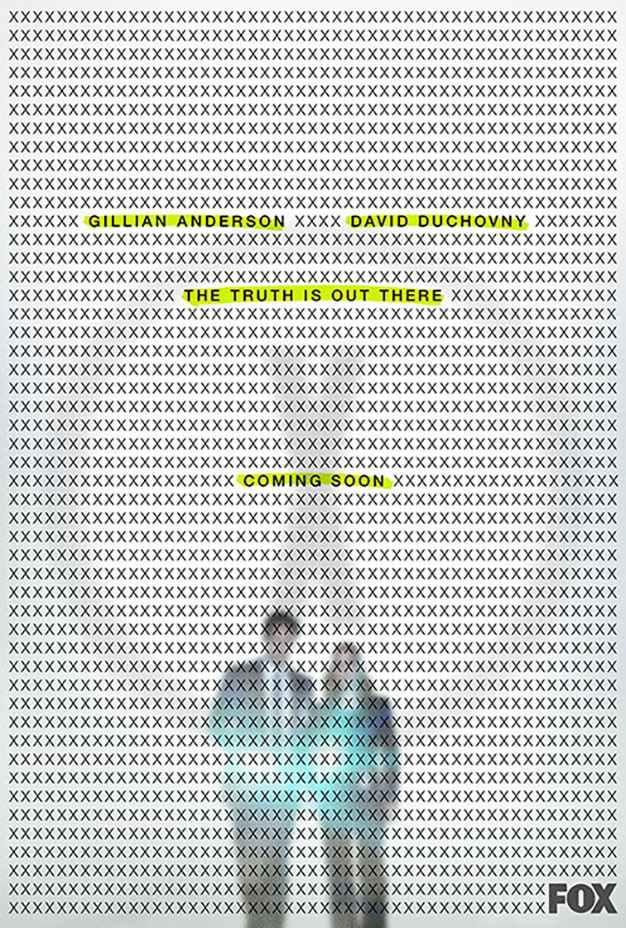