[This story contains spoilers from the season 11 finale of Fox’s The X-Files.]

At first glance, it almost looked like Mulder (David Duchovny) and Scully (Gillian Anderson) got a (relatively) happy ending during Wednesday’s season — or possibly series — finale of Fox’s The X-Files.

Although they suffered brutal losses — the X-Files were shut down (again), Scully’s son William (Miles Robbins) was presumed dead and Skinner (Mitch Pileggi) may, too, be dead — Scully surprised Mulder with one big win: she was pregnant.

Viewers will recall that the long-running Fox drama ended with a Scully pregnancy in season seven, at a time when the show’s fate was also up in the air. (It would return to the network for two more seasons in its original run, though Duchovny was not a series regular in either of those.) At the time, the pregnancy came after Mulder and Scully slept together for the first time; viewers would learn the following season that Scully actively pursued a pregnancy with Mulder via in vitro fertilization, but it didn’t take. (Of course, season 11 recontextualized William’s conception with the reveal that Scully was actually medically impregnated by William B. Davis’ Cigarette Smoking Man without her consent.) Given how much the two seasons of revival have focused on the absence of, search for and eventual reunion with William, Scully’s pregnancy could be a full-circle moment. 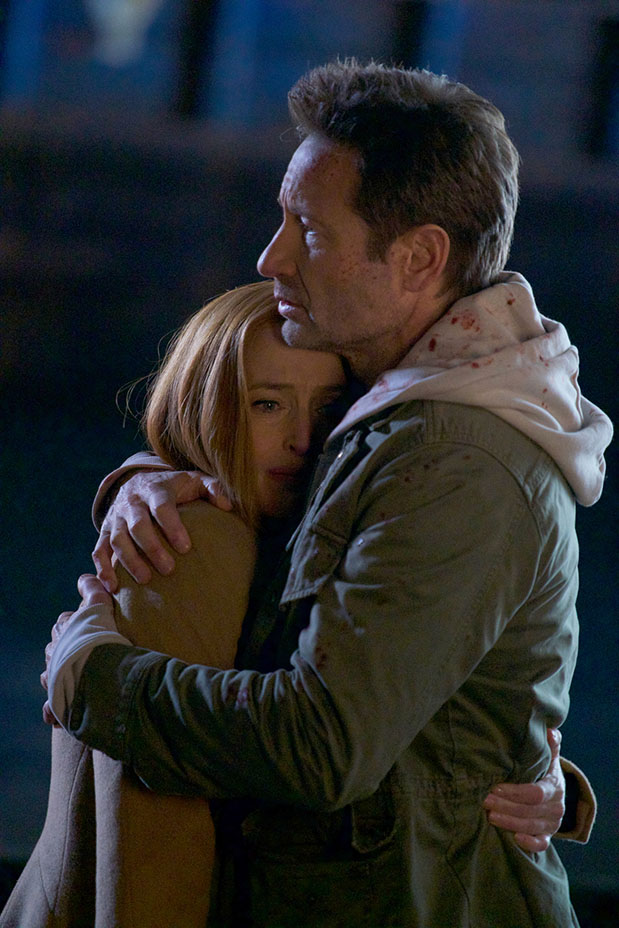 That said, series creator Chris Carter has never shied away from open-ended finales. The original series finale in 2002 featured Mulder and Scully on the run, together, but with the threat of a looming 2012 alien invasion hanging over them. (The revival series barely touched on the fallout of that not happening.) In fact, the closest thing the series has had to a true happy ending was at the end of season eight — with the show’s fate again up in the air — as Mulder and Scully embraced, with baby William cradled between them. This almost seems too clean. So, if Fox opts to bring the show back, should Wednesday’s finale ending be trusted?

One key thing to note in Wednesday’s finale is that at the midway point of the episode, Scully and William have a shared vision of a  potential future … and there is a close-up of Scully’s eye. On most shows, that would be a stylistic choice, but on The X-Files, that decision has alarming potential. There was a similar close-up of Scully’s eye in the season 10 finale, and the season 11 premiere revealed that everything after that shot was just her premonition. If — and this is, admittedly, still an if — the same holds true here, Mulder and William never reunite, Erika (Barbara Hershey) and her goons are alive, Monica (Annabeth Gish) hasn’t been killed, Skinner wasn’t run over, CSM never shot William (thinking it was Mulder), Mulder never shoots CSM, and Scully doesn’t tell Mulder she’s pregnant. (Although, presumably, Scully would remain pregnant.) The entire second half of the episode would essentially be erased.

If the show goes down that route, it would be mostly repeating its own twist — but it would also allow producers enough wiggle room to figure out how the franchise exists in a world without Scully. (Anderson has said this is the final season she’s doing of the show.) Carter side-stepped answering whether the second half of the episode was another premonition while speaking with The Hollywood Reporter about the episode. “That’s why they call them cliffhangers. I can’t imagine the show won’t come back in some shape or form. Certainly you’re going to see an answer to the question that’s posed.” (He also declared it would be “revealing way too much” to indicate what his hopes for Mulder/Scully were going forward after their last scene.)

A big remaining uncertainty is whether Duchovny would return to the franchise. If he’s back and Anderson isn’t, the show could, in theory, have Scully suffer the effects of a prolonged premonition. (Her brain was on fire in the season 11 premiere and she collapsed multiple times; presumably another episode like that would be equally dangerous.)

It would be an disservice to the series and Scully’s legacy to permanently take her out of the equation — but, presumably, something (hopefully temporary) would have to be done to explain the character’s absence. When Duchovny downgraded his involvement in season eight, Mulder was abducted by aliens. The writers had him leave Scully and their newborn to go on the run in season nine to explain Duchovny’s almost-entire absence for the year. But that was nearly 17 years ago. It’s hard to imagine what it would take for Mulder and Scully to not be a part of each other’s lives … especially with her carrying his child. If Scully were, say, hospitalized, but CSM were out there trying to end the world and William were on the run, you could understand why Mulder would be out there continuing to fight.

If Duchovny doesn’t return, the field is a bit more open. They could stick with the ending, and then attempt to reopen the X-Files with different agents (a la what Fox did with 24 and its recent Kiefer Sutherland-free revival). And with William still navigating his powers, he also could be a wild card: would the show want to follow him as he attempts to handle his abilities?

There are even more possibilities if Anderson does opt to return to the series. The series could stick with the apparent ending (either showcasing the pregnancy or jumping forward to Mulder, Scully, plus their kid, which viewers never previously experienced) or it could have the second half of the episode be a premonition. As we saw with last season’s premonition, because Scully knew it was coming and made steps to change things, very little of what we saw came true. This time around, what would change?

Did 'The X-Files' Just Kill Off a Fan Favorite?

Of course it’s also worth noting that Carter has said he did not envision Wednesday’s episode as a series finale and that the future of the franchise remains to be determined as its studio — 20th Century Fox Television — would be among the assets going to Disney should regulators approve the $52.4 billion sale. That would make The X-Files a Disney franchise and leave a new ownership to control the the future of the series.

Do you want there to be an X-Files season 12? If so, what do you want to see happen?