After the panel, Shahidi and Reid (who also stars in Leigh Whannell’s The Invisible Man, due out Feb. 28) each sat down with The Hollywood Reporter to talk further about social issues, politics (including the controversy over former President Barack Obama’s comments on call-out culture that he made while Shahidi interviewed him last Tuesday) and their latest projects.

Shahidi (who attends Harvard with Malia Obama) interviewed former President Obama at the Obama Foundation summit in Chicago last Tuesday, during which the former president made comments about the “woke” movement and social media call-out culture that have since been criticized.

He said: “This idea of purity and you’re never compromised and you’re always politically woke and all that stuff, you should get over that quickly. The world is messy. There are ambiguities. People who do really good stuff have flaws. … I do get a sense sometimes now among certain young people, and this is accelerated by social media, there is this sense sometimes of, ‘The way of me making change is to be as judgmental as possible about other people.’ And that’s not enough. Like, if I tweet or a hashtag about how you didn’t do something right or used the wrong verb, then I can sit back and feel pretty good about myself. ‘Man you see how woke I was, I called you out.’ That’s not activism. That’s not bringing about change. If all you’re doing is casting stones, you’re probably not going to get that far. That’s easy to do.”

In response to the controversy, Shahidi told THR: “Being that I was part of the 75-minute conversation that preceded it and then followed it, it really was a moment in which I feel like people chose two sentences of what was said. There is something to be said for the importance of accountability. But I think accountability culture is different than call-out culture.”

She continued: “There’s one thing to be doing something as a force of action and realizing that me being a part of a mass online movement does something, and then there’s still a tendency that we have to acknowledge to criticize people with no sort of solution in mind and to be overly nitpicky with no metric for growth of what we expect in return. And so, I think he addressed the nuance. Really, his comments to me were about the importance of action. Action can look different for everybody, but really acknowledging, ‘When are you taking action and when are you content just identifying the problem?’”

A Glimpse of Yesterday Honored to share space with such incredible thought leaders at the 2019 Obama Summit and grateful for the opportunity to be in conversation with President @barackobama and leaders De’ Andre Brown, Samira Koujok, Mimi Gonzalez, and Francisca Mbuli we talked everything from tattoos to the importance of our global community and investing in the communities that shape us #ObamaSummit

During a discussion about legacy heroes, Hirsi pointed to 75-year-old political activist Angela Davis; Abdullah named 76-year-old prison activist and former Black Panther Party chairwoman Elaine Brown; Shahidi nodded to the novelist and activist James Baldwin; and Reid shouted out her grandmother, “who was arrested multiple times in Greensboro, North Carolina for protesting, and I feel like she instilled that fight and that fire in my mother, who has always told me to not only stand up for myself but to stand up for people around me,” adding, “I feel like that’s carried on into my career and my purpose.”

Of her Eighteen x 18 organization, designed to encourage young people to vote and become politically involved, Shahidi told THR that she will be announcing details about the second #WeVoteNext Summit in the next two weeks. The organization is also “planning local events and figuring out how to support young people doing great local work this coming year,” she said.

Together with her mother Robyn Simpson, Reid created the Instagram page Bamazing, dedicated to empowering young people, particularly those affected by bullying and cyberbullying, “through positive self-declarations and knowing that you don’t have to be perfect,” she explained during the panel. “You can be perfectly imperfect and you can be amazing, even though you do make mistakes and you do have flaws and you are going to have bad days throughout your life, but it doesn’t define you. … It’s all about spreading joy. It’s really simple.”

On the 2020 Presidential Race

While speaking to THR, neither Reid or Shahidi would identify their favored candidates, but Shahidi emphasized the importance of staying in dialogue with her peers to avoid being a “one-platform voter.” She also voiced the qualities that she is looking for: “It’s really important to figure out which candidates have continued to evolve with what the current mindset is and what is expected in terms of what we should be giving all communities. And for us, as a community, to acknowledge, when we’re looking for people with long political records, what are we looking for in terms of change and growth? Like, what signifies growth to us? Because it’s really hard to identify.” As for key issues, while Reid is not yet old enough to vote, she listed “the school-to-prison pipeline and police brutality and immigration.”

On the Meaning of Shahidi’s ’63 Tattoo & “Unite” Socks

During the group talk, Shahidi revealed the significance of the ’63 tattoo that she got in January: “There were many years in which change was created, but in 1963 everything from the bombing of the Birmingham church to the assassination of [civil rights leader] Medgar Evers happened to the March on Washington and freedom movements. James Baldwin writes The Fire Next Time and because of Evers’ assassination he comes home from Paris. So not only does it represent what it means to be so closely knit together with your brothers and sisters, both figuratively and physically, but also this idea of consistently working towards a future that you weren’t necessarily guaranteed but still deemed essential.”

As for the new limited-edition socks emblazoned with the word “unite” that she created last month for Bombas, Shahidi told THR: “The collection is an homage to all the young people who are really doing incredible work and, more than that, are hyper-aware of our dependence on each other. … I think ‘unite’ has been a signifier of how we build community and how we acknowledge and celebrate our differences. Rather than say, “Oh, in spite of our differences, we’ve come together,’ but ‘Because of them, we’ve intentionally chosen to be together.’” 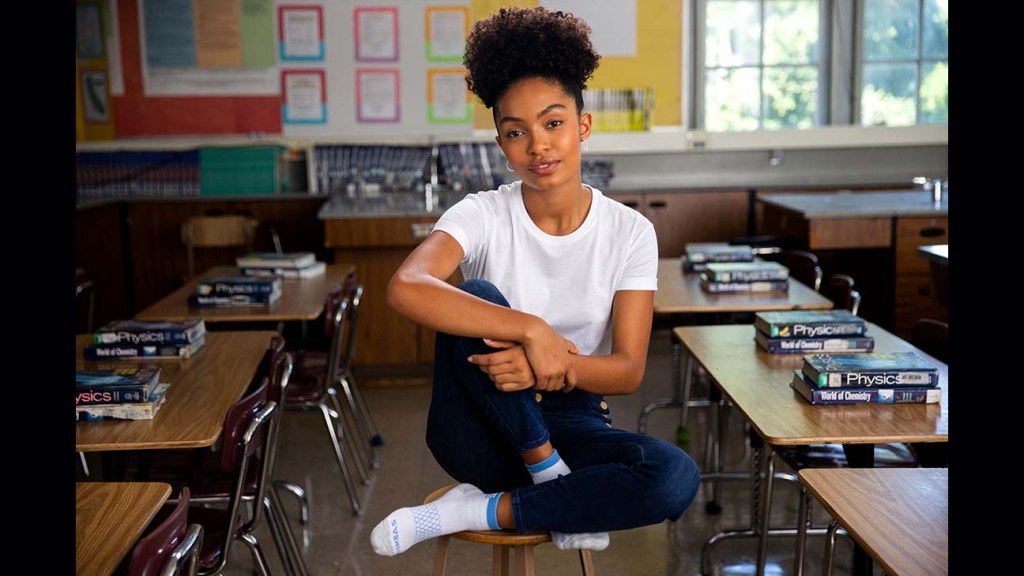 On the Meaning of Reid’s Production Company Name

Asked by THR about the significance of the name, Seed & Wings, of the production company that she runs with her mother and sister, Reid responded “Aerodynamically, butterflies aren’t supposed to fly. But they don’t know that, so they fly anyway. And as part of my faith (I was talking about that onstage), there’s a Bible scripture that says, ‘If you have faith the size of a mustard seed, God will move mountains’ So we implemented those two [things] to make the name.”

“I’ve always described my future as policy-adjacent,” Shahidi told THR. “I don’t know if there’s any running for office. But what I have been inspired by is I’ve been intentionally reading about the importance of social research. … And so looking at the impact of social research as informing policy is something that’s been really interesting to me, because there’s also been a long trend of corrupt social research informing how we create policy. And so I think something in that space could be possibly interesting.”

Reid answered a question about her political aspirations with a hard “no” but similarly feels that she can make a difference through her projects and films. “I feel like the work I’m doing will be impactful enough where I don’t have to be in politics,” she told THR. “I try to align myself with purposeful projects.” That said, she shared that Seed & Wings has nearly completed development on a new project. “It’s a coming of age project in the YA space talking about the school-to-prison pipeline and how young girls, specifically young black girls, are being pushed out of school rather than helped,” she said. “I can’t wait to see that come to life! We’ve been working on that for a while now, so people should be hearing about it soon.”

Hirsi had presidential aspirations, but quickly changed her mind after spending two weeks shadowing her Congresswoman mother on Capitol Hill. “Every day, I did pretty much every single thing she did. Being on the floor and in caucus was super weird, because some members will throw shade at others in front of their face or they’ll mention how you tweeted something and how they didn’t like it or they’ll make jokes,” she said. “And I thought that would be a problem you’d have in second grade, not in Congress! I was expecting these people to be grown and to be taking their jobs super seriously because our country is in their hands. … But they were all like chilling and talking, gossiping, just chillaxing …I thought, yeah, this is too much of a stressful job and too kindergarten-esque for me to partake in.”

And then there was the dress code. “I don’t think Congress is like a bad job, but I just think not all members take their jobs super seriously; it’s just what I noticed,” Hirsi continued. “And also I think business casual’s, like, unnecessary. I wore yellow corduroy jeans one day to the floor and I looked really funny because everybody else was wearing suits, but I was like, you know, I shouldn’t have to change for Congress.”

Maybe it was the prom that was the last straw: “When I was on the floor, they were having a freshman prom and a senior member was handing out flyers of his face and AOC’s face, inviting people to the prom,” she added. “And I was like, this is super weird. I’m in high school and I wouldn’t be going to my prom. Why are they having a prom? …It’s like high school times 10. Congress is not that bad. I promise it’s not that bad. There are some really good members out there. It’s just weird!”

your black muslim family is in the House!