[This story contains spoilers from the season two finale of Netflix’s You.]

Has Joe Goldberg found his match? The second season of Lifetime-turned-Netflix drama You saw Penn Badgley’s stalker/murderer/bookseller obsess over and fall in love with a Los Angeles chef named Love (Victoria Pedretti) — who turned out to have a dark side nearly as big as his own.

Love confesses to Joe in the penultimate episode that not only does she know about Joe’s past (the murder, specifically), but that she has also killed for love herself (love of her twin brother, and love of Joe).

Showrunner and co-creator Sera Gamble spoke with The Hollywood Reporter about the season’s biggest twists, including the return of Joe’s ex-girlfriend Candace (Ambyr Childers), setting up a potential season three, and how long she pictures the show running.

The Love twist isn’t something that came from the source material book. What was the genesis of that idea?

We knew we needed to have some kind of big revelation about that character that would snap into focus everything that you’ve learned about her all season, and that would particularly hinge on Joe’s blind spots toward women he loves or is obsessed with. We knew that was the operating principle of the story. And then the process, the genesis of that idea springs from this philosophy we have in the writers room, which is kind of a fun one: The rule is that character needs to be recognizably human and the emotional journey to be grounded, but the plot can go just as fucking crazy as the writer can figure it out. You can go wild! So really, we all have propensity when we’re talking about these major plot points in the book to push each other to ask what would happen if this went further? Or what would happen if somebody didn’t get saved? Or what would happen if something much worse happened to Joe in this moment?

In the book, Love finds out who Joe really is and surprisingly she is not totally repulsed. So that exists in the character. We just started from that place and the conversation was about how there’s the person that Joe would think is his perfect woman, and then there’s somebody who actually would be compatible with Joe. And because Joe cannot accept who he really is — I mean, that’s the thing that Candace says to him at the beginning of the season. She’s going to show him who he really is and that will cause a lot of suffering. Because of that, the ultimate terrible mirror would be for a woman to truly love him but be capable of the same kind of darkness and violence that he is. We just thought it was a perfect paradox to trap the character in. 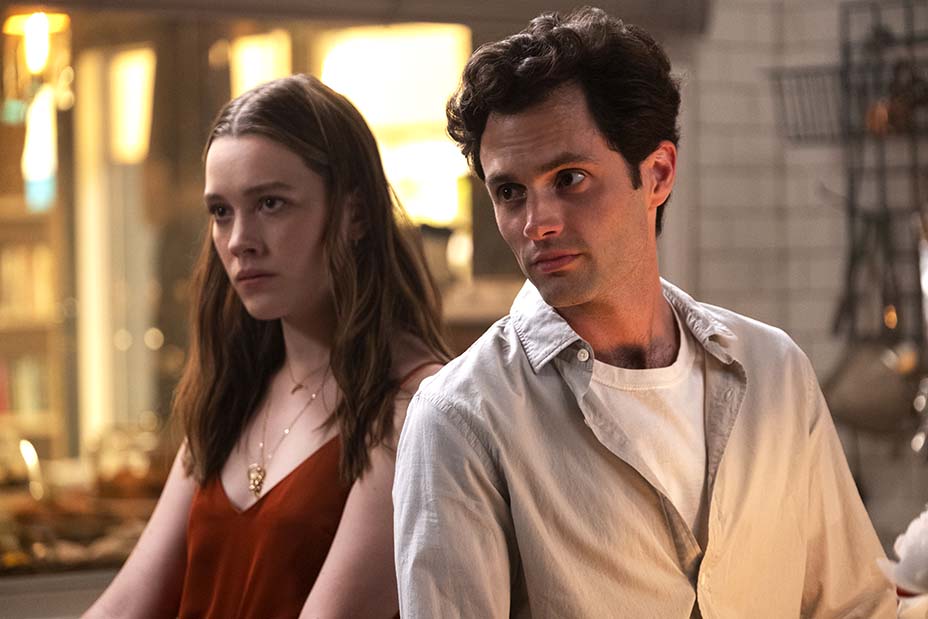 At the very end of the finale, Joe and a pregnant Love are in the suburbs seemingly starting a new life together — but Joe is already obsessing over their new neighbor. What are you envisioning for a potential third season?

Our fingers are crossed that we get to keep telling the story. We don’t have any kind of official pickup or anything. I will say that when we originally sold the show, we very broadly described it as each season would be a new love obsession and a new world. Season one is Beck in New York, and season two is Love in L.A., and so we are evoking where we would like to go, which is to a much more suburban, insular world where Joe would be a complete fish out of water. And now Love occupies a very different place because she is the mother of his child but also not the woman he thought she was. I think to me, the most important thing about that last scene is just it is confirmation that Joe is still Joe in a way that’s not going to be great for Joe. That he has not learned that he cannot just keep looking for the next person to attach his hopes and dreams to that way. It seems clear that he’s falling into some version of that same pattern. I can’t say that we know exactly what a season three would be, but I can say things won’t go well for Joe.

Do you have a grand plan for the series? How many seasons do you envision it running?

I never like to jinx things by being too specific one way or the other. I will say that we have a lot of stories still to tell. I am not scared at all of saying that we definitely could follow Joe for several more seasons. That being said, it’s a tough TV landscape right now. There’s about 10 billion TV shows and orders are shorter and there’s more competition, so we never really save anything for later seasons. Our rule of thumb is always just if we have a great idea we’re going to give it to you right now. Because we believe in the world that Caroline [Kepnes, who wrote the books on which the series is based] gave us and we believe in these characters, we just know they’ll keep finding really fucked up shit to get into.

Of those 10 billion TV shows, your co-creator, Greg Berlanti, is producing more than 20, and you have your second, the fifth season of Syfy’s The Magicians, premiering within a month of each other.

We’re all really busy! Look, I’m not complaining. It’s gotten so much better for the creative side than it was when I got into this business. It’s so exhilarating. You can tell stories that people used to say you definitely could never sell, including probably this one. So I’ll take it any day of the week. I don’t mind the competition. I don’t mind how hard we all have to work. This is the absolute golden era, I think, for writers. I don’t take any of that for granted at all.

Were you worried about making Candace seem like a psycho versus what she really is, which is someone who was deeply hurt by Joe and almost murdered by him?

That’s exactly what we had in mind as we were writing her. To be very serious about it for a minute, the current version of the #MeToo movement really exploded when we were in post-production for episode one of the show. The Harvey Weinstein story broke while we were in post. We actually inserted a Harvey Weinstein joke into a text because it was happening as we were finishing up that episode. So this story is obviously very much about those things. But Caroline wrote it years ago, because this explosion of the #MeToo movement didn’t invent these problems. It’s just trying to make them a conversation.

Lifetime's 'You' Is Tailor-Made for the #MeToo Era

One way that has been helpful is that the conversation in making the show [has been] really intense about what we’re actually looking at in our culture and what we’re trying to say. One of the things that has been most troubling to me in watching women come forward to tell their stories is this terrible sinking feeling I have that inevitably there will be a follow-up article talking about how she was difficult and crazy, and someone will dismiss her. It really does make people dismiss women’s stories as being, like, a little wrong in the head or vengeful or vindictive or somebody who was disappointed by something she didn’t get, and somehow this eradicates truth when it comes from a woman who claims that something bad has happened to her. I feel that deeply. It’s one of the most frustrating things in the universe as far as the writers of the show are concerned. So what we talked about was how objectively Candace is the hero of the story. She was brutalized by a bad man and the system won’t help her, so she has to take it upon herself. She is objectively a superhero, but because we’re telling the story from Joe’s POV, he has this incredible nuclear power in his pocket, which is that he can say “that is my crazy ex-girlfriend.” And as soon as he says that, “She’s crazy and she’s stalking me,” suddenly no one will listen to her. We’re trying to capture the frustration of that. 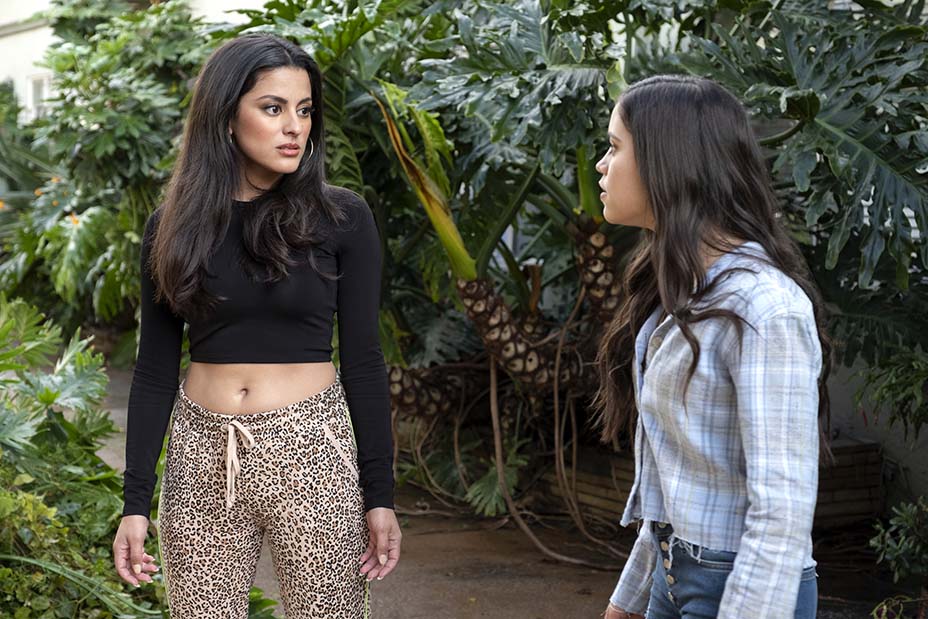 You had Elizabeth Lail return as Beck periodically throughout the season, but you also brought John Stamos as Dr. Nicky back too. Joe framed him for Beck’s murder, but Nicky tells Love’s brother, Forty (James Scully), that he’s made peace with his fate.

We wanted to see John’s character again and had a long conversation about what the most fun way we could bring him back would be, knowing that he was in prison. We cycled through a lot of ideas, but ultimately we liked this one both because it’s just a fun sharp turn for the character, but also because it’s essentially a horror scene from Forty’s point of view. He is both having his worst fears confirmed and then also hitting this ridiculous dead end in Dr. Nicky’s attitude, which he’s taken on because there continues to be something fundamentally very selfish about Dr. Nicky, very self-protective. So he’s picked up a new shield between him and having to do anything about what’s happening. It’s funny, but it’s horrific at the same time.

'You' on Netflix: The Ultimate Season 2 Primer

Joe and Love are starting a new life together, but could some more characters return for a potential third season? Namely, Joe’s young neighbor Ellie (Jenna Ortega) or Love’s friends?

First of all, I don’t see why not. Part of the fun of Joe is that he is not very good at doing bad things. He doesn’t plan them well. He doesn’t execute them perfectly like a mastermind. And so there is always the worry that things from his past are going to catch up with him. What’s great about that is it creates a landscape for the show where you do get to revisit your favorite characters moving forward. Ellie is still in Joe’s life. He’s sending her money. She hates him, but he is sending her money. So that door remains open for us. And as you saw in season two, I mean Beck was dead and she came back. One of my favorite things to do is bring back a dead person to haunt you. So the door is wide open for everybody’s favorite characters.

You season two is now streaming on Netflix.