[Warning: This story contains spoilers from the season three finale of Younger, “A Book Fair to Remember / Get Real.”]

Liza finally spilled her secret to another important person in her life, dangling the moment Younger viewers have been waiting for by a cliffhanger-of-a-thread in the final moments of Wednesday’s finale.

The double-episode ending to season three of Darren Star’s TV Land series played out like a super-sized rollercoaster. Liza (Sutton Foster) ruins her own marriage proposal when Josh (Nico Tortorella) catches her kissing her boss Charles (Peter Hermann). After a season of questioning their future, Liza realizes she loves Josh despite their age difference and begs for his forgiveness. But heartbroken Josh replies to Liza’s teary apology with stinging words: “You’re a liar and a cheater and whether you realize it or not, your lies are hurting everyone around you.”

Josh’s rejection sends Liza into a spiral of inner reflection, spurring her to finally come clean to Kelsey (Hilary Duff) about her double life. Though Liza cops to being 40, not 26, and having a daughter, viewers will have to wait until season four to find out if Liza just lost another person in her life over her lies.

“Liza’s secret is going to be a part of her life, but it doesn’t define the show forever,” creator Star tells The Hollywood Reporter about the finale signaling a shift in the series, which was renewed for a fourth season in June. “Telling Kelsey is the one thing she can do to redeem herself.”

Talking with THR, Star discusses his plan for Younger as Liza’s secret becomes more and more exposed. He also says Liza and Josh’s love story isn’t over and imagines how the New York-set show will reflect a post-election climate when it returns in 2017.

Younger started with Liza keeping this big secret. Now, after three seasons, she makes a big confession and Kelsey joins the characters who are in the know. How does the finale impact the show’s longevity?

From the beginning, I always think of Younger as an inter-generational romance and part of that is building an ensemble of characters that you’re going to want to follow. I don’t know that it was necessarily a plan in terms of how many seasons it would take to get here, and there still may be people that she holds her secret from for a very long time for a number of reasons. It’s a part of the show, but the show is bigger than being about a woman lying about her age. We’ve moved beyond that and are now exploring this really wonderful ensemble of characters and what it means to get older and, what is ageism? And a lot of things.

How many seasons do you envision Younger going?

They’re short seasons, so I do think it’s a show that can sustain a good number of seasons. These are 12-episode seasons. I think what it comes down to is you have characters that people are really invested in and care about, so it’s really as long as everybody wants to do it and that the network is happy. I don’t have a specific number in mind.

How will the finale spring Younger into a new phase?

It opens up new possibilities. Even at the end of the season, we don’t know what exactly Liza said to Kelsey and we don’t know how Kelsey is going to react, but I do feel like it’s going to be a springboard to other stories.

As Josh said in the finale: Liza is a cheater and a liar. Where does Liza lie on the “likable” scale and will we now see her being punished for her actions?

A small lie can always develop into a big lie. She got herself into a deeper situation with the emotional connections that she’s made to the people she’s been lying to and that wasn’t something she anticipated. The longer the lie continues and the bigger ramifications there are, the harder it is to get out of.

Before she messed things up with both of them, this season centered around the love triangle between Liza and Josh and Charles. Is the door closed on those two relationships?

I would not say that. I would say there are further complications and more obstacles.

Is there still hope for Liza and Josh?

Those characters have an incredible connection and the actors have such fantastic chemistry, She’s definitely hurt him tremendously, unintentionally. So I guess the question is, how does that relationship proceed? That’s what we’ll be thinking about next season. 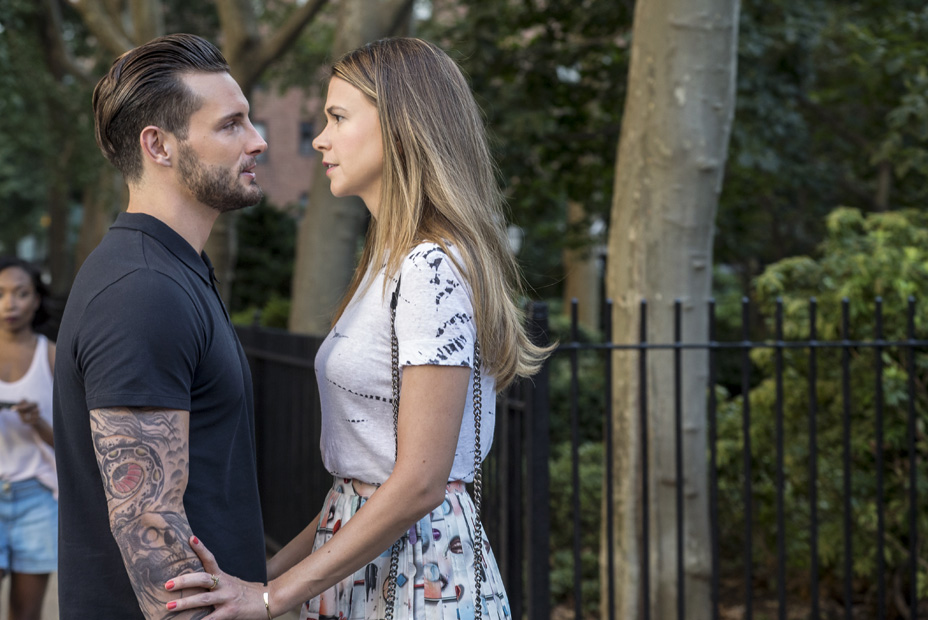 Could Liza even handle losing Josh and Kelsey in one swoop?

Right. It’s a pretty tough thing to follow for Kelsey, and it’s also an important step for Liza to be truthful for her. In a way, it was her one shot at redemption for herself. But how Kelsey processes it is another story.

Will season four be one of redemption for Liza?

We always try to keep an eye on why Liza’s lying and the work aspect is important to her, so it’s always going to play a part in the show in terms of: What role does her job play in all of this? And her career and what she wants, and how important having that career is to her. She’s juggling a lot of balls, but it gets down to focusing on why she did this initially and then trying to protect the relationships she has. She doesn’t want to lose the relationships that she’s made.

“Millennial” has given you the freedom to insert more storylines based in reality. Younger isn’t a political TV show, but have you given thought on whether you will tackle the current post-election climate?

It’s something that I’m certainly still digesting, so I don’t know how it’s going to work its way to storylines. When you’re doing shows that are trying to reflect the world, you don’t want to live in a vacuum and it’s certainly something that’s happening. And what that impact is and how to reflect it is, I think, a question mark right now. I don’t think the show’s ever going to become political. It’s not that kind of show, even though it can poke fun at a lot of different topics. We did an episode about a male feminist and really satirized that character who was writing a book that male feminists would satirize, about a man who had such empathy for women that he actually wanted to breastfeed. As long as there’s a great sense of humor to it, we can do anything we want.

Sex and the City [created by Star] aired in the winter after 9/11. It wasn’t a political show, but it was about New York and found ways to address what everyone was feeling at the time. Could that model work for Younger?

I think [Donald] Trump is a condition of our country and New York, so how are we going to reflect that in the show is a good question, because we’re doing a show that takes place in New York. We hope to let a recognizable reality come into the show. But it’s going to be more about what the characters are feeling about their lives, more than anything overtly political.

Coming off an election cycle that was supposed to solidify this being the year for women, how important is it now to tell stories that are empowering to women?

I think it’s more important now, in a way. We have an opportunity now because any political or media figure writes a book. So as far as I’m concerned, they’re all subjects for storylines for us. We definitely have a lot of material out there, now more than ever.

Younger returns in 2017 on TV Land. What did you think of the finale? Share your thoughts with THR in the comments below.