Zendaya may be recognized as a successful actress-model-singer, but now she can add another accomplishment to her résumé: fashion designer. The Greatest Showman star presented her first collection with Tommy Hilfiger to an audience including Janelle Monae, Tyra Banks, Yara Shahidi, Gigi Hadid, Carine Roitfeld and Lewis Hamilton.

The show kicked off with a disco dance party and ended with Grace Jones strutting down the stage.

This Tommy x Zendaya collection paid homage to the Battle of Versailles Fashion Show, the famous face-off between French designers such as Christian Dior and Yves Saint Laurent and their upstart American counterparts including Anne Klein and Oscar de la Renta back in 1973.

Versailles turned out to be a seminal moment in sartorial history, with the Americans taking the crown using 11 black models who stole the show and set the stage for the future of fashion. Some of those famous faces turned out in force Saturday night, with Beverly Johnson, Beverly Peele, Pat Cleveland and Veronica Webb strutting alongside their current counterparts Winnie Harlow and Jourdan Dunn.

“I was inspired by these incredible women,” Zendaya told The Hollywood Reporter backstage before the show. “It was a turning point in the industry and the point where black women were finally seen. In some ways, it’s why all of these beautiful young girls are here now, and we wanted to pay tribute to these iconic women.

“Without them, we wouldn’t be here, without them taking those steps and opening those doors, so it’s about honoring them and appreciating them as well,” she continued. “And we’re just having fun!”

Fun — and frenzied — it was, with a roller derby disco taking place on a lit-up stage before the show. Dancers grooved to Diana Ross and Donna Summer, as if Studio 54 had been transported to the Seine.

Hadid came backstage to congratulate her successor just before the show. “You’re gonna be amazing, you don’t need luck,” Hadid said as the two embraced in a hug. 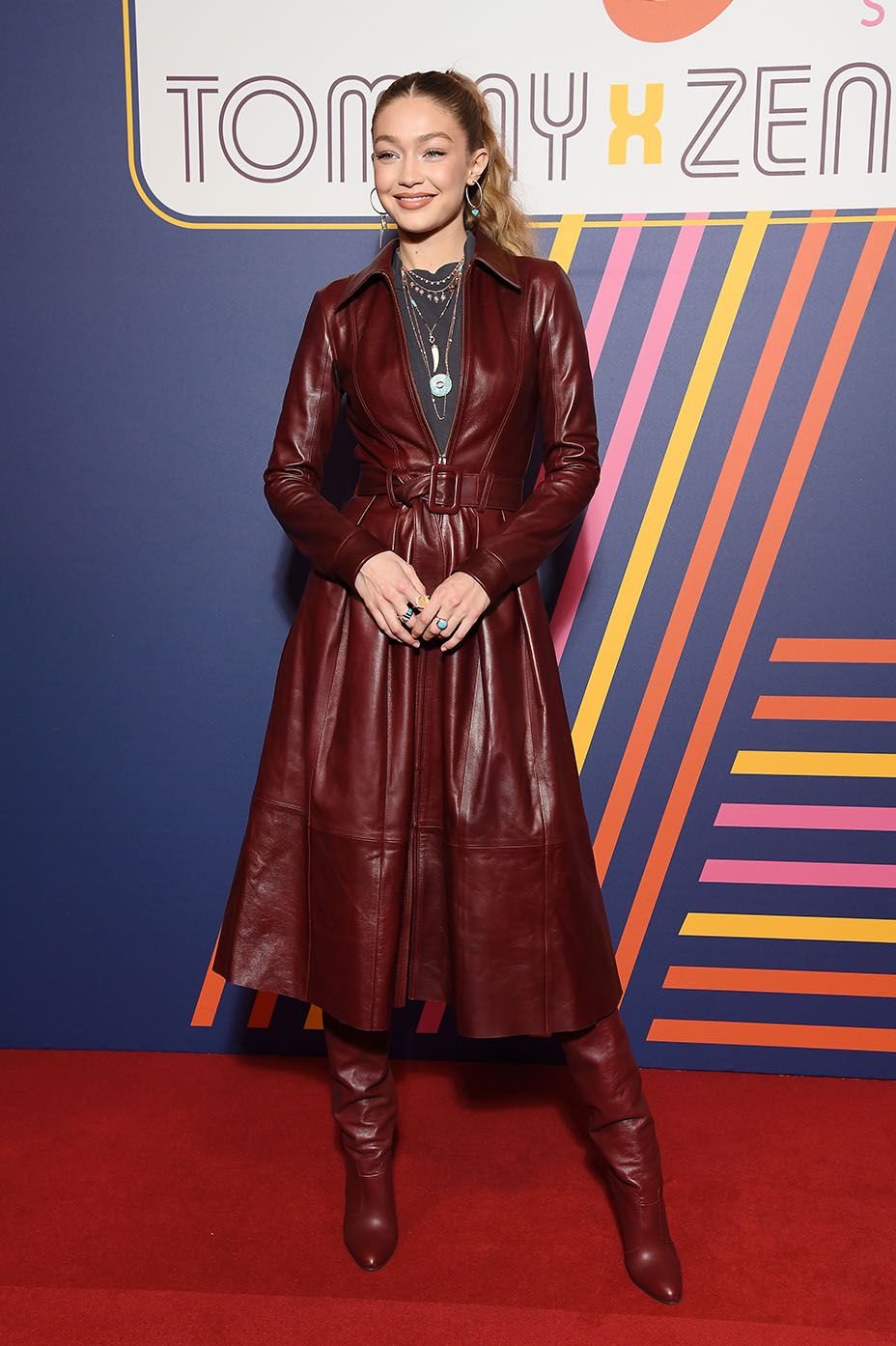 Hilfiger asked Zendaya to come on board after his collaboration with Hadid because he knew he had to follow up with something “phenomenal, because it was so successful,” he told THR. “A movie star, a music star, a TV star and a person with such an incredible reputation at only 23 years old, I was thinking that she would be great for us. What I didn’t realize was that she has her own sense of style, which is on another level.”

Hilfiger says that he gave the actress full creative control. Zendaya found inspiration not only from Versailles, but also through old photographs of her grandmother and her personal mood boards. It was a nostalgic moment for Hilfiger: “I loved it because that’s when I started my company. It’s my favorite style — ever.”

The actress’ collection featured high-waisted flares, slinky disco dresses, satin tops and trenches. The designs showcased a smart take on the era, as they strayed from its more lurid looks (white bell-bottomed and ruffled tuxes anyone?). Still, the collection featured lots of Lurex, that sparkly 1970s material which inspires either love or loathing, but gave it plenty of shine. Overall, it was a sophisticated slant with fun twists on staples. 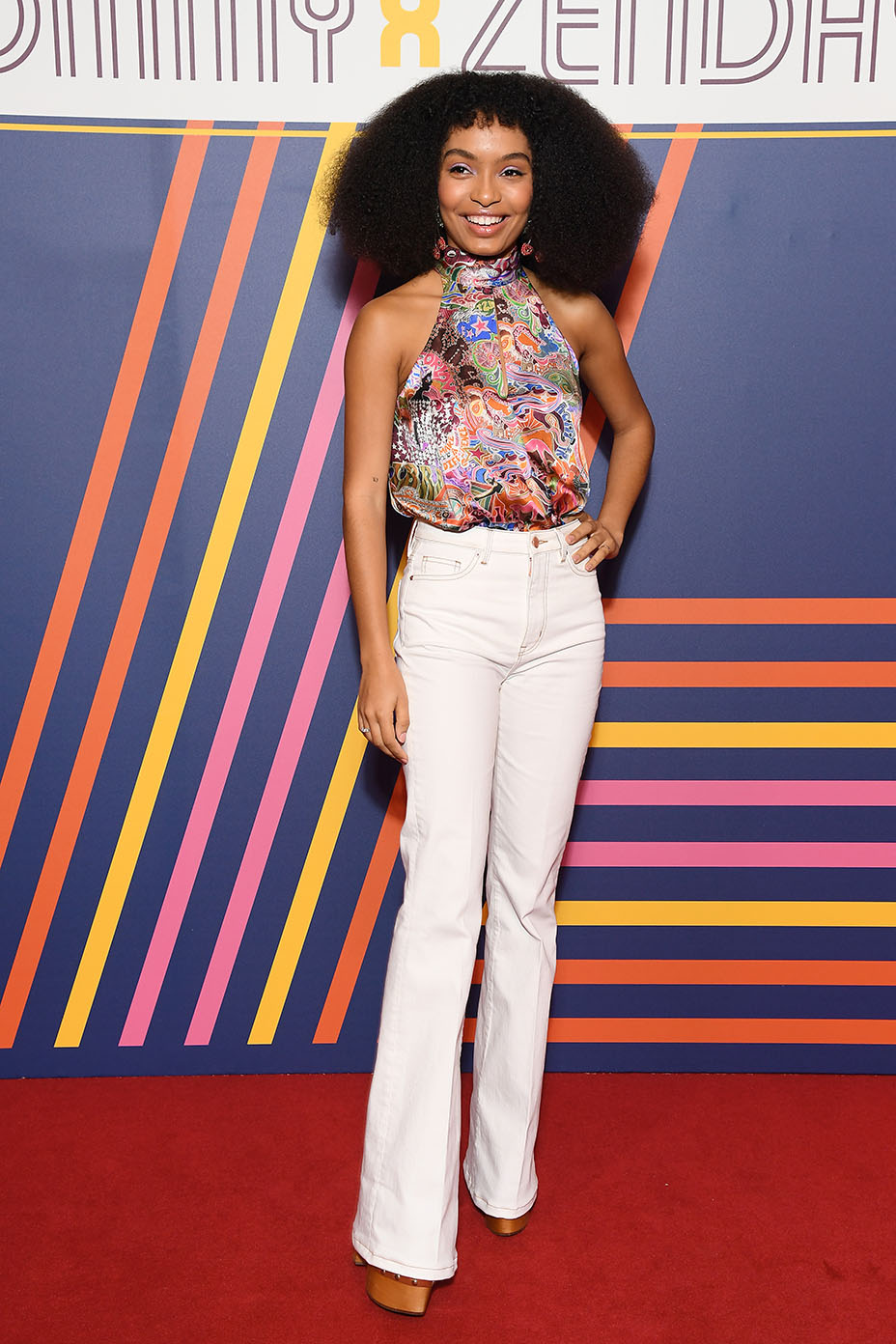 The collection also had a touch of the 1980s with oversized power pantsuits bearing broad shoulder pads. The collection was size-inclusive, too, with models walking side-by-side next to an outfit variation, meaning slim jeans on one look and a fuller skirt on another.

Jones closed the show in a gold lamé leotard and fishnet stockings, giving a few of her signature backside slaps towards the audience before Hilfiger, Zendaya and her beloved stylist Law Roach sang along to Sister Sledge’s “We Are Family.”