At age 14, Zendaya met her “fashion fairy Godbrother” in her stylist Law Roach — but he wasn’t one just yet. “He was a personal shopper for a mutual friend of ours,” Zendaya said Monday night at the InStyle Awards at the Getty Center. “Up until then I was styling myself at Target.”

The Euphoria actress continued, “I really did love fashion. He walked out with this gorgeous YSL bag and 14-year-old me said, ‘Is that YSL?’ And he goes, ‘But of course.’ And the love started there.… We were inseparable.”

Now she’s 23 and Roach quite literally became her fashion fairy Godbrother at the Met Gala in May. On that red carpet, Roach, wearing a blue hooded cloak and carrying a magic wand, lit up Zendaya’s Cinderella gown (designed by her collaborator Tommy Hilfiger) to create a show-stopping moment. 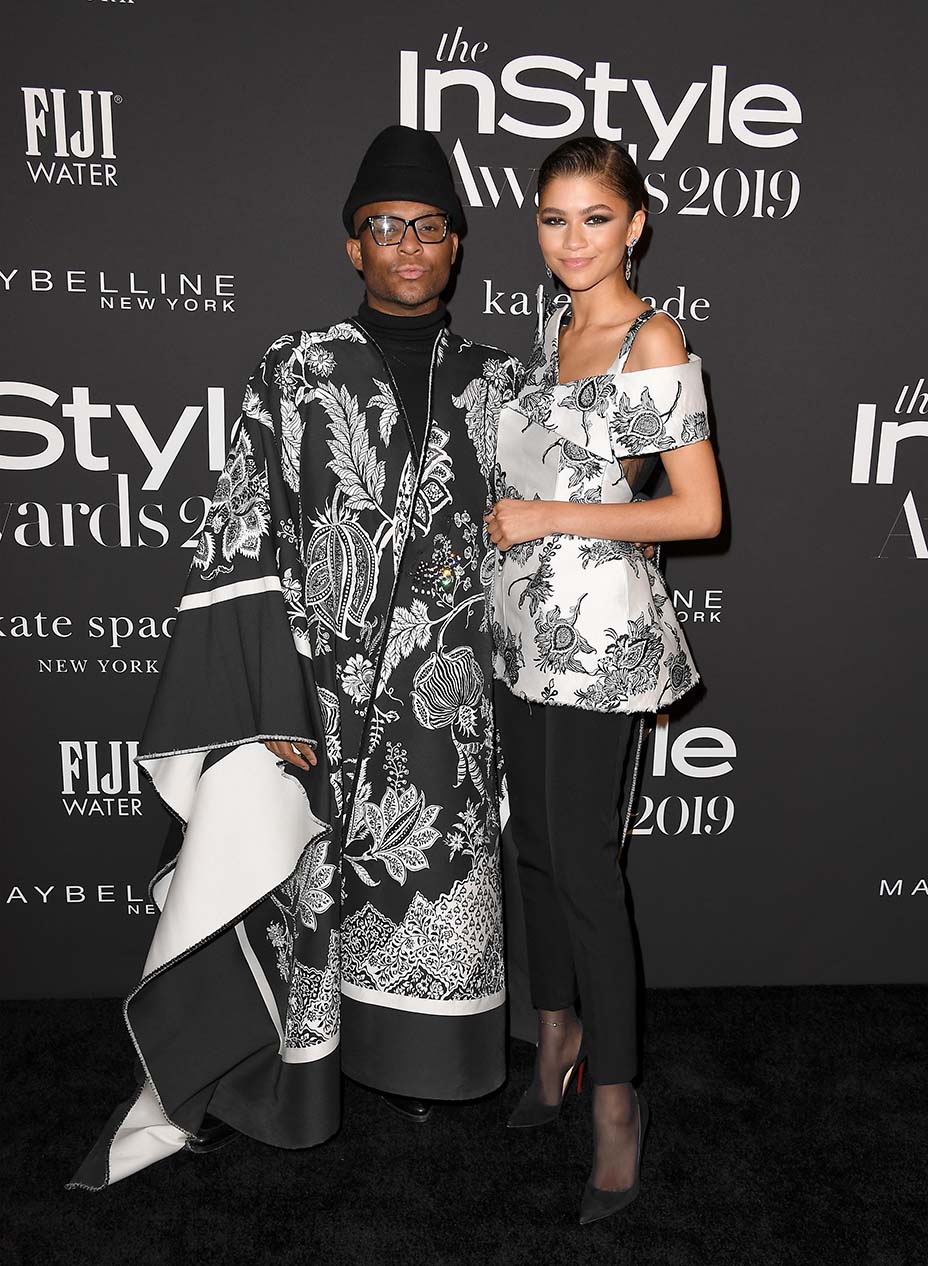 Zendaya called her stylist “an absolute visionary” who has “inspired me to be fearless.”

“You have taught me so much about myself, taught me to be more confident and not give a F about what people think,” she said. “You always remind me if I ever get nervous about my hair, my makeup, whatever it is, you say, ‘Do you really care what they think?’ And I always say, ‘Nope.’ And then we go.”

“There are so many young black boys that need you and it’s so impressive what you’ve done with your career,” Zendaya continued. “I’m lucky to be by your side and to be your creative partner.”

While accepting his trophy, Roach said, “I’m not supposed to be here. Where I’m from, no one makes it to these rooms and I’m just so grateful for that. I stand here for two reasons. One, that somebody told me I was special and two that somebody gave me an opportunity.”

He told the crowd — which included Olivia Munn, Hunter Schafer, Storm Reid, Judith Light, Natasha Lyonne, Kaley Cuoco, Lana Condor, Laura Harrier and January Jones — that they hold the opportunity to help somebody else. “If you are a person of power or privilege, I beg you to give that opportunity to someone who does not look like you. And that’s how it becomes another me.… I want to thank everybody who looks like me, who are joining the fight to make sure we have a seat at the table.”

Layne further spoke about the importance of representation for people of color. “It’s no secret that historically for black women, and especially black women with my complexion and my hair texture, this industry hasn’t always been kindest to us, nor have they always left us the space to represent ourselves in the most authentic way,” she said, adding that on red carpets she intentionally wears natural black hairstyles. “Hairstyles that often we’ve been told aren’t good enough, aren’t professional, don’t belong on this carpet in a custom Dior gown and I’m saying, ‘Yes they do.’… So that in time if a little black girl looks at me and she says, ‘Wow, Kiki Layne is so beautiful.’ Well I’m hoping that she’ll be able to say that same thing about herself.”

Stenberg had praised the Beale Street actress’ sense of style while presenting her “sis” with the honor. She said Layne wears “cornrows serving as a crown” and “socks and sandals to the Met Ball because she’s fly like that.” She recalled a moment after the 2019 Oscars: “For the afterparty, she changed into a silver gown that hugged her body and she wore her kicks so she could dance. That girl does not need heels, by the way. That image is one that will stick with me forever. Just Kiki glittering and twirling.” 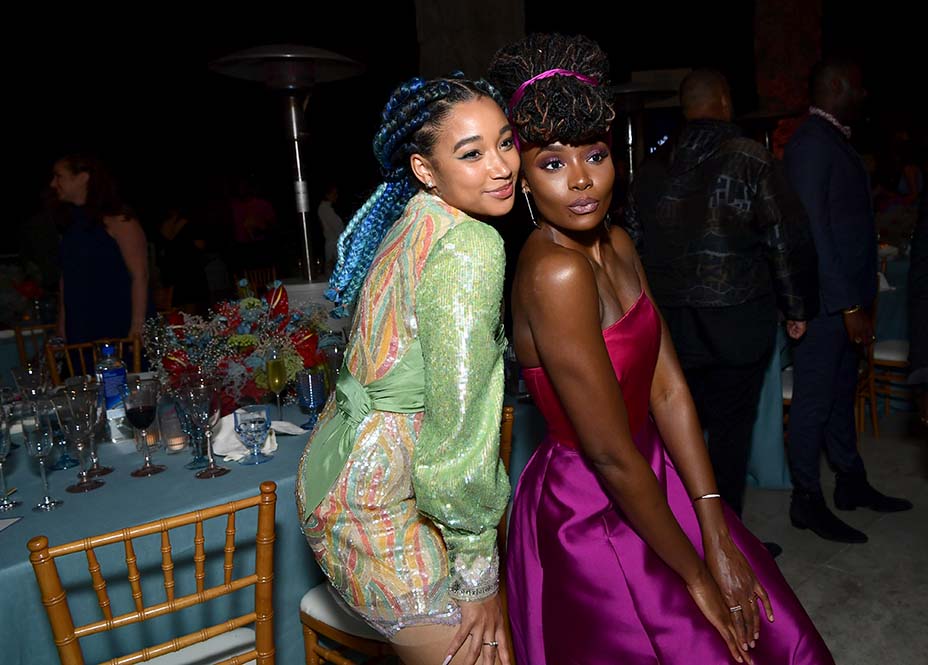 During the InStyle Awards, several stars and their styling teams got emotional while speaking about their friendships and their work. Dunst honored the Mulleavy designer-sisters, whom she’s known since her early 20s. The actress, who modeled for Rodarte’s recent dreamy look book, explained that she wore three dresses from their first-ever collection on her Spider-Man press tour. “This homegrown Californian collection was some of the most inspired and beautiful designs I had ever seen,” Dunst said of the Pasadena natives.

“Laura and Kate’s creativity comes from something so personal and emotionally moving that their dresses almost feel like songs on your favorite album. Sometimes you meet people and you know you’ll be friends for life,” she added while tearing up. “Sorry guys, I hate giving speeches when I love people. The worst.”

Dunst continued, “When the world makes it hard to be creative women in our industries, we had each other’s back and we built each other up. We throw Christmas prom dances, which some of you have been to, and have Sunday dinners together. I love them so much and I’m lucky to call them my sisters. Laura and Kate are pioneers in the fashion industry.” (Laura Mulleavy echoed the difficulties of making it in the fashion industry: “It may seem like there’s a lot of female designers but it’s a hard road.”) 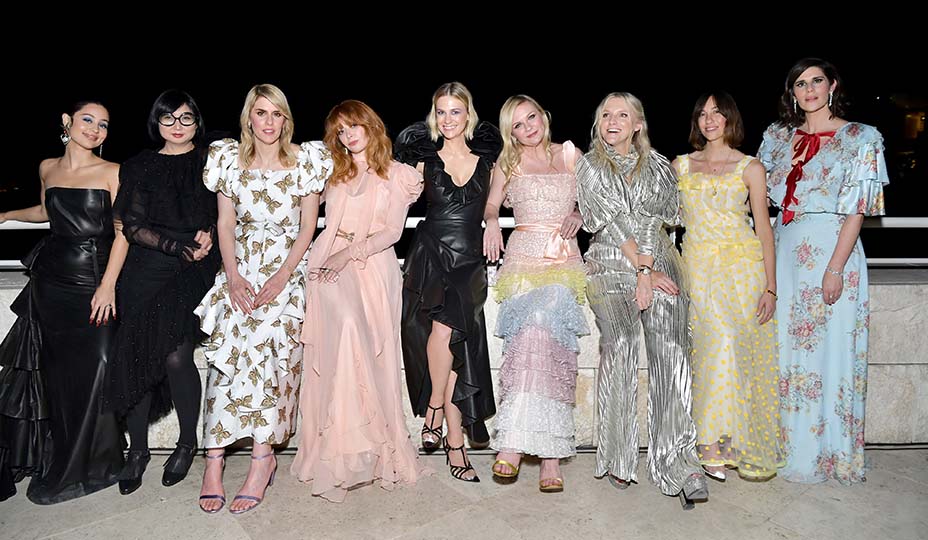 Things also got personal for Martin, who remarked that “the most defining moments of my career have not been the beautiful looks that we do on the red carpet or in front of the camera, but it’s about the relationships I’ve been able to cultivate,” he said. “For my clients, makeup is more than just…a trendy color on the eye. It’s about seeing the empowerment, confidence, strength and courage that they project when they have it on.”

He finished by thanking his royal client, Meghan Markle, who was in the news this week for opening up about her vulnerability and saying that “not many people have asked me if I’m OK.”

“Last but not least, I’d like to thank my dear friend Meghan. Meghan gave me an incredible gift of sharing my artistry with the world on her wedding day, a gift that has enriched and changed my life forever. We love you Meghan, thank you,” Martin said. 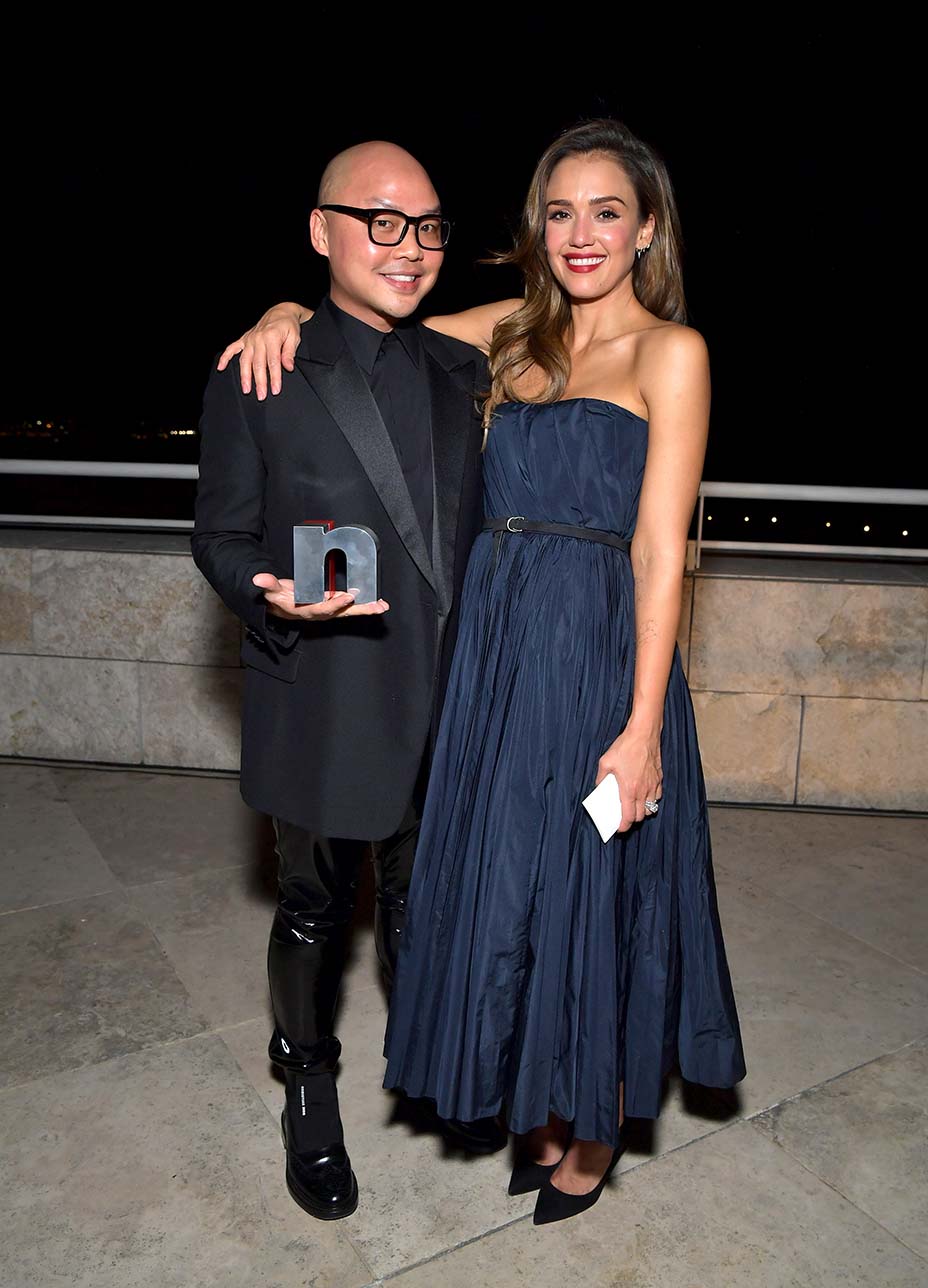 Toward the end of the night, after guests had savored a citrus salad and halibut with farro verde chestnut cream, honorees got a little looser and began joking about their accolades.

Louis-Dreyfus joked: “My publicist Lindsay Krug, she calls me and she says I’m going to receive the InStyle Icon Award and naturally the first thing I ask her is, ‘Oh good, who did I beat?’ And she says, ‘Well no one. No one else was actually nominated.’ And I said, ‘What the hell, I didn’t beat anybody?’ And she says, ‘No no no. Don’t look at it like that. Look at it like this — you beat everybody.’ And that made me very very happy.” The Veep star went on to recall one of her first chic outfits at age 7: a gingham pink bikini with ruffles and white patent leather go go boots. “God damn it, I looked so good,” she laughed.

“For women, style is complicated. it can be liberating and joyous when it’s artful and communicates something real and powerful and genuine. And it can be an exploitative drag when it does not,” Louis-Dreyfus said. “With the help of my team’s hard work and a shit ton of smoke and mirrors, I can look pretty decent.” 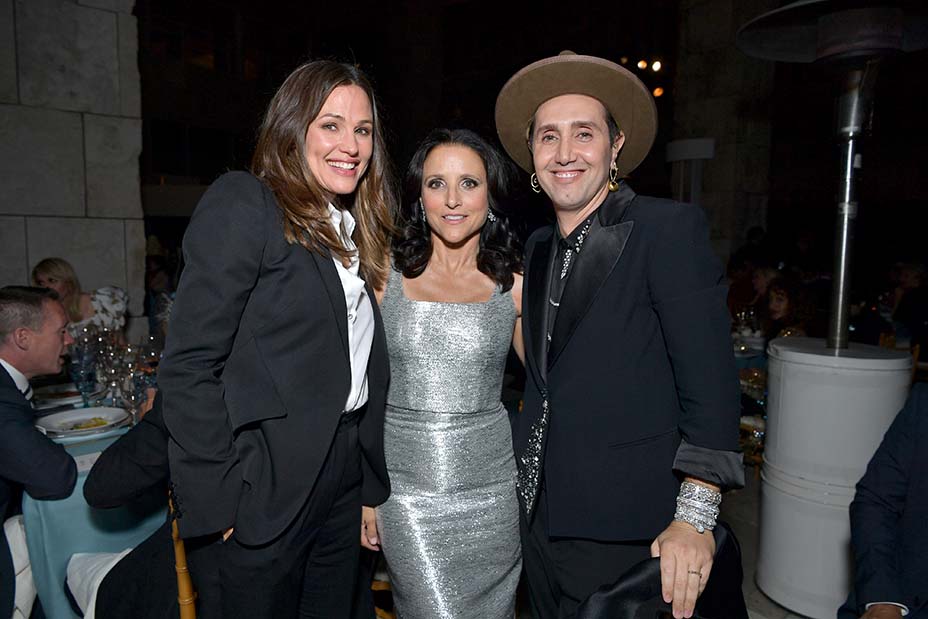 Carden had the audience laughing when presenting Hader with the Man of Style award. “When I think of Bill Hader, the very first thing that comes to my mind is fashion icon,” she said. “The fashion moments that I have been lucky enough to witness, I can’t even explain it, you guys. The T-shirts. The denim. And don’t get me started on the hoodies.”

Hader took to the podium and agreed with his Barry co-star: “This is hilarious that I’m getting this award. And when I told people I was getting this, they were like, ‘Oh Punk’d is now back as a show again?’”

The comedian explained that “my fashion look forever was like guy at Vons at 3 a.m. buying ice cream,” but at the urging of his assistant, he got a stylist — that would be Mark Holmes. “He came to my house and he was like, ‘What. Uh no.’ You’ve never heard the word ‘No’ so many times,” Hader said, before later pausing during his speech. “We’re all drunk, right? I think it just kicked in as I got up here.” The tipsy crowd giggled in agreement. 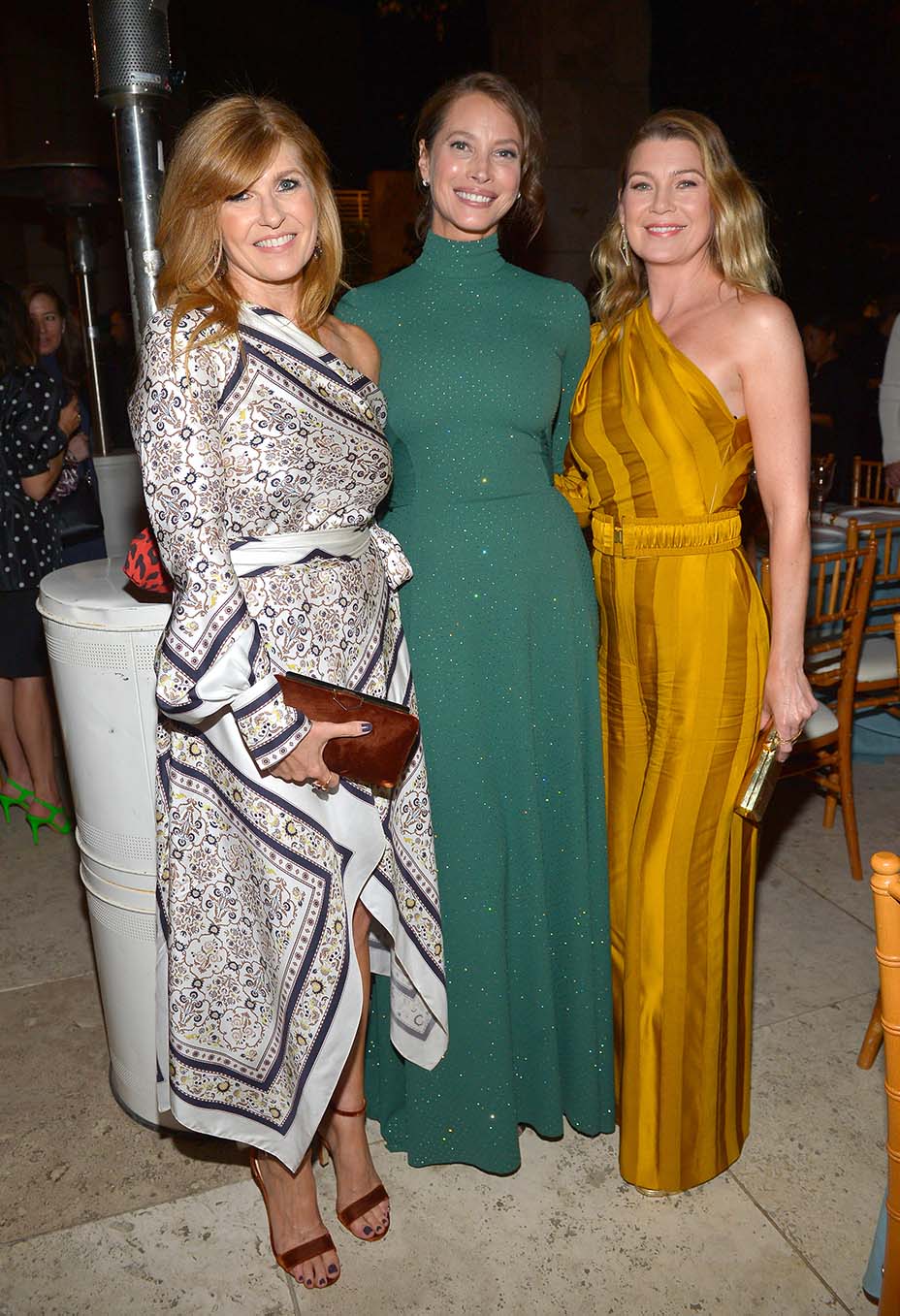