Jane Levy is in nearly every single scene of NBC’s musical dramedy Zoey’s Extraordinary Playlist — she does play the title character, after all — but she put in extra work for Sunday’s episode, “Zoey’s Extraordinary Glitch.” Instead of hearing other people’s innermost thoughts via song, she can’t help but express her own feelings via song and dance at incredibly inappropriate times (to the shock and worry of the people around her).

“I was so stressed about it. I had a nervous breakdown in anticipation of this episode,” she told The Hollywood Reporter of the preparation involved — recording vocal tracks on weekends, squeezing in wardrobe fittings, getting her roots touched up (“I’m not naturally a redhead, everybody reading!”), and pausing filming for three days to learn the choreography for each of the songs she sings. “I really wanted to do a good job. And I just was panicked that we weren’t going to be able to pull this off.”

So as the rest of the cast and crew spent some downtime with their families, executive producer and choreographer Mandy Moore spent 10- to 12-hour days crafting intricate numbers. “And we pulled it off, goddamn it,” cracked the star.

The result is a very funny hour filled with physical, slapstick humor and a tear-worthy emotional revelation at the end.

“I watched this episode last week with my boyfriend and I was full-belly cackling at the ‘Pressure’ number. And he looked at me and he was like, ‘You know, it’s not cool to laugh at your own jokes, right?’ But I thought it was really funny as well,” Levy admitted.

“I forget what it feels like to put on pants,” she joked. “Tomorrow I might be doing some sort of on-camera interview with my phone and I was like, ‘Whoa, whoa, whoa, whoa, whoa, whoa.’ My boyfriend took out my hair extensions with pliers and gave me two haircuts. So I’m not sure I’m ready for the camera during this quarantine.”

Below, the actress tells THR about the work involved in prepping for the episode, her thoughts about the love triangle between Zoey and her coworkers Max (Skylar Astin) and Simon (John Clarence Stewart), and what she’s doing to cope with her coronavirus lockdown anxiety.

This episode is very funny, but it very quickly swings to a tearful, emotional moment. What’s it like to span that full range of emotion in one episode?

It’s really what you wish to have as an actor. You want to be able to stretch yourself and do it all, at least for me, and this episode was an opportunity to do that. I do slapstick comedy, physical comedy, clowning, farcical comedy, extremely emotional family drama, dancing and singing. I get to be sexual and cute, and I fall apart and I’m neurotic and I am psychotic. It was really fulfilling, you know? And like I said, in anticipation I was losing my mind and I was losing sleep. But actually doing it was so fun, and it’s really rare as an actor that you get to work on material that speaks so directly and specifically to your sensibility and your sense of humor and your pain. I said to Samantha McIntyre, our writer of this episode, “I feel so seen.” I feel like it was written for me. And I guess in some ways it obviously was.

Do you sing a lot normally?

I’ll say that it causes a lot of stress. Dancing I enjoy so much that I’m not hard on myself, whether technically it’s right or not. But there’s something about singing that I can’t. I have no chill. Leading up to the season I was taking vocal lessons, and I got a lot of advice from my co-stars. Eventually I stopped thinking about whether I sounded good and I was more interested in telling the story of Zoey. So some of the numbers in this episode I pre-recorded and some of them I sing live, and then some of them are a mix of the two. But most of the time when the music cuts out and it’s back to reality that’s me singing live on set. It turns out crying and singing is very complicated, and crying and lip syncing is equally as complicated.

Did you request any specific songs for the episode?

It’s what they wrote. Austin [Winsberg, creator] would say early on, “This is the song we’re thinking,” and I would say, “Oh, I love that song.” [The finale of the episode] was a song that he told me about very early on, and so I had been singing that practicing for a couple months leading up to this episode. It’s such a universal human condition to feel like how can I survive losing you, whether that’s a parent or a friend or a romantic partner. And so that song really cuts deep for me personally. 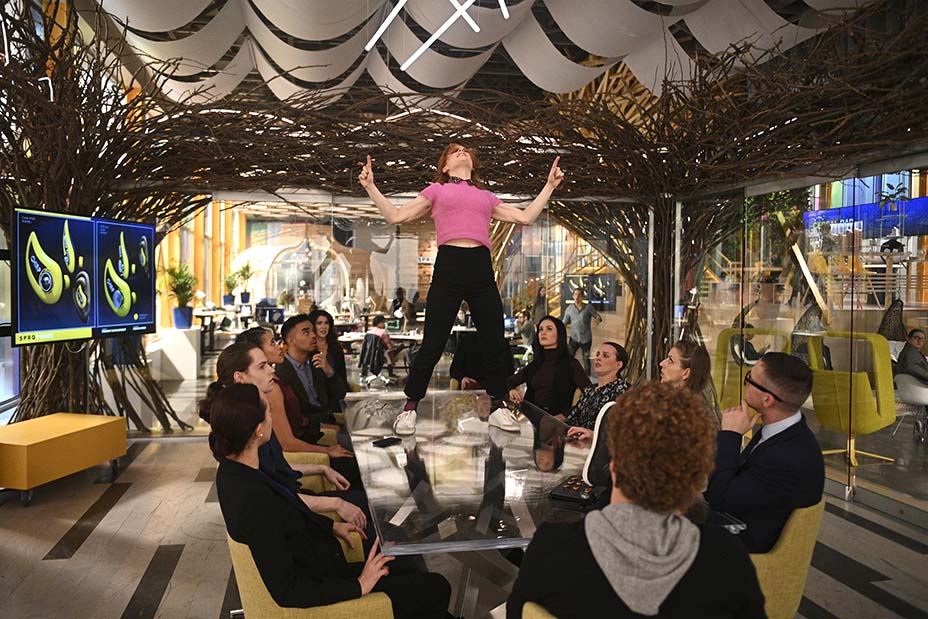 Zoey articulates her feelings about both Max and Simon for the first time in this episode. Who are you rooting for?

I, Jane, hold the position of, okay, so what? Zoey, maybe deep down is in love with her best friend and also wants to have sex with her coworker. She doesn’t have to do anything about that. She doesn’t owe either of these men an answer at this point in time. She has a goddamn power that was inflicted upon her by who knows what, and so she spills the beans. But to me, it’s like that is so normal and I kind of want to tell both of the men to give her a goddamn break. You know? She’s about to lose her father, she’s not in any position to be rational with her emotions.

How have you been spending your time recently? Have you watched anything comforting or fun? Are you doing a lot of FaceTiming?

I’m doing a lot of FaceTiming with every single person in my life. I have been doing a lot of organizational work at my house. I haven’t been home for more than a week at a time in eight months, so I’m definitely home right now, and I’m going through old papers and cleaning and I’m doing a lot of cooking. My aunt is a yoga teacher and every day at 4 p.m. my family and I — my mom, my cousins, my brother, my brother’s baby — we all have a Zoom meeting at 4 every day and she teaches us yoga, which is really nice.

I watched the entirety of Tiger King in two days. Full disclaimer: It gets dark and very sad. I’ve been watching Devs every week when it comes out on FX on Hulu. I really, really like the show. I’m reading. I just finished this morning Catch and Kill by Ronan Farrow. And I actually had a bibliotherapy session yesterday — this woman in London created this program where you fill out an application and then you Skype with her and you talk about yourself and what you’re going through, and she prescribes you fiction. So I’m excited to find out the six novels that she recommends for me and I’ll read those. I’ve also been gardening. Yesterday I planted two avocado trees and a Mexican lime tree and an herb garden. I’m trying to limit my time on the news because it’s really scary and causing sleepless nights. Of course I want to stay informed and aware of everything, but just try not to inundate myself with all the scary information.

I definitely feel productive! I bought a mini trampoline and jumping on that is really fun. I recommend it to all.