Fox raised the bar in the live TV musical renaissance with its 2016 entry, a zesty take on Grease staged by Hamilton director Thomas Kail that upped the excitement level with a live audience and inventive physical use of multiple sets and locations on the Warner Bros. backlot. Another Broadway veteran, Scott Ellis, takes the helm on A Christmas Story Live!, teaming with the same live-television director, Alex Rudzinski, and shooting at the same studio with similarly dynamic results. This production’s chief shortcoming is that it lacks the advantage of instantly recognizable songs and edgy material. But the show’s wholesome Middle American pleasures no doubt sparked plenty of smiles, especially for lovers of the source material.

When it bowed on Broadway in a limited 2012 holiday-season engagement, A Christmas Story: The Musical was a surprise critical hit, disarming Scrooge-like reviewers with its cornball humor, unabashed sentimentality and tuneful 1940s-style retro songs by Benj Pasek and Justin Paul, who would go on five years later to win an Oscar for their La La Land lyrics and a Tony for their Dear Evan Hansen score. Conjuring a less jaded time of more innocent rewards, the fuzzily nostalgic show used its Broadway launch as a springboard for popular regional bookings, becoming a durable seasonal staple and an entertaining adjunct to the 1983 MGM movie, which pretty much plays on a loop every Christmas on cable. Still, it’s relatively unknown by the standards of other musicals that have received the live-TV treatment.

The Bottom Line Old-fashioned family fun for the holidays; cynics need not apply.

Serving as narrator, Matthew Broderick steps in for radio personality Jean Shepherd, whose humorous semi-autobiographical stories about his Indiana childhood, In God We Trust, All Others Pay Cash, provided the narrative bones of the film. Broderick’s sleepy everyman shtick made him an ideal fit for the wistful adult Ralphie Parker — in addition to multitasking in roles ranging from a department-store window cowboy to a radio quiz show-host. When he connected over a dropped mitten in the show’s final moments with his childhood self, played by the exuberantly likable Andy Walken, viewers could be forgiven for getting a little misty-eyed.

The producers clearly understood that the appeal of the material lies in its evocation of a pre-cynicism America, when a kid could yearn for a Red Ryder Carbine-Action BB gun from Santa without invoking the NRA or sparking a firearms debate. And letting slip a profanity could unleash the fear of death as punishment — or at the very least, getting your mouth washed out with Lifebuoy. In an age when most children are glued to their tablets before they even acquire full verbal skills, and superheroes have long since supplanted home and hearth at the center of the entertainment universe, there’s something refreshing about this musical’s old-fashioned ethos.

Only in a disposable intro that appeared to be lip-synched and pretaped, in which Bebe Rexha sang a contemporary-poppy new composition called “Count on Christmas,” did the presentation stray from its core values. Elsewhere, the Norman Rockwell-style freeze frames that returned us from commercial breaks, or the shots of period autos seen gliding by through the Parkers’ living-room picture window, pretty much set the tone.

Even with the occasional audio glitch or flubbed line, the stagecraft on display was impressive. The co-directors threw down the gauntlet from the start with a technically complex opening that moved with cinematic fluidity via multicamera setups and some handheld sequences from a snowy street in fictional small-town Indiana into the Parker home and then out again as the family piled into the Oldsmobile and headed to Higbee’s department store for the unveiling of the Christmas windows. Mashing up the ensemble’s “It All Comes Down to Christmas” with Ralphie’s “Red Ryder Carbine Action BB Gun” also ensured that the musical energy matched the occasionally frantic visuals. 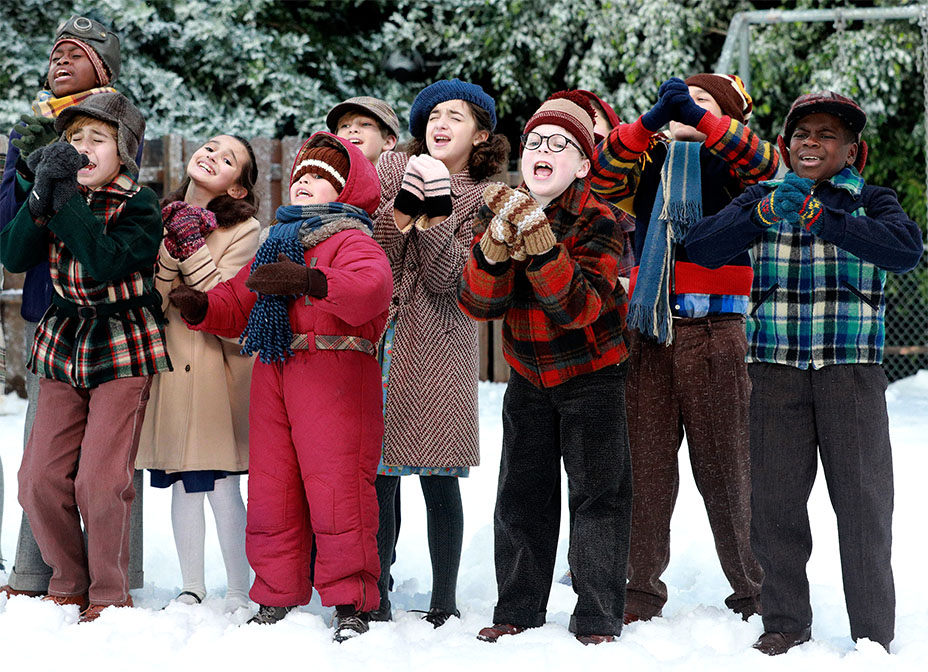 The story, for that slim percentile that never caught the movie, basically outlines the daunting series of obstacles that lie between Ralphie and the fulfillment of his Christmas-morning wish. That includes the disapproval of his mother (Maya Rudolph), the first of many to warn, “Oh Ralphie, you’ll shoot your eye out”; the volatile temper of his “old man” (Chris Diamantopoulos); and the daydream of support that turns to opposition when his class essay fails to convince his kindly, OCD-rattled elementary-school teacher, Miss Shields (Jane Krakowski).

All the familiar components are here — the kid with his tongue stuck to a frozen flagpole, the dreaded pink bunny suit, the cocoon-like winter wrap-up of Ralphie’s kid brother Randy (Tyler Wladis), “like a tick about to pop.”

Other rousing numbers included the yippee ki-yay action of “Ralphie to the Rescue,” in which he imagines himself as a hero of the plains, saving Miss Shields’ maiden in distress in a black-and-white Saturday-matinee adventure. And Krakowski got to show off her hoofer skills in a beaded, va-va-voom number (William Ivey Long did the period costumes), leading a chorus of youngsters in “You’ll Shoot Your Eye Out.” If some of the kids’ ensemble dance numbers were more enthusiastic than tight in the choreography department, the performers were endearing enough to get away with it.

While the presentation adhered largely to the existing stage musical, the most notable new number went to the Parkers’ neighbor Mrs. Schwartz, played by the marvelous Ana Gasteyer, who raised the flag of religious inclusiveness by declaring, “A Jewish mother knows best.” Her song, “In the Market for a Miracle,” was a Hanukkah hoot, with droll lyrics like, “Raise it up for the Israelites/Give it up for eight crazy nights.” And the movie’s most groan-inducing moment of retrograde racial stereotyping, in the final-act Chinese restaurant scene, was given a smart makeover with a wink from Ken Jeong as he ushered on an Asian a cappella group doing a perfectly enunciated “Deck the Halls.”

Given the obvious attempt to reach a new audience of kids along with those who grew up on the film, A Christmas Story Live! perhaps outstayed its welcome at three hours with commercial breaks. By the time a chorus of children in pj’s sang “Somewhere Hovering Over Indiana” while making snow angels, many younger viewers might already have drifted off to bed. But sponsor demands being what they are, that was probably unavoidable. One of the more confusing ad breaks was an extended live commercial for The Greatest Showman, featuring Hugh Jackman, Zac Efron, Zendaya, Keala Settle and hordes of dancers performing one of the upcoming Fox release’s original songs, which also were written by Pasek and Paul. As a promo stunt, it was nothing if not audacious.

As for the game actors in the main event, everyone embraced the spirit of the enterprise with infectious enjoyment. Rudolph hit a bum note or two but showed her chops as a seasoned live performer with her customary warmth and spontaneity. The supporting players included Fred Armisen as an irascible head department store holiday elf, and David Alan Grier as a grouchy Santa Claus. And the end credits included not only stage bows for the various ensemble groups and principals, but also some delightful behind-the-scene snippets to show how much planning and nimble workmanship goes into the execution of one of these TV events.

Many will quibble about the choice of a musical that’s not widely known, but on the whole, this was nicely done.