The key to casting Jesus Christ Superstar, the bold-for-its-time musical retelling by Andrew Lloyd Webber and Tim Rice of the last week in the life of the carpenter’s son from Nazareth, is accepting that contrary to the title, it’s all about the conflicted villain of the piece. Jesus is a figure too loaded with symbolic weight to allow for much dramatic nuance beyond introspective intensity. And alongside him, Mary Magdalene is a heartsick handmaiden. But Judas Iscariot, the outspoken apostle who sees all too clearly the dangerous threat Jesus poses to the Roman Empire and tries to warn him — before taking steps that would make his name synonymous with betrayal — is the dynamic force that shapes this version of the centuries-old narrative.

So hats off to the producers for making astute choices in the breakdown of seasoned pop performers and stage actors with the dramatic chops to back up their vocal talents. While John Legend’s gentle charisma and honeyed pipes made him an affecting Jesus, and Sara Bareilles’ soulful way with a song proved a superb fit for Mary, enlisting Brandon Victor Dixon — last seen on Broadway as Aaron Burr in Hamilton — was the crucial piece of casting.

But here’s the thing: This was a phenomenally balanced production of Jesus Christ Superstar, in which star power was equaled by depth of feeling and characterization in all the principals. And the immediacy of television, with close-ups capable of bringing us in tight on the performers’ faces, gave Jesus and Mary Magdalene a complexity that often is missing from conventional productions.

A slight departure from the formula established in recent years for live television musical events, Superstar was less a studio-bound traditional theatrical production than a fully staged concert as the title suggests, performed at the cavernous Marcy Avenue Armory in Williamsburg, Brooklyn. Pulsing with kinetic energy right from the overture, the show was a thrilling hybrid of Broadway and arena spectacle, taking the material back to its roots, and you could feel the excitement in the live audience even at home.

NBC gave the show a breathless promotional push, blitzing viewers with teaser trailers and clips that underlined the modernity and relatability of this Messiah-as-man account. A special 70th birthday tribute to Andrew Lloyd Webber also aired, basically an hourlong infomercial for the Sunday broadcast rendered fairly insufferable by Glenn Close and Lin-Manuel Miranda throwing fawning softball questions at an interview subject who appears to require no help massaging his own ego. 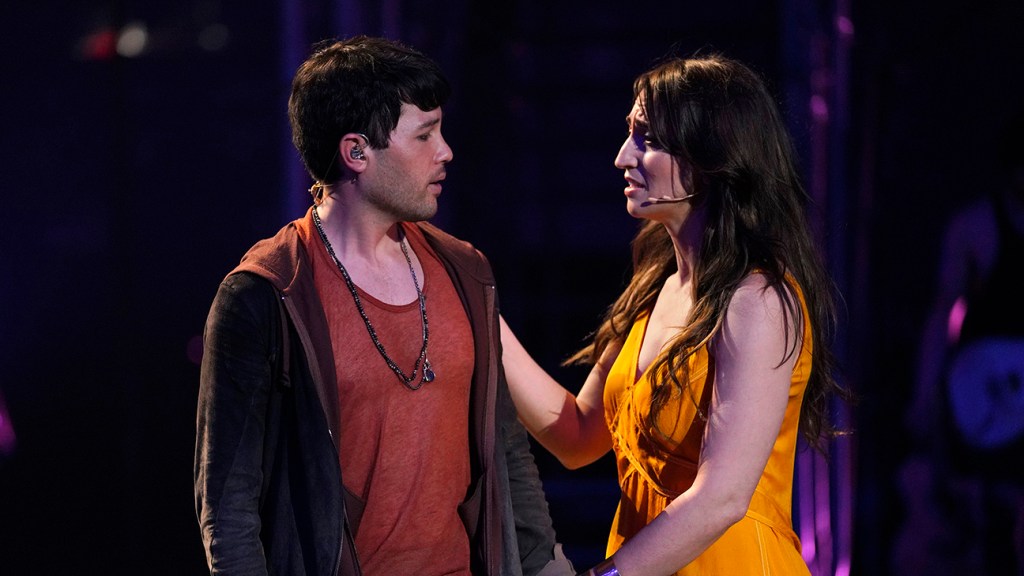 But Lord Luvvy Lloyd Webber’s absence of humility aside, the sung-through show has withstood the test of time remarkably well. Released as a concept album in 1970, it was scaled up for Broadway the following year and has pretty much been playing on tour or in revivals at least somewhere on the planet ever since. Norman Jewison’s 1973 film version framed the material with a countercultural theater troupe arriving by bus in a Middle Eastern desert to perform the musical Passion Play. And while very much of its time, the movie is still a guilty pleasure, despite Ted Neeley’s Jesus being as wooden as the cross he’s nailed on. In any case, I’d much sooner take that than Mel Gibson’s 2004 torture-porn version, The Passion of the Christ.

It pains me to admit being old enough to remember when the musical was more groovy than kitschy, but that gives me inbuilt affection for this tuneful rock relic, with its wailing guitars, funky synthesizers, screeching flights of male falsetto and melodic pop ballads — even Rice’s occasionally cheesy lyrics. The most recent Broadway revival, in 2012, was a commercial disappointment despite Josh Young’s electrifying Judas, but it proved decisively that the show is more durable than that other biblical rock musical of similar vintage, Godspell, which now seems hopelessly hippy-dippy and twee. Apostles doing jazz hands just feels wrong.

As has become customary since the resurgence of the live TV musical, directing duties on Superstar were split between an experienced stage pro (in this case Brit veteran David Leveaux) and a live television director (Alex Rudzinski, whose work with Thomas Kail on 2016’s Grease Live! up to now remained the gold standard of the recent crop). Fortified by Camille A. Brown’s spirited choreography, the directors’ use of the vast space throughout was exemplary.

The show got off to a rousing start, with an all-female string quartet taking the stage to establish that musicians would be moving freely among the racially inclusive ensemble, outfitted like punked-out, grungy hipsters. A flaming cauldron was lit — Olympics-style — as the guitars came in and a performer spray-painted the name “Jesus” across the main wall of a set wrapped in scaffolding. By the time the walls parted for Legend’s Jesus to make his Divine entrance, the audience was already on fire — even more so once the star started touching the sea of outstretched hands from the mosh pit.

Dressed to slay by costumer Paul Tazewell (Hamilton) in skin-baring black leather vest and pants, the buffed-up Dixon set the bar high with a hard-driving “Heaven on Their Minds.” And Bareilles maintained the standard with a gorgeous “Everything’s Alright,” in saffron robe and sandals. Both here, and later on in “I Don’t Know How to Love Him” and “Could We Start Again, Please?” she put her own expressive stamp on the phrasing of songs that musical theater fans know by heart.

Also among the early highlights, Swedish metal rocker Erik Gronwall tore into “Simon Zealotes” with transporting, well, zeal, while as the high priests Caiaphas and Annas, Norm Lewis and Jin Ha sounded as commanding as they looked in their futuristic black Matrix-style cloaks. The design work throughout was first-rate, and the fluidity of the multicamera visuals gave the whole show a vitality that’s rare in a filmed stage performance. 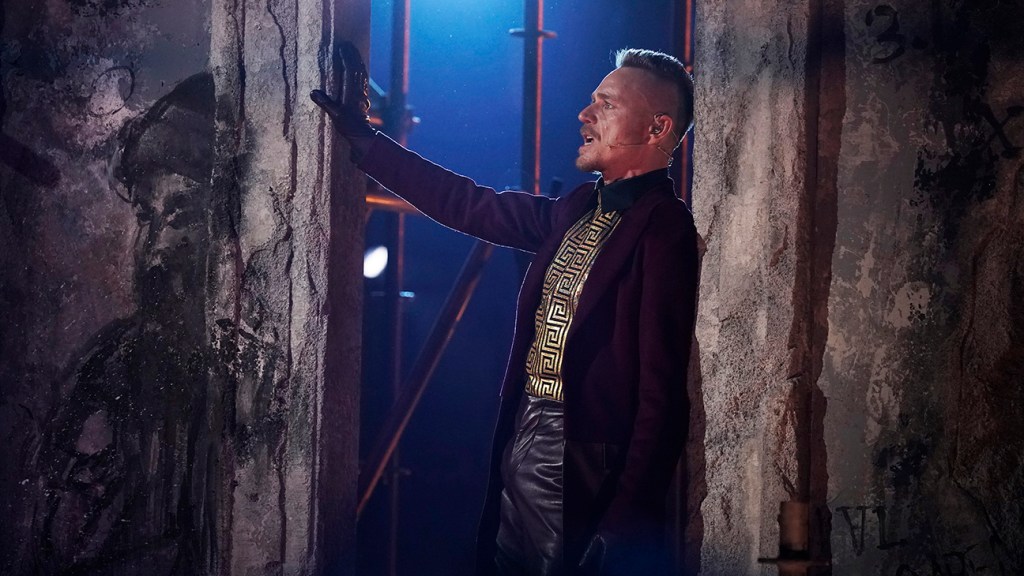 The big test for Legend was “Gethsemane,” and while he doesn’t have the authentic rocker voice for which that challenging soliloquy was conceived, he sang with tremendous power and aching sweetness on the high notes. There’s a beautiful, Buddha-like serenity to the star’s features that made him a perfect fit for the character, but the added bonus was the gravitas he brought to Christ’s big moments, when the end becomes clear.

As Pontius Pilate, Ben Daniels looked resplendent in gold and burgundy, more than compensating for any vocal limitations with dramatic authority, even late in the show as his singing grew more ragged during the trial scene. And the lashing of Jesus — not by a single centurion but by a large section of the ensemble, taking turns in a sequence choreographed by Brown with fierce vigor — was shattering.

If the presentation of a tortured Judas hanging himself didn’t quite generate the required emotional impact onscreen at home, Dixon seized the stage as if literally reborn with his powerhouse take on “Superstar,” aided by a trio of sizzling backup dancer-vocalists. And the “Crucifixion,” staged with a brilliant scenic coup and heavenly lighting effects, was an airborne knockout. Truly transcendent.

In its careful planning and execution, this was a class endeavor all the way, with just one minor disappointment in the casting. Going for an iconic face rather than a nimble musical theater performer to play King Herod, the production settled for a near-immobile Alice Cooper, who was more of a sneering geriatric rocker than a mocking vaudevillian. Great to see him, but wrong kind of voice and wrong stage presence for the character’s sardonic ditty. While the showgirls in golden plumage were a hoot, even they couldn’t get the wheezing number off the ground.

But hey, that’s just nitpicking about what was otherwise an outstanding presentation. This is a demanding score to sing, and if there was any reliance on backing tracks it wasn’t evident to this viewer; the choral work behind the leads was exceptional. And Lloyd Webber showed shrewd judgment in robust orchestrations that straddled the divide between the music’s period origins and a more current sound. Whether the show succeeded in grabbing the young demographic NBC was aiming for won’t be clear until ratings numbers are in Monday. But for fans eager to see this blast from the past resurrected with freshness, passion and contemporary attitude, Jesus Christ Superstar Live in Concert delivered.